Mother’s Day Weekend and Spring is in the Air

The weekend turned out quite nice in the end. After a fairly damp camp with the Scouts up at Devil’s Bridge on Friday night, the sun came out on Saturday and temperatures reach 17.3ºC, the hottest day of the year so far.

A First Time for Everything

I spent the afternoon cleaning cars and working in the garden. Cleaning cars is something I rarely do, but seeing as it it a new car for me I wanted to look after it at least for a while and give it a good checkover. I couldn’t very well do mine and not do Anna’s though, especially as it was Mother’s Day the following day so I spent quite a while washing, waxing and polishing both cars. They do looke btter for it as well and for once in my life my car was actually cleaner than my bike. I couldn’t leave it like that for long though so washed and polished my bike too.

It was then time to do some work in the garden, mowing the lawn and generally tidying up. Morgan came out to help for a while as well and we got a fair bit done preparing beds for vegetables, edging borders and weeding. There’s still loads to do out there of course but it is beginning to look a little more under control.

Sunday was even warmer and my day started with my usual run and swim in Machynlleth. Nothing too special as far as that was concerned this week, but it was the first early morning run of the year without a jacket and hat. I then did some shopping for ingredients to make the latest recipe box we’d received from thespicery.com and headed back home.

We had sort of planned to join the Devils’ Bridge Walkers on their end of month walk but decided it would make more sense to have a fairly chilled day and hopefully get a few outside chores done too. We also had to pop into town for Morgan to spend his World Book Day voucher that was due to expire. So, after the obligatory phone calls to Mums we headed into Aberystwyth, did some shopping, took some stuff to the tip and visited the garden centre. This took longer than I thought so it was already mid afternoon by the time we got back, which didn’t leave a huge amount of time for gardening. Especially seeing as it was time for tea and cake first!

The sun was out though and temperatures were almost reaching 20ºC. They actually only made it to 19.3ºC here in Ynyslas, but that was plenty warm enough for a bee inspection and then some more gardening.

The bees seemed OK and were certainly bringing in lots of pollen.

We didn’t get a huge amount done in the garden today but we did plant out the things we’d bought from the garden centre, including a mile-a-minute plant for the pergola. We haven’t tried this before, but have so far been fairly unsuccessful at growing anything up over the pergola. It’s just so difficult to grown anything any higher than about 60cm here due to the incessant wind and salt spray, but we haven’t given up yet. Honeysuckle, Jasmine, Russian Vine, Ivy, Clematis, and many other things have all failed. Lets hope the mile-a-minute lives up to its reputation and grows like mad covering the pergola with a profusion of little white flowers.

With time running out we didn’t get around to sowing too many of the vegetable seeds that we had bought, but instead headed into the kitchen to cook up a delicious dinner using the latest recipe box from thespicery.com.

It may not have been the most pampered of Mother’s Day’s for Anna, but at least we spent most of it together and started to get on top of the garden. There’s plenty of things springing into life out there and the leaves are just emerging on the trees too. There’s a real feeling of Spring in the air at last and we can’t wait until everything is flowering and the beekeeping starts in earnest. 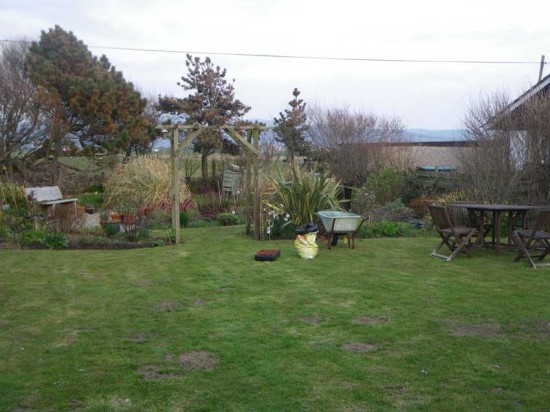