An Earth Cache at Ynyslas

We noticed that a new earthcache called Ynyslas Longshore Drift had been set up here during the week. Today was the first chance we had to get to it and luckily the day dawned bright and sunny. So, after breakfast we all put our shoes and coats on and headed off for a stroll along the beach.

As geologists we couldn’t really ignore an Earth Cache quite so close to home now could we, and it was a good excuse to get out of the house and into the lovely Spring sunshine. We were able to answer most of the questions without actually going there, but that wasn’t the point, and besides we needed to find the exact coordinates of where the pebbles end and that changes from day to day.

We first strolled along the road past all of the Spring daffodils and then across the path through the dunes which were still very wet in the slacks. 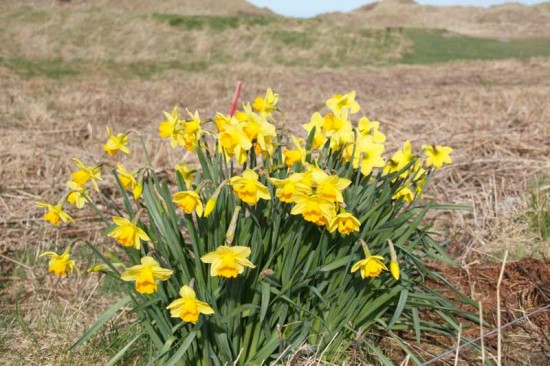 We then headed into the estuary where a speed boat was motoring across the mirror smooth water and a helicopter was flying overhead. We headed and around the point to the end of the pebbles where we could get the coordinates for question 3. 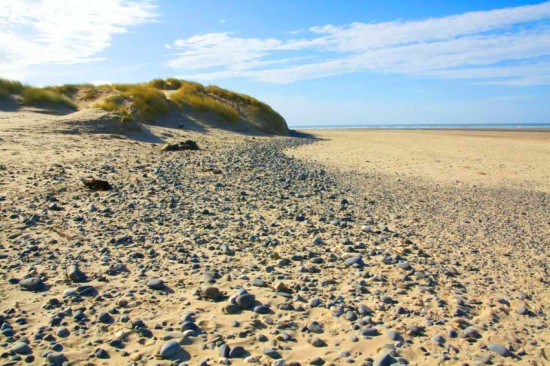 The questions we needed to answer were:

I won’t give the answers away here, but I did have to add a little to question four as I couldn’t resist it, so my answer to this (with the actual answer removed) was:

The white pebbles are made from ****** – however, this is not a rock, it is a mineral. There are also many more than two rock types that make up the shingle on this beach and in fact the provenance and variety of pebbles here is more interesting than most people would think. Most of them (other than those brought in by the recent storm defence work) were delivered to the area as glacial morraines from a huge ice sheet that covered much of Northern Britain. This means there are rocks from North Wales, Ireland, Scotland and even further afield. The pebbles are made from rock types including:

There are even pebbles composed of material from the submerged forest at the moment, thanks to the recent storms.

This has however given me an idea for an Earth Cache of our own based on these pebble types, so we may well have to set one up soon.

After recording the coordinates needed for question 3 we wandered back along the beach chatting and drawing pictures in the sand. It’s quite interesting to see how much sand has been moved around this winter though, and many of the lifebuoys that were on tops of fairly tall posts are now virtually buried.

Picture in the Sand

Not a bad way to start the day and we now have lots of gardening planned for the rest of the day. We’ve logged the find on the Earth Cache too and I’m pleased to say that we got an FTF for our efforts – not that  a stroll along the beach was particularly strenuous!