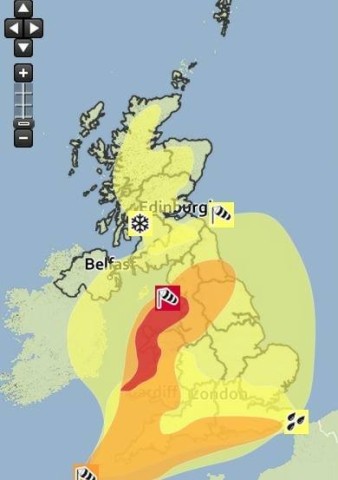 During this afternoon a swathe of exceptionally strong winds is expected to affect western parts of Wales and then some northwestern parts of England this evening, particularly in coastal areas. Winds are expected to gust 80 mph widely and possibly reach 100 mph in the most exposed locations in west and northwest Wales.

Winds of this strength can cause widespread structural damage, bringing down trees and also leading to loss of power supplies. In addition, large waves are likely to affect some coasts. The public should take action to alter their travel arrangements during this spell of storm force winds.

I’ve strapped down the beehives so have taken some sort of action but I’m not really sure what else I can do? Although I am contemplating a wind assisted Strava segment along the Golf Course mile… Surely with a 100mph tailwind I can beat the record?

The weather station here may beat some records too. The current strongest gust recorded was 62.6 knots on 21st Dec 2013 but it is already recording winds of close to 50 knots – time to batten down the hatches in West Wales once again.