Death of a Monarch

There’s always something with those pesky bees!

Today’s inspection turned into what we though was going to be the performance of an artificial swarm. The first hive we inspected had some queen cells in. All were uncapped but had some well developed larvae in them so there was only one thing to do. The plan was to find the queen, perform an artificial swarm and make two colonies from whence there was one.

We looked and looked but couldn’t find the queen anywhere. We went through each frame twice but still no sign of her. Eventually Anna spotted a small ball of bees on the inside floor of the hive. Closer investigation showed it to be about 6 bees surrounding what turned out to be a very dead queen. We have no idea what had happened to her but she was definitely dead. 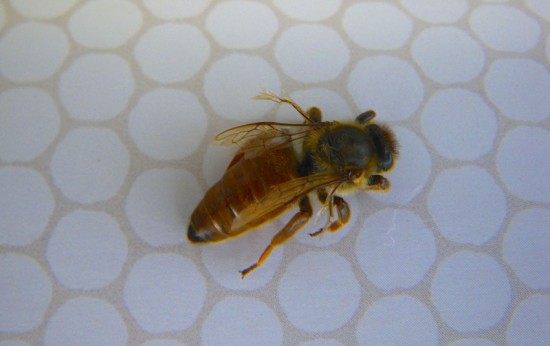 Sad really, but that’s the way of things. We now have to decide whether we leave them to it and hope that they manage to re-queen from one of the queen cells, or if we buy a new mated queen and introduce her into the colony. Each method will have its pros and cons. Leaving them to it is obviously an easy approach and doesn’t cost anything, but it does have a few risks. First it’ll take longer as we will have to wait first for them to seal the queen cells, then for her to hatch. She’ll then have to go on a mating flight and mate before she can start laying. All of which will mean a few weeks before there are any new eggs in the hive. This break in proceedings will obviously hold the colony back a little and mean that they’ll be playing catch up towards the end of the summer.

Buying a new mated queen will speed this process up but will of course cost yet more money, and we haven’t even finished paying for the first one yet!  There’s also the process of collecting, transporting and introducing the queen into the colony that could be fraught with problems in itself.

Maybe we should leave them be for a while just to see how they get on, but with the option of re-queening if it looks as though they need it. Trouble with that approach is we get the worst of both options. We’ll probably end up having to buy a new queen and will have had a break in proceedings within the new hive too.