The final day was upon me and I think I was the only Brit left in town. Everyone else seemed to be Turkish or German and there were very few triathletes left as Alanya recovered from hosting the 2013 European Triathlon Championships.

I had to check-out of the hotel by midday so after the biggest breakfast so far that included far too many calories from fruit juices, cold meats, cheeses, salads, boiled eggs, omlettes, several bowls of muesli, greek yoghurt, toast with jam, apricots and water melon all washed down with several cups of coffee I headed over to the beach for a swim. Nothing too strenuous, just a mile and half along the beach into the cliffs and back. I then had a shower, did some final packing and checked-out. I now had over 8 hours of being homeless in Turkey whilst waiting for my transfer bus to the airport.

I did of course get accosted by a drunk in one of the parks, but he wasn’t too much trouble – It’s the same the world over!

It was the hottest day so far with temperatures up above 40°C so I turned into my parents and strolled very slowly around aware of the fact that I had a long night of travelling ahead of me and no access to a shower. I didn’t want to be the sweaty, smelly person on the bus, plane or train! I stopped off for an apple tea and ice cream and then strolled around the bottom of the promontory where there was a lovely beach and various castle remains to look at.

I then headed back towards the other side of Alanya, buying a few more little presents before strolling, once again very slowly, along the beach. I took a quick dip in the pool to cool off and hoped that I would dry off in time to catch the transfer bus but would feel a little refreshed thanks to the dip in the pool. It didn’t really work though because I started sweating before I had dried and it only took a few minutes to dry off!

I had a late lunch of Pizza Mammamia, followed by another ice-cream and a fresh sesame bagel from a street vendor and then started waiting for the transfer bus. It turned up a little late and then there seemed to be a load of juggling of passengers and luggage from one bus to another. I had to wait for the second bus to turn up and when it did everyone on the first one has to get off and move themselves and their luggage to the second bus. In the meantime I put my bike and luggage and myself into the first bus. No one quite managed to work out the sense behind this, but we all did as we were told! Another couple joined me and then we crossed the road to another hotel where we had yet more of a wait while the drivers tried to fit a couple more bike boxes and their owners into the bus I was on.

We eventually set off for the airport about 45 minutes late, but fortunately made good time, didn’t stop en route, except briefly to swap drivers and arrived with just enough time to check in get through several layers of security checks and board the plane. I was fortunate enough to get a seat near an exit with loads of leg room which was a bonus.

I hadn’t paid for food on the plane though so made do with nut brittle and sesame snaps until we touched down at Birmingham International at 2:30am UK time (4:30am Turkish Time – 24 hours since I got up). So far so good and I now wasn’t far from home. The only trouble was I had to wait until 8:08 for the first train to Aberystwyth. I took the opportunity to buy some food while a shop in the airport was open. I was looking forward to a Whopper from Burger King but it wasn’t open so instead I settled for a large coffee and a banana and pecan breakfast muffin from Costa Coffee and a large tuna baguette from Spar. I polished these off and wandered around looking for somewhere comfortable to settle.

It was now 3:20am and I could do with a snooze but there were very few chairs available. I did find a lovely looking sofa in Cafe Nero where I decided to plonk myself. I thought it would be a little rude to fall asleep on their sofa without buying anything so had another cup of coffee and couldn’t resist a slice of chocolate cheesecake to go with it. 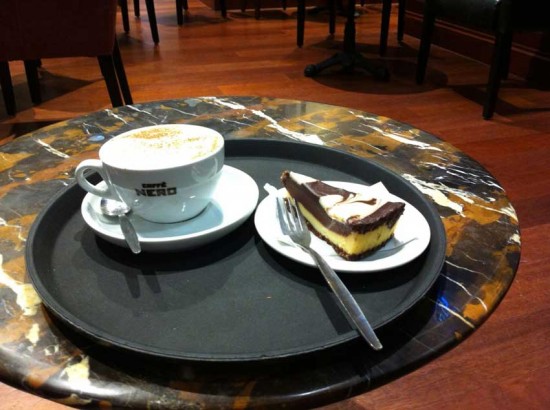 Once they were despatched I attached my bike box and luggage to myself and settled down for a sleep, but all of a sudden at precisely 3:30am the airport got really busy. Where before it was deserted there were now hundreds of people rushing back and forth, constant announcements over the PA system and people coming and going from Cafe Nero. I did my best to snooze amongst the mayhem but failed miserably. I gave up at around 5:30am and went for another wander around the airport only to discover that Burger King was now open. I wasn’t that hungry but I’d been wanting a burger for a while and needed to waste some time so ordered a Whopper Meal and polished that off before waiting for my train that left promptly at 8:08am.

The train kept good time and I arrived back in Borth just after 11am. Anna had left the car outside the station for me so I was soon home and unpacking. I had some lunch, a little snooze and then went off to do the school run – back to life as usual. Anna and Morgan had put up a banner for me on the driveway and everyone was pleased to see me and keen to congratulate me and hear about my adventures in Turkey. There was also a congratulatory cake, plenty of chocolates and of course lots of goodies that I had brought back from Turkey to go around. I even had steak for dinner – I did jump on the scales this morning though and have gone from a pre-race weight of 62.5kg a week ago to a not quite so athletic 68.0kg today – Oh well, it’s good to give your body a break now and then and it’ll be back to training properly and eating better again next week.