I finally made it to Turkey! There was a bit of a delay in Birmingham thanks to a strike by the French air traffic controllers and I was there early anyway so ended up having to wait around for about 7 hours.

The flight was a little cramped but OK and then I had issues getting my bike onto the transfer bus. Why is travelling never straight forward? I checked with Thomas Cook several times and specifically asked if my bike was booked onto the transfer and if the transfer company were aware that I’d have a bike box. Both times I checked I was reassured that all would be OK. However when I got to the stand for ‘Holiday Taxis’, the company I was told to go to, they loaded everyone else’s bike onto a minibus but told me mine wasn’t on their list so they couldn’t take it unless I paid them 80 Turkish Lira (about £30). I’d only brought £200 worth of money with me so couldn’t really afford this but they were adamant.

I went back to the Thomas Cook rep at the airport and she agreed,that my bike had already been paid for and should go on the bus, but that didn’t help. She phoned someone at the ‘duty office’ and I was told that I’d have to pay the fee and then claim it back once back in the UK. I was told that it had been noted on my details and I’d be able to claim it back. Not ideal but it was now 2am in the morning, I’d been travelling since 7am the previous morning and there was nothing else I could do. I reluctantly paid the 80 Lira and got on the bus annoyed.

I was sat next to a young girl but didn’t say a word. She had been talking to everyone in Turkish anyway so I assumed she was Turkish and I’m not on the habit of talking to strangers anyway, especially when in a bad mood at 2am. We stopped for a rest stop halfway through the transfer for a wee and I bought some water and a bar of chocolate. As I got back on the bus she started talking to me. She wasn’t Turkish after all and was actually quite nice to talk to. She was actually Iraqi but had lived in Birmingham for most of her life and visited Turkey and especially Alanya all the time as she loved it so much. I’m not really one for chatting, but I did my best and impressed myself now and then by asking questions about her and making small talk… Mind you she was a hairdresser so I guess making small talk is what she does all day long.

She gave me a few little tips and stories about Alanya, seemed impressed with the triathlon and took my mind off the bike transfer issue for a while. It wasn’t long and we were in Alanya where my bike and I were dropped off at the Miray Hotel.

It was now just gone 4am. I was shown to my room, told that breakfast was from 8am and left to it. I sorted myself out and then opened the card that Morgan and Anna had made and left in my luggage for me… I was suitably impressed and amused by it which cheered me up after a long journey. 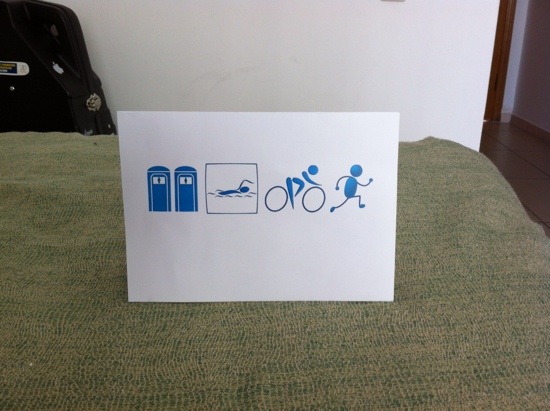 Cool hey, love the portaloos.. They know more about Triathlon than they let on! I sent them a quick message and tried to get some sleep. I hadn’t worked out the air conditioning yet though so had to sleep with the window open which was a little noisy, especially as the ‘call to prayer’ from the minaret towers started at 4:30am!

I gave up on the idea of sleeping after an hour and a half, got up had a shower and built my bike. That didn’t take long so I had to wait around for breakfast where I met up with Andrea and Frank from INTRtri. I’ll leave it there for this post as technically we have been onto day 2 for a while.

Breakfast was like the rest of the hotel, basic but fine. I then met up with a rep which brought up the whole bike transfer fiasco again but he wasn’t any help. Time to forget about it and sort out a refund when back in the UK.