Being a freelance website designer may mean that I have a distinct lack of disposable income – in fact sometimes it means I have a complete lack of income let alone that of a disposable nature – but it does mean that I can work, rest and play to my own schedule rather than being tied to a desk from 9 til 5. I’ve been making the most of this fact over the past few days.

Wednesday was a normal start to the day, up at 6ish and straight to work on the computer for an hour or so whilst waiting for some light so that I could go out for a run. I’m on a ‘medium’ week as far as training volume goes and on base level training as far as intensity is concerned so was just an hour of hilly running around the hills to the south of Borth all at a moderate pace. It was then back home for a shower, some breakfast and some chores. Time to tidy the house, sort out the dishwasher, clean the kitchen and bathrooms, do the laundry, vacuum the house and mop the floors. Next it was back to work for a couple of hours. However, it hadn’t escaped my attention that the sun had made a rare appearance and was shining brightly outside and more importantly, it was bowing a hoolie. Windsurfing has taken a bit of a back seat for me lately thanks to all of my triathlon training, but I couldn’t let a day like this go by without getting out on the sea. So, after a quick lunch of boiled eggs with salad I climbed into my wetsuit, loaded up my wheel-barrow with my windsurfing kit and headed over to the beach. The sun was still shining and the wind blowing at around 35-40 knots so I rigged my 4.5m sail and small wave board and got out on the water. I may not have been out windsurfing much lately but I was sailing well and doing some massive jumps. It was good to be back at it again. I didn’t stay out long though as I had to head back home for a turbo trainer session. So, it was back home for shower number 2, a little bit more work at the computer and then onto the turbo trainer for a hard 1 hour 15 minute session. I was following a TrainerRoad session today and with some fatigue in my legs from the windsurfing it was quite a challenge. Here’s the workout, but I add a little extra warm up and cool down to it. 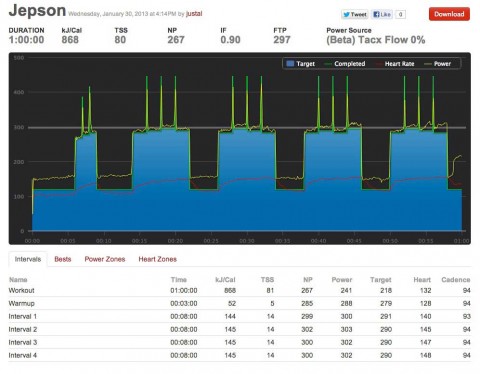 I got through it just in time for Anna and Morgan to come home. So, after shower number 3 it was time to cook dinner and finally sit down and chill for a bit. My hamstrings were pretty tight after the days activities so I spent a bit of time with the foam roller that evening whilst watching David Attenborough’s ‘Africa’ on the TV.

I had a bit of a later start on Thursday but was still at work on the computer by 7am whilst Anna and Morgan got ready for work / school. Once they’d left I did my chores, tidying and cleaning the house, sorting out the laundry and washing up, emptying the compost bins and vacuuming the house. It was then back to work. I actually had quite a bit to do so worked through solidly until lunch time, getting loads done. Lunch was the usual affair, left-over sausages from the night before and salad which was followed by a little bit of foam rolling. My hamstrings were feeling fairly well recovered though. Once again it was sunny and windy so I decided to head out for another windsurf session. Conditions were pretty much the same as the day before so I was out on the same kit and having a good session. Tom joined me on the beach today and took a few photos, but as soon as he got on the water the wind eased off and dropped to next to nothing. I packed up and headed home for a shower and back to work.

Heading out into the fray

Anna and Morgan were a little late home today so I’d headed off towards Machynlleth before they were back ready to get in the pool for a 3.5km swim at 6:15pm. That took just over an hour in what was a nice quiet pool that I had virtually to myself.  After  a quick shower it was time to head upstairs to the gym for an induction and a workout before shower number three of the day and back home for a late dinner. Thankfully there was a nice spinach daal curry that we had made a couple of weeks ago in the freezer so it didn’t take too long to prepare, just a few minutes in the microwave whilst I grilled a couple of naan breads to go with it. There wasn’t much time for relaxing on the sofa tonight though.

And we’re onto Friday already, hooray, the weekend is just around the corner! It’s only 9:30am on Friday as I write this so the day is still young, but it started with some work on the computer and some games on the iPad with Morgan. This was followed by breakfast and some chores once Anna and Morgan had left the house  – cleaning the kitchen, sorting out the laundry and dishwasher, taking out the rubbish.  Then there was time for a little bit more work and some time spent writing this blog. The plans for the rest of the day are to continue with some work for a while, then I have a 90 minute hard turbo trainer session planned, followed immediately by a 40 minute run. Hopefully I’ll get that done and dusted just in time for a late lunch, which may well consist of a Graze Box today – You can get your own free Graze Box with the following code: 5Y8JWZD. Then it’ll be time for a little more work before heading off to do the school run. I have to collect Morgan and his friend today and then bring them home, feed them and get them ready to go to cubs. I’ll be going with them though as I then have to run Scouts and Explorers and will be doing it on my own tonight as Anna is out at the cinema. We’ll probably get home at around 10pm, just in time to get Morgan off to bed and settle down with a drink on the sofa for an hour before heading off to bed ready for the weekend. Who knows what the weekend will bring? Although I do have a rest day training wise on Saturday, but next week is a hard week so I’d better make the most of it. Not a bad few days though and next week looks set to bring more of the same.