It was a sad day in our usually happy household on Friday.

I was getting ready to set of to Rotherham for the Rother Valley Triathlon when Pat noticed that Squeak, one of Morgan’s two guinea pigs was looking a little quiet. I took a look and it was immediately apparent that she wasn’t in a good way. She was very lethargic, her abdomen was distended and her fur was puffed out all over. Her eyes looked a little less bright than usual and she was virtually collapsing on me. There wasn’t anything I could do for her so I bundled her into a box, quickly packed the car with the stuff I’d need for the weekend and took her straight to the vets.

The vets were really nice but said that she needed to stay with them so that they could put her on a warming mat and then give her abdomen a scan. I didn’t think things looked good so arranged for Anna to take Morgan down to see her at the vets as soon as he came out of school. I then set off towards Rotherham hoping that all would be OK but not really feeling too optimistic about the outcome. I warned Anna to prepare Morgan for the worst.

Thankfully she was still alive when Morgan went to see her, but he had a friend with him so didn’t really make much of the visit. Sadly she died later that evening. We were all a little upset and felt for Morgan too who was distraught for a time. Anna collected her from the vets on Saturday morning and they buried her in the garden under the oak tree later in the day. She was only a couple of years old and seemed to have died due to some form of digestive disfunction. Apparently such things are fairly common with guinea pigs.

Morgan still mentions it a bit now and then but seems to be coming to terms with it quite well. Bo, the remaining guinea pig is now on her own which is a little sad but she has been getting plenty of attention in the past few days. 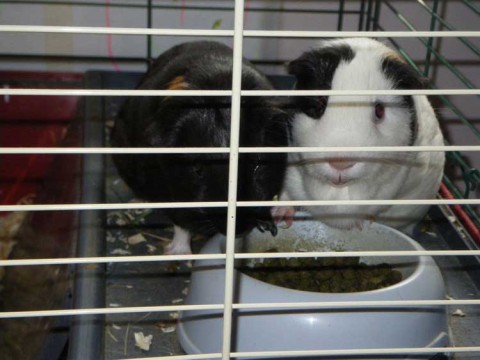