If you don’t know by now, you should, but I’ve qualified for the ITU Age-Group World Triathlon Championships that take place next month in Auckland, New Zealand. It’s going to be a trip of a lifetime, but getting ourselves there in order to compete isn’t going to be cheap so I’ve been looking for potential sponsors. It isn’t just the cost of competing, flights and accomodation to think about, I’ve also got to get my bike out there and a decent hard shell bike box costs in the region of £450.

A friend Jon was going to let me borrow his Bike Box Alan. These are British made bike boxes that are generally considered to be the best in the business. Sturdy, Strong and well designed for the rigours of international bike transport. They are a little heavier than a softer bike box but not as heavy as some of the other hard shell cases that are out there. Unfortunately Jon was going to be away at the same time as us and needed the box himself so borroowing his was no longer an option.

Another Friend Dan stepped in to the rescue and let me borrow a lighter weight case that he uses. It wasn’t quite the same as the Bike Box Alan though and I wasn’t completely comfortable trusting my bike to its less than adequate protection. There was nothing for it, I was going to have to invest in a bike box myself, especially seeing as I was also hoping to qualify for the European Championships next year so might be transporting my bike around the world more than just once.

Bike Box Alan just so happen to be based in Rotherham, just a mile or so from the Premier Inn that I had booked into last weekend ready for the European Qualification race at the Rother Valley Triathlon. So I made a quick phone call to them and came to a deal where they’d have a brand new box ready and waiting for me to collect on the Saturday before the race. Perfect, I’d be there anyway and collecting it would save me some money in the process. I did have a chat about potential sponsorship as well, but that may have to wait for another year.

I arrived on Saturday morning to collect my new box, but Alan couldn’t find it. It wasn’t on the van, it wasn’t in the workshop, it wasn’t around the back of the workshop – How could such a thing disappear. He said he could remember seeing it as it had a Welsh Flag on it, but it was nowhere to be seen. In the end he realised that it must have been sent to me with the courier on Friday afternoon so he checked some paperwork and sure enough it had already been despatched. That didn’t really make much difference to me as it would arrive on Monday and it would save me carting it around for the weekend so I settled up with him and was looking forward to it arriving on Monday.

Sure enough, first thing on Monday morning a courier arrived with the bike box so I’m now the proud owner of a no holds bared, best in the business, Bike Box Alan. It is even personalised with my name. I’ve just got to practise packing my bike into it now and will have to check the weight of it once it is fully loaded. It is certainly much better than the softer case I had borrowed from Dan and should provide my bike with the protection it deserves. 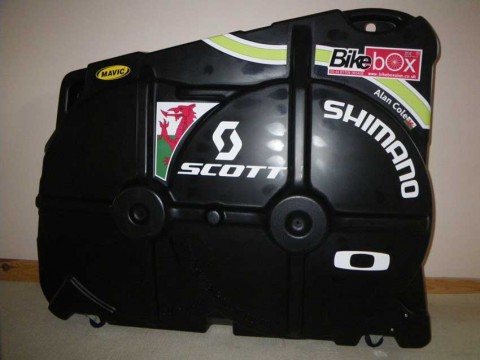