The last time I ran along the coast path from Borth was the day I tore some ligaments in my ankle back in July. Since then I’ve been a little wary of running along it so have stuck to slightly more even routes and haven’t ventured onto the coast path. My ankle is still sore from the injury and even now, 6 months later still hurts every evening so I haven’t wanted to aggravate it even more.

I decided to ‘man up’ today though and head out for my run that takes me from Borth, up along the coast path to the War Memorial, down into Aberwennol and then along the steep ups and downs of the coast path to Wallog. As I started on the Coast Path I noticed a new sign “Warning – Cliffs Kill” – just what I needed to see! I then head inland and back along the coast road to Borth. I managed it without incident, although I did slip over once and it was very wet and muddy out there. The climbs and descents on the coast path were difficult as they were so slippery so at times it become more of a totter than a run, but I survived.

I think I’ll leave it again for a while though as it is definitely a route better suited to the summer. My time was really slow, a whole 7 minutes slower than usual. I’m hoping some of that was down to the conditions, but I’m sure the mince pies over Christmas haven’t helped either. 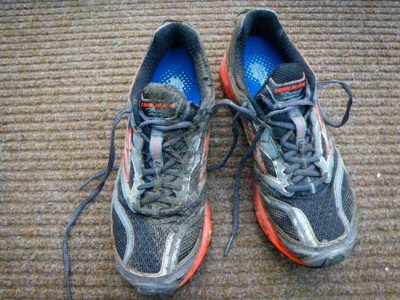