Just over a week had passed since our first hive inspection and after our walk at Ynyshir, the sun came out, the wind eased a little so we had a perfect window of opportunity to make our second hive inspection.

We were hoping to find that the bees had built out comb on a few more frames and that we’d have to add a super to the hives to give them more storage room. Unfortunately this wasn’t the case. The first hive, ‘Clettwr’ was in pretty much the same state as the week before. Plenty of bees, lots of honey stores, plenty of eggs and all stages of larvae were present. There were a couple of bees with slightly deformed wings which can be a sign of varroa infestation so we’ll do a varroa drop count soon. Other than this, we saw the queen and all looked well but there was little change from last week. I suppose the weather hasn’t been great for them though. I’m also puzzled as to where all the pollen that we see them taking into the hive has gone. There seems to be very little stored in the frames.

The second hive, ‘Leri’ had us even more puzzled. Yet again, no real change from last week as far as the number of bees or the amount of stores go and we soon spotted the queen who looked happy. However, we also saw some queen cells on a number of frames. These are often a sign of imminent swarming, in which case something needs to be done. However, we couldn’t really see why they would be thinking of swarming and our gut feeling (for what it is worth coming from a couple of newbies with no experience) was that this wasn’t the case.

A couple of the queen cells definitely had larvae in them and a couple of them looked as though they were already sealed. This wasn’t good news and it seemed as though things were happening quicker than they should be. They definitely weren’t there last week though and it takes 8 days for a queen cell to be sealed after the egg is layed in it. I guess there was just enough time for the bees to have created a queen cell, the queen to have layed an egg in it, for the larva to hatch and developed enough for them to seal the cell, but only just and it would have been pushing it. It hadn’t even been a full 8 days – not quite anyway.

If swarming is going to happen then it will occur at around the same time as the first queen cell is sealed. If what we were looking at was indeed a sesled queen cell then swarming could happen at any minute – literally!. Did we need to intervene? What should we do? It was time to assess the situation and decide whether we need to intervene.

The queen was present so they hadn’t swarmed so that was one thing.

Swarm Cells are the ones that indicate that the bees are about to swarm, they hang vertically from the bottom of frames. Swarming is usually brought on by a lack of room in the hive which certainly wasn’t the case here, but can also be prompted by lack of suitable forage in the area and other reasons that probably only the bees know.It is generally accepted that you don’t want your bees to swarm (in an uncontrolled fashion) if you want to prevent losing bees, losing your potential honey crop and ending up with a queenless colony.

Like swarm cells, these are entirely vertical but are usually located on the face of the comb. The reason bees create these is to replace the existing queen who they have decided is not up to the job. She may be old, she may be damaged and probably a host of other things of which again only the bees know.

Emergency Cells are produced in response to the sudden loss of the queen. The are formed from normal horizontal cells in the frame – a cell containing an egg and are modified to allow the development of a queen. The cell is therefore part horizontal and part vertical with a right-angle bend in the middle.

So, what did we have? 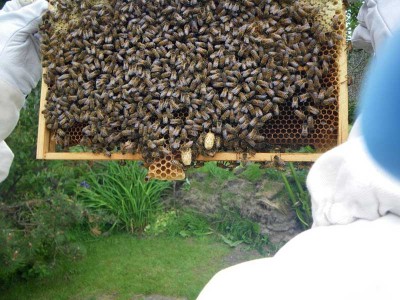 These weren’t emergency cells as the queen was still present and they look vertical. They were also at the bottom of the frames, although some of them weren’t completely at the bottom. Many people just destroy queen cells as soon as they see them, but that wasn’t our approach. We don’t want the bees to swarm, but if these are supersedure cells then we should just let them get on with it and replace the queen. Afterall, the bees know best, and maybe there is a problem with the queen.

So, we’ve left them as they are at the moment, but will be seeking some more expert advice ASAP – Only two weeks into our beekeeping careers and already we have a situation! I’ll keep you updated on the outcome.