Another Nuc of Bees

Our second Nuc of bees arrived on Saturday evening. This time Jim brought them around and transferred them for us before it got dark. He did exactly the same as we did though so it looks as though we got it right first time.

We now have two hives in the garden with a new colony in each. We’ve called them ‘Clettwr’ and ‘Leri’ for identification purposes. After transferring the nucs into the hives we fed them both with a litre of sugar syrup and will now leave them alone until next weekend when we’ll do our first proper inspection. The plan is to look for, and maybe even mark, the queen in both colonies and to see if they have drawn out the comb on any of the new frames.

Despite the incessant winds there has been some activity within the hives with a few bees coming and going from both of them. 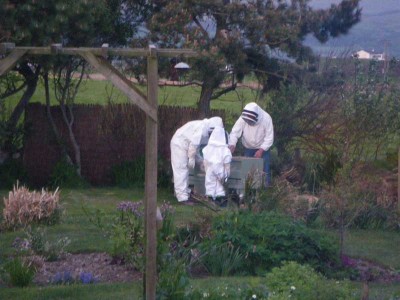 Transferring the nuc to the hive