The barge that is carrying 21,000 tonnes of rock for the Borth Sea Defences is still moored about 5km offshore from Borth. We can see it on the horizon. There is a also smaller barge with it that will be ferrying in loads of rock at each high-tide (wind and waves permitting) and dropping them off on the beach ready for use in the construction of the sea defences. It may seem like a lot of trouble to go to but it cuts down on some 7,000 lorry loads trundling along the twisty Welsh roads to Borth. 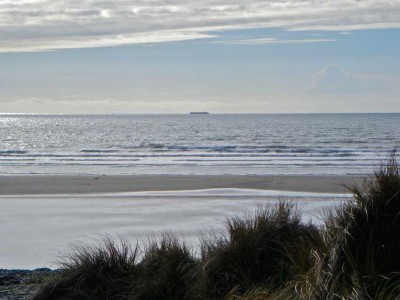 Of course, wind and waves have hampered the offloading of the rock cargo over the past few days so the new schedule (weather permitting) as as follows:

The smaller barge â€œCharlie Rockâ€ will be loaded on Wednesday 6th April and she will the deliver rock to the beach between 08:45am – 11:45am on Thursday 7th April.

The second shipment of Norwegian Rock is also on its way to Borth and is currently in the English Channel being towed by Tug “Tryton”.