I’ve just got back from a nice morning windsurf. Nothing too spectacular as my 4.5m sail and little board wasn’t quite big enough so I took some rinsings in the lulls and had one pretty big swim too. On one occasion I had a monster wipeout got rinsed around for a while, held under for ages and then finally had a big swim back to my board. I made it back in one piece though.

Once back at home I noticed that the wind had dislodged the temporary phone line that BT have put in for us. Following our phone line woes a few weeks ago, we finally got a second engineer out who discovered that the fault was in the line under our garden so they are going to come back and dig that up one day. In the meantime we have a temporary line draped across the garden so that I can at least use the phone and internet. Well, the wind had dislodged that so I joined it all back together as best I could without really knowing what I was doing. There were quite a few little cables disconnected but I just left them, stuffed it back into the little box and hoped for the best.

I’ve since tested the phone and it seems OK, and I’ve now just run an internet speedtest and have got the fastest connection we’ve ever had here. Usually we get download speeds around 1200kbps and on a good day maybe as much as 1400kbps. Todays test (and I’ve now run a few) are showing speeds at around 2400kbps – Twice as much as we usually get. Maybe I should become a telecommunications technician because whatever I’ve done has doubled our internet speeds and seems to have done a much better job the the BT engineers do. 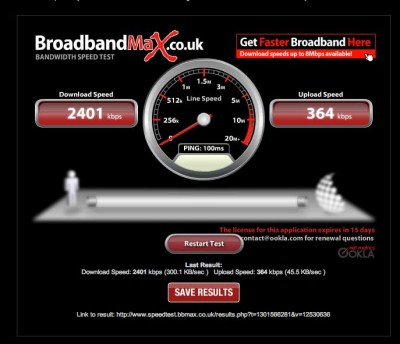