Geocaching in Llandre and Bow Street

Morgan and I had a pleasant walk on Sunday morning and found a few geocaches too. It was a fairly cold, grey day but nice enough for an easy walk behind Bow Street. We started off doing a series of caches called ‘Borrick Blunder’ and listed as a geokid circular walk. Hidden by ‘nitroglysarine‘ they sounded like a perfect series of caches to do with Morgan. the story goes:

“Help Borick find all his missing tools of war. Little hands and fingers will help find Boricks missing; Greave, Vambrace, Helm, Chest plate and Sword. But be quick he needs to get to battle.

Normally Borick is a warrior fighting to defend the shoreline from invasions, but he is rather partial to the odd victory tipple!

The route Borick took on his victory run last time he was in battle unfortunately took him past a nearby tavern, he had a few to many flagons of meed, and got a bit crazy on his walk home, and lost some of his tools of war.

You can help him find them and reunite his with them. The walk is circular, and can be done from either end of Bow Street, and will loop around to the other end. The walk is buggy friendly the whole way, but there is no pavement. Although it is a VERY quiet road. The whole walk is circular and is approximately 2 miles in total, with conveniences at beginning and end.”

We started at number 5 and worked our way around in a clockwise direction. Number 5 was fairly easy to find although we hadn’t yet got our geocaching eyes in so it took a minute or two to find. Number 4 was a little more tricky but we got there in the end with a bit of teamwork. 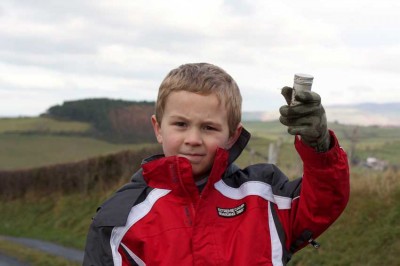 Morgan with the cache

Our route then took us up to the top of the hill where there wer some nice views up to the wind-farm and down through the valley to Clarach.

Number 3 was a quick easy find. 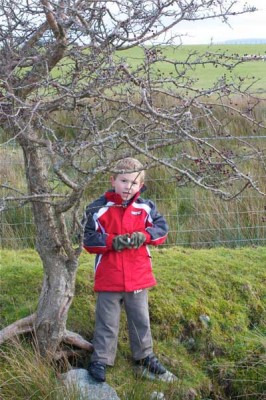 Number 2 in the series was the most difficult to find. The co-ordinates were spot on but it took us a while to find the container. We got there in the end and that was 4 out of 4. Off to Number 1 which was actually the easiest of them all. A good series and a nice little walk on quiet roads.

Spurred on by our success and as we were passing it on the way back to the car we decided to attempt another cache called Epsilon, also hidden by nitroglysarine in Bow Street. The description said

“This is part of the more challenging cache finds I’ve put out.”

and there were quite a few DNF’s (Did not finds) in the logs so I wasn’t that hopeful but it turned out to be the easiest of the day so far. We got to the coordinates and had the cache within a couple of seconds. I wasn’t expecting that.

We then walked back to the car and drove to Llandre where we stopped for a ply in the playground and found another cache. This time it was one of the Alphabet Series – D. Another nice easy find – We were on a roll.

We then took a walk up the hill behind Llandre for our final cache of the day. Another one of the Alphabet Series – K. In this one we swapped a few trinkets and collected a travel bug too. Then it was back down the hill, another quick play in the playground before heading home for a well earned lunch!

A good series of caches that as usual took us to places we hadn’t been before, kept us occupied on a nice little walk and allowed Morgan and I to spend some time together.