Don’t worry, I’m not about to buy another bike!! I’m trying to decide what bike to use in a Quadrathlon tomorrow. It’s a fairly flat, grassy off-road course that should be ideal for a CX bike. I used my CX bike last year and it was fine. However, I’ve got a nice race oriented MTB with me as well this year and in CX races last year I tended to be faster on that. 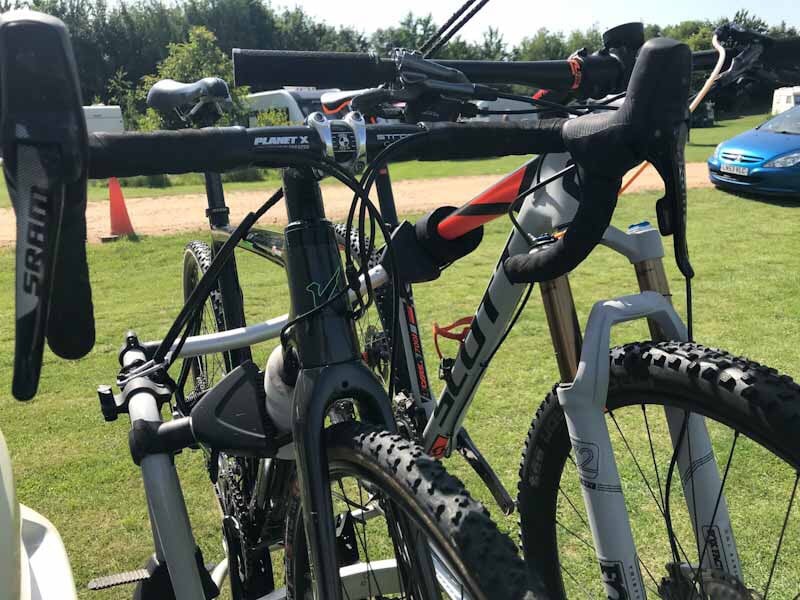 Side by Side Tests

As usual, I arrived at the race venue early on Saturday so as to make a weekend of it and recce the course. As the bike course is three laps that gave me a chance to test the two bikes side by side. Or more accurately back to back. It wasn’t the most scientific of tests. All I did was ride around the course at a steady pace on my CX bike keeping my heart rate at around 125-130bpm for the most part and noted the time it took. I then did exactly the same on my MTB.

As I was doing it I realised that I was secretly hoping the MTB would be faster. Here’s the data:

That seemed fairly conclusive. The effort levels were nearly identical, if anything the MTB was slightly easier but it was almost a minute faster. As I had secretly hoped the MTB was quicker it was decision made.

I then decided to do a fast lap on the MTB just to get a feel for it at close to race pace.

It was certainly harder with an average heart rate of around 145bpm but it didn’t feel as fast as I had hoped. I didn’t go flat out all the way and did ease off completely towards the end so I can’t be sure how long a proper fast lap will take me but it was around 15 minutes which was a lot slower than any of my laps last year. Maybe the CX bike would be better after all?

The problem I think is that at pace the extra drag from the wide ‘grabby’ MTB tyres means that it reaches its top end at a much lower speed than the CX bike. It does have the advantage of smoothing out the bumps and has better control in the corners but on the straights I don’t think it has the sheer speed of a CX bike when ridden at pace.

What I should have done was a full fast lap on both of them to compare as the easy lap hadn’t really shown me anything relevant. I could have swapped bikes gone around again but with the temperature at 33°C and a race tomorrow I didn’t want to do too much.

So, despite my testing, I still don’t know which bike will be best. I think, based on the fact that I secretly wanted the MTB to be faster, that maybe I should use the MTB regardless of any performance advantages or disadvantages. I know that it probably isn’t actually the fastest option at race pace but I must have subconsciously wanted to use it so I may as well.

It probably won’t make a huge amount of difference. Given the fact that Michael will be racing tomorrow it won’t really matter anyway as he’ll overtake me on the kayak and that’ll be the last I see of him until the end regardless of which bike I do or don’t use.