Another good Cyclocross Race, and this time I’m pleased to say that rather than saying my race report comes from somewhere in the middle of the pack, it’s actually coming from a little closer to the pointy end. Still not at the pointy end of course – far from it in fact, but it was my first ever top 10 finish so I’m pleased with that.

I made a last minute decision on Sunday Evening to stay over after the race on Sunday so that I could continue my run around Wales. The last stage of Offa’s Dyke was calling from Monmouth to Chepstow. Not that close to Swansea, but closer than driving all the way home and then all the back down later in the week. So, plans were made and the van packed ready for a couple of days of activities. I then set off first thing on Sunday morning and drove through the pouring rain to Swansea. The rain eased off as I got there, but there was a heavy shower as I pulled up into the SIngleton Hospital Staff Car Park. I therefore sat in the van for a while, waiting for the rain to stop before heading over to race HQ to sign on. 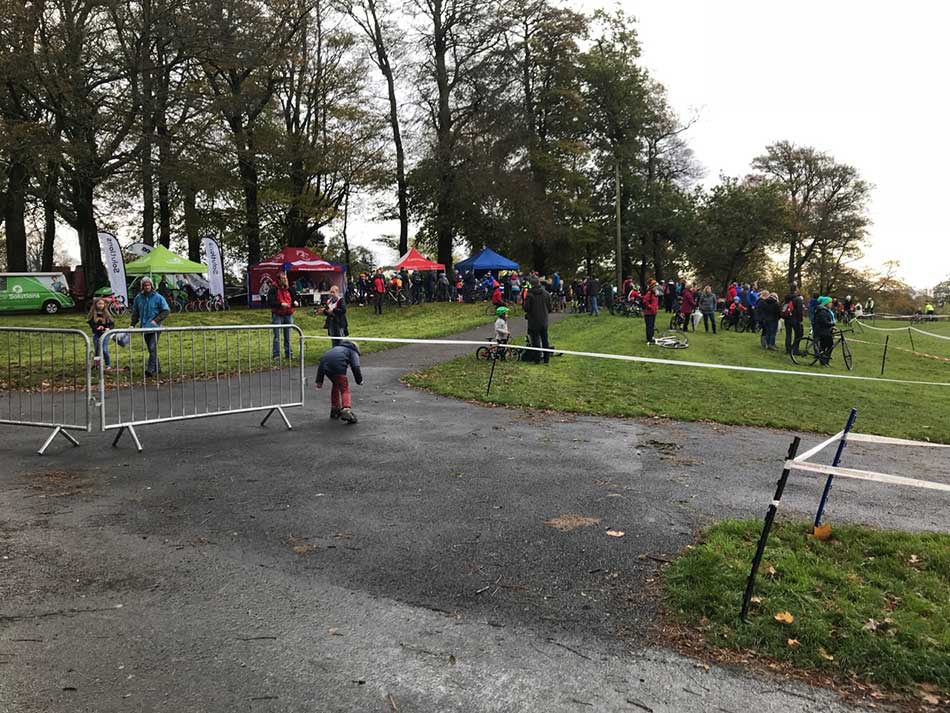 The course was marked out and looking good and there was the usual hive of activity. I signed on then headed back to the van to get ready. It was now that I realised that in my haste to pack running as well as cycling kit the night before that I’d forgotten to top up any of the water bottles in the van. That meant I had nothing to drink during the warm up and race preparation, and nothing for afterwards either. There wasn’t anything I could do about it though, so I got changed and rode over with both my bikes to the race area. I was even brave enough (as there was no one watching) to ride over on my MTB whilst pushing my Cyclocross bike besides me. It saved a walk if nothing else and more importantly made me look like a pro!

It was then time for the usual chat to people I know and some course recce. We couldn’t ride much of the course yet but there was a chance to ride the far end where there were some slippery grassy turns up, down and around a grassy bank, and a tricky little ditch through some trees. 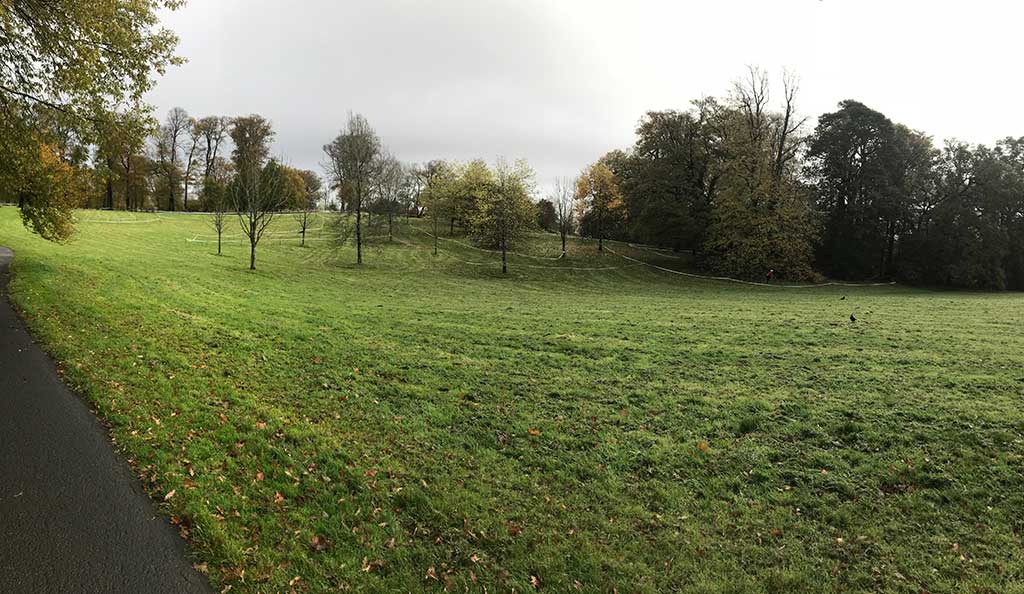 Far end of the Course

I was able to ride the ditch – just. I made it cleanly a couple of times, had to put a foot down just at the top once or twice and didn’t make it at all once or twice as well. I decided there and then to dismount and run this bit. Making it whilst practising was one thing, doing it with loads of other people around in the heat of battle was another. The safest thing to do was to dismount.

Once the Youth Races were finished it was time for a couple of laps practise before our race. The first lap would be a short lap a straight to start with and then into some grassy twists and turns before heading onto the tarmac start/finish straight for the first full lap. After the straight it was a 180º turn onto some grass and then over a little ramp into some trees. A couple of slippery muddy turns took us past the pits and then into some 180º switchbacks as we tracked back and forth across the grass. A slightly rooty turn around a tree, a couple more switchbacks and then a grassy straight and descent into the far end of the course. Here we were presented with more turns. Some up and down a slippery bank, others back and forth across it and then down into a little wooded area and through the aforementioned ditch.

Next there were some turns and short climbs around various trees, a little rooty section around another tree and then past the other side of the pits and into a very slippery off-camber downhill muddy bend. Care was needed here. Next was a series of switchbacks up and down a very muddy bank. These were far too muddy to ride so it was a definite dismount and run with the bike, up, down, up, down and up the bank again before remounting and heading off into some sweeping grassy turns with a few 180º switchbacks for good measure. From here it was a simple matter of a couple of hurdles another couple of turns and then onto the start finish straight to finish the lap.

It was going to be tough but it was a good varied course with lots of features. I had decided before I got there that I would probably use my Mountain Bike for a change. The fact that I had a sore shoulder from the previous days windsurfing helped to cement this decision, so that’s what I did.

With a couple of laps practise under our belts it was time to line up for the start. I was seeded on the 4th row in about 20th place with Stafford to my left. Will was quite a way up towards the front having and a good season so far. There were plenty of other familiar faces around as well, but no sign of Richie or Ant this week. There seemed to be lots of people there though with a big field of people lined up behind us.

The whistle blew and we were off. I got held up a little immediately off the line but soon found a gap and put the power down. I hadn’t lost any places off the line and soon started gaining a few as I weaved my way through people in front of me. I attacked further on the grassy turns of the short first lap, diving for the inside of the tight uphill turns but taking the longer outside line on the downhill turns so as to maintain momentum. I was more assertive than usual as well, fighting for my position rather than apologising to people and getting out of their way! It seemed to work. I did get a little tangled up with someone on one of the bends but we managed to avoid crashing and continued on our way.

On the tarmac straight I was overtaken by Richard Morgan from Cardiff Ajax CC, the wide tyres, wide bars and more upright position of the mountain bike was a disadvantage here but it felt good elsewhere. I tucked in behind him and could see Will a place or two ahead.

Over the little ramp into the woods I decided to get some air just for fun. I was on my mountain bike after all and I just couldn’t resist it. I did a little jump here on every lap after that. Richard and I then ended up trading places at various points for a few laps. We overtook a few others and I could see that I was gradually catching Will too. I overtook him halfway through the race and continued to push hard. I couldn’t shake Richard though. At one point he was ahead and opened up a bit of gap. I caught him back up though and on we went, trading places and having a hard fought race. We were soon overtaking back-markers and were getting passed by a couple of the fastest V50’s.

As I passed the start finish line to see the 2 laps to go sign I put in a bit of a spurt, caught Richard and then overtook him after the first turn, did a little jump off the ramp. I then pushed hard to open out a gap. Finally my effort paid off. He seemed to be fading and I was feeling good, I kept pushing hard and opened out a slightly larger gap. He wasn’t on my tail as I took the bell, so with one lap to go and still plenty in the tank it was time for one final effort. There was no one around towards the end of the final lap. No carrot in front of me to chase and no stick in the form of Richard behind me so I was able to ease up a little and play it safe through the final few turns to cross the line.

There was the usual after race banter and then it was time to pack up and head off to my parents house in South Gloucestershire for the evening so that I could run the last part of Offa’s Dyke in the morning. The drive was through torrential rain all the way along the motorway – not nice, but at least it stayed dry for the race.

As I alluded to earlier in the post, it was a great result for me. The likes of Will and Richard who I ended up racing against usually finish quite a way ahead of me. They are often close to top 10 while I’ve been finishing in the low 20’s most of the time this year. The last time I was racing against the likes of them was at Hereford. Coincidentally (or maybe not), that was also the only other race that I’ve used my mountain bike rather than my Cyclocross bike.

The larger tyres, wider bars and suspension obviously help with handling somewhat when using a mountain bike, even if I did have the suspension locked out. That isn’t always the case of course as cyclocross bikes are better in certain respects. In muddy conditions I feel as though the narrower tyres of a CX bike can actually dig in and get more grip. Maybe however the lack of skill on my part is masked somewhat when using a mountain bike and that extra bit of confidence is just what I need. It could also be the fact that my CX bike is a relatively cheap one. When I bought it I’d never done cyclocross and didn’t know if I’d get into it. I was therefore sensible and didn’t buy a top of the range bike. My mountain bike is just better quality all round. It’s lighter, it’s stiffer, it’s more responsive and it has better components. It’s just a better bike so maybe that’s what helps.

Whatever it is, that’s two races now where I’ve used my mountain bike and two races where I’ve been racing with people who are usually quite a way ahead of me. Whether it’s the increased confidence from a mountain bike, better handling or the better quality bike, it certainly seems to work. Not only was I racing further up the field but I got my first ever top 10 placing, finishing in 9th place. Result! 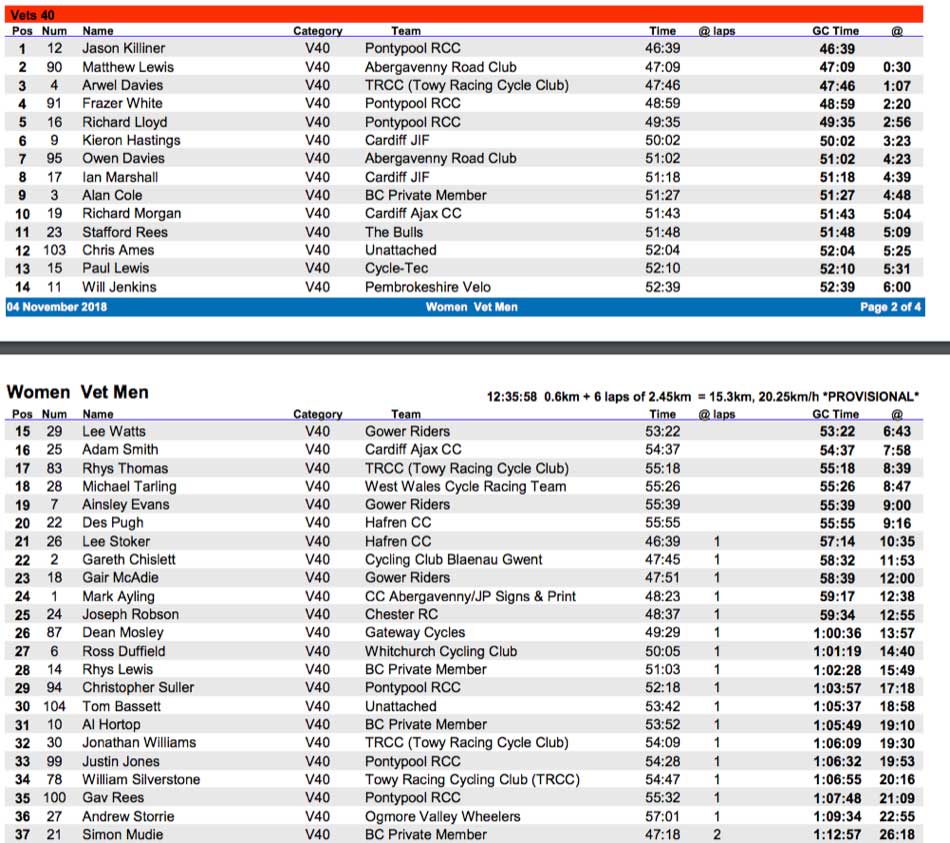 Anna of course see’s the fact that it appears that I’m better on my mountain bike to mean that I don’t need a CX bike and could therefore sell it. She’s not a cyclist though so what does she know? I am a cyclist and of course see things a little differently. It’s clear that I do better on my MTB because it’s a much better bike. That therefore means I need a much better cyclocross bike as well.

All in all a great race, a great course, good organisation, good friendly hard fought competition and a good result for me.