It’s been ages since I’ve been able to continue with my circumnavigation of Wales. The last run along Offa’s Dyke was back in April when I ran from Hay-on-Wye to Pandy,. across the Black Mountains. I had an achilles injury after that run so was out of action for a while and missed the first race of the Quadrathlon season because of it. I then took it easy on the running front so that I could at least compete in the other Quadrathlon races of the year. What with races, family holidays and a verruca from hell, running long distances as part of my plan to run around Wales was out of the question. After that, there were races almost every weekend and then Cyclocross season started. I do have a few days off mid week between now and Christmas though. I thought that I may as well make the most of this holiday and continue with my project to run around Wales. Wednesday was one of these days so plans were made.

Part of the problem was that the next stage of the journey was a 17 mile run from Pandy to Monmouth. That’s quite a long run without any build up so not something I wanted to just throw myself into. There were no options to cut it short or split it up either, so I had to commit to the whole distance. The weather looked perfect for Wednesday, I didn’t have any big races planned and didn’t even have a cyclocross race this weekend so there were no excuses.

I set off early on Wednesday morning bound for Monmouth. It was a slow drive through an autumnal Wales as the sun rose from behind the mountains. 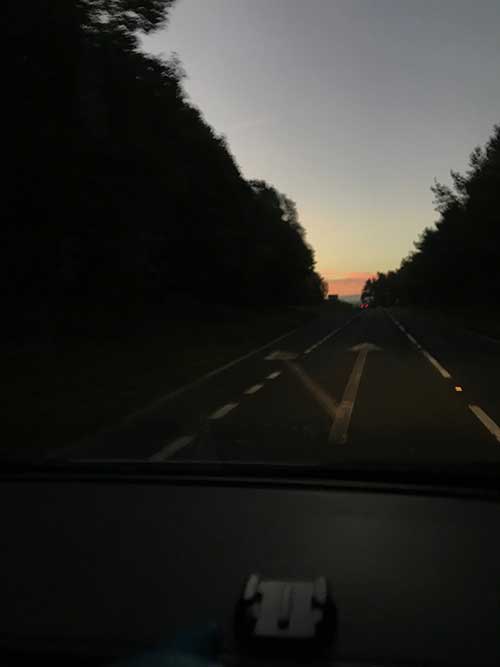 The skies were clear as the light gradually crept into the sky and the trees glowed bright orange in the early morning sunlight. 2½ hours later I arrived in Monmouth, found a quiet street to park up in and headed to the bus station.

Today’s adventure on the buses was to be a couple of hours from Monmouth to Hereford and then from Hereford to Pandy. All went smoothly. The buses were on time, I found the right stops and found myself in Pandy by 11:30. Five hours after leaving home it was finally time to start running. As I got off the warm bus into the outside world it suddenly felt a little cold around my nether regions. I looked down and it looked as though I’d wet myself. Don’t worry, I hadn’t. What I hadn’t noticed in the warmth of the bus was that my camelbak bladder that was on my lap had been leaking.

I was now stood here with soaking wet shorts and worse still, no water for the 17 mile run ahead of me. Not only that but it was now 6 hours since I’d eaten anything, I was feeling quite hungry and didn’t really have anything with me other than a single energy bar. I decided to save that for later, decided there was little I could do about the wet shorts and lack of water so headed off onto the trail. At least the signpost for the Offa’s Dyke Trail was right by the bus stop. 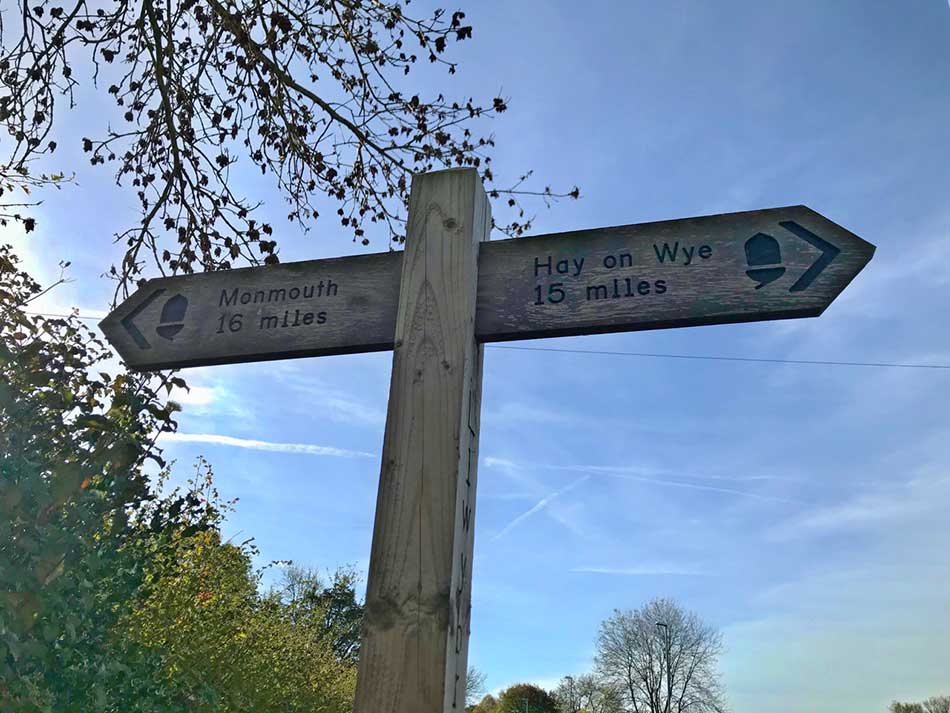 I jogged off, through a gate and was soon heading up through a grassy field. There were no clouds in the sky, no people, no deadlines and no worries – this is what it’s all about – if you ignore the damp pants and lack of sustenance for the journey ahead that is. I was heading into the rolling hills of Monmouthshire where apple orchards abound. My shorts would soon dry in the sunshine and I did think that maybe I’d find an apple or two to keep me going. There was little between me and Monmouth other than fields, hills and the occasional farm building. There were no facilities, no shops and nowhere to top up my water.

In fact, there was very little of note throughout the trail. Most of the run was through a never-ending patchwork of fields. Gates at either end of these would provide a brief pause from the steady jog. Other than that there is very little to say about the run really. Don’t get me wrong, it was far from boring and was through some lovely countryside, but there was little in the way of features.

As I climbed out of Pandy I left the Black Mountains behind me.

Looking back at the Black Mountains

The distinctive shape of Skirrid could be seen off to my right.

Legend has it that half of this hill was pulverised caused by an earthquake or lightning strike at the moment Christ was crucified. From this vantage point it was easy to see the chunk out of the side of the hill. A more scientific explanation is that there was a huge landslide during the thaw following the last Ice Age. I tend to go with the latter explanation. The name ‘Skirrid’ is derived from the Welsh ‘Ysgyryd’, which means to shake or tremble, and the hill is still prone to small landslides today.

Occasionally the never ending tromp through gated fields would be punctuated by a run alongside or through a small woodland. Squirrels scampered as I approached and the autumn leaves crunched under my feet. It was getting quite warm by now so I soon took off some layers and ended up in just skimpy (damp) shorts and a thin running ‘T’-shirt for the whole day. Yes, this is October in Wales. I was thinking that maybe I should have slopped on some suncream and slapped on a cap. Hopefully the sun wasn’t too strong though and the fact that it didn’t rise too high in the sky gave away the fact that it was autumn, not mid summer.

The trail took me along a few minor roads here and there but most of the time was though fields or woodlands.The thick leaf litter in the woods kept me aware of my footing at all times as roots and rocks weren’t easily seen. The fields were pock-marked with hoof prints too so never was the going easy. Cows blocked my way from time to time and seemed reluctant to move. I had to push one out of the way at one point and she just stood there staring at me with a confused expression on her face.

Little bridges took me over drainage ditches and the occasional larger stream. From time to time I ran alongside or through farmyards. For a time the grazed fields became an arable landscape as I made my way through fields of corn stubble, fields of potatoes, fields of sugar beet and turnips and then fields full of newly sprouted corn seedlings. There were a few missed turns here and there and some fields with barely discernible ways through them. Usually paths go around the edge of fields but many of these arable fields had narrow tracks right through the middle of the crops. 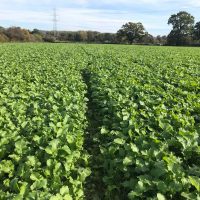 Path through the crops 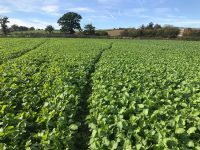 White Castle was a break from this. I could see the remains of it’s ramparts as I ran across fields towards it. 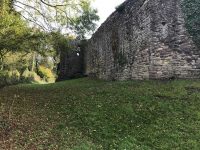 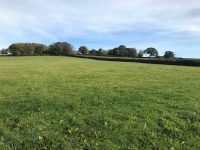 White Castle is the best preserved of the Three Castles, namely, White, Skenfrith and Grosmont. The Three Castles are usually grouped together because for a large part of their history they were part of a block of territory under the control of a single lord, Hubert de Burgh. The heart of the castle is surrounded by powerful round towers. The trail took me right around it’s sides, but there was no way in to take a closer look.

There were occasional churches too. 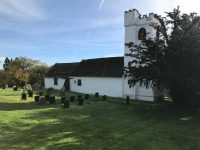 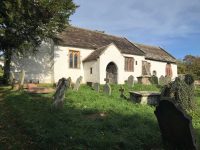 From White Castle, it was a steady descent for a while and then a never ending jog through yet more farmland. At one point, the trail turned off through a Bulmers Apple Orchard where thousands of Apples lay on the floor beneath row upon row of neat apple trees. There were several varieties. Having made it this far with just a single energy bar and little water it would have been silly not to do a little scrumping. 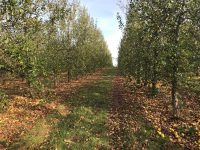 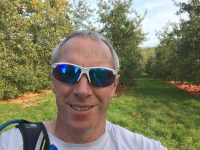 More fields, more stream crossings, more farmyards and then a bit of a climb into a forestry commission forest. 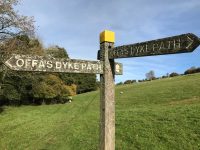 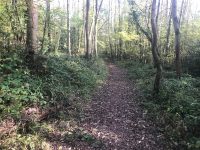 From here it was steep wooded descent down towards Monmouth. A run around the edges of a few more fields with hard packed red soil that made the going easy. I then soon emerged into the suburbs of Monmouth where large, presumably very expensive, houses lined my way. I was making good pace along here. Through housing estates and then out into the town. I crossed the River Monnow over the impressive fortified Monnow Bridge. 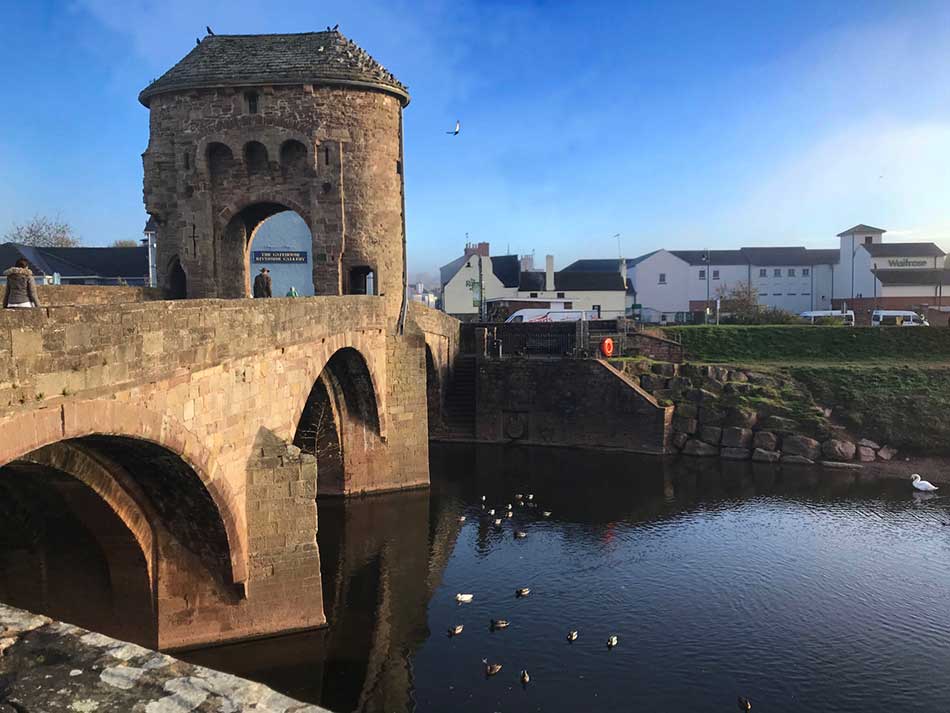 This is the only remaining medieval fortified river bridge in the UK. From here it was a short jog to the bus station so that I had a sensible starting point for my next stage of the journey.

I popped into Waitrose for some chocolate milk and scotch eggs and then retraced my steps over the Monnow Bridge and back through the housing estates to my van. All that lay ahead now was a 2½ hour drive back home. That’s 7½ hours of travelling for a run that took a little over 3 hours. It’s not going to get any easier on the logistics front either as I complete the SE corner of Wales. Just one, maybe two more runs to complete Offa’s Dyke and then it’s back to the Coast Path.