I had to do the next section of my Offa’s Dyke run on Sunday this week. The public transport links between Knighton and Montgomery weren’t great so I had to call on Anna to act as my support vehicle. This meant doing it at the weekend rather than on a Monday. Not a problem, as long as Anna has somewhere warm to go while waiting for me. Luckily todays run would finish at the Offa’s Dyke Centre in Knighton, which was not only open from 10am-3pm on Sunday but also had a cafÃ© serving hot drinks and cake. Anna was hopefully going to be well catered for whilst waiting for me to make my way to her.

My Garmin Fenix 3 had decided to stop working the day before. It just woouldn’t turn on and had no life to it. I’ll see if Garmin can fix it but it’s out of warranty so it may mean I need to buy a new one. The Fenix 5x Sapphire looks lovely and the mapping feature would have been good today but it’s out of my price range at just over £600. I do use it everyday but that’s just too much for a watch for me. If my Fenix 3 can’t be fixed then a direct replacement might me in order. It’s been the perfect watch, but it’s a shame it didn’t last more than 3 years. Luckily I’d yet to get around to selling my Garmin 910XT which had been in the cupboard for the last 3 years. I fired it up, it still had 65% battery charge and seemed to be working well.

With plans made, rendezvous points set and tech sorted we were ready to go. I wasn’t sure if my legs were ready to go though after a fairly hard week of training and a long hard ride on the Turbo Trainer the day before.

It was a tough run today, so my legs would just have to do what they could. The plan was for just over 18 miles up, down, up, down, up, down and so on through the Shropshire Hills. Tough on a normal day but today it was cold, it was snowing and it was blowing a hoolie. On top of that it has been a very wet winter so everything was going to be muddy and slippery. The Offa’s Dyke guidebook I have states that the stage from Brompton Bridge to Knighton is:

the toughest section of the entire trail, with some steep climbs and steep descents as the Dyke heads directly and uncompromisingly across the green hills of south Shropshire, which are unhelpfully aligned from east to west.

We left a wild and windy west Wales and drove east to Montgomery through snow flurries. Once there I donned my brand new shoes – I know, it’s probably not a good idea for my first run in brand new shoes to be difficult 18 miles, but when have I ever listened to common sense? They are Inov8 X-Claws though which were the same as my last pair, albeit a different year and a different colour, so I thought they’d be OK.

Anna then dropped me right on Offa’s Dyke so that I could continue along it’s now distinctive earthwork heading south. The Dyke was evident right from the start today and was an almost constant companion for the entire run. I snapped a quick photo of my new shoes and started my run.

The first part was fairly easy going through undulating farmland with the dyke and ditch alongside. 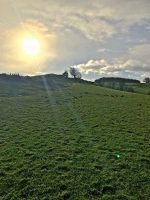 Sunshine on the Dyke

I was going to count the gates and stiles today as I passed through them but soon lost count as I made my way across the countryside. These runs seems to consist of hundreds of gates and stiles. All of them different, each with its own quirks and many of them very slippery. I have to admit, there have been times late on in a hard run where I come to a stile such as the one below and wonder if it would be easier to crawl through the dog gate rather than heave my aching body over yet another stile. 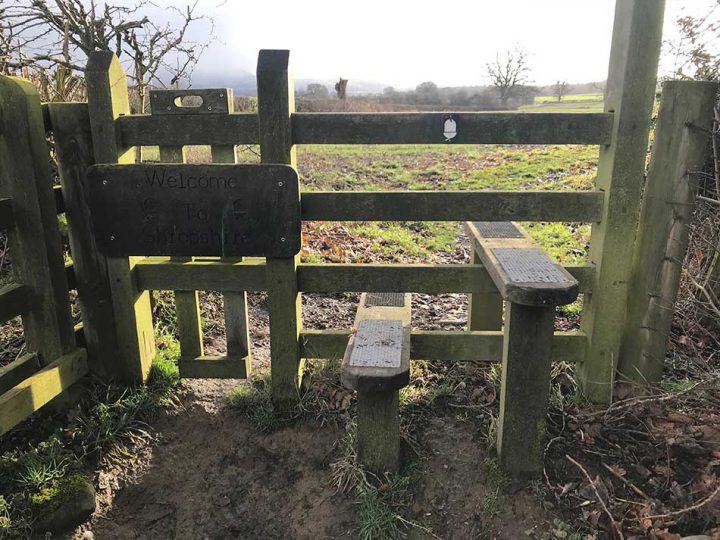 I passed through various farmyards, countless fields, over little bridges and headed onwards to Brompton Bridge. The early sunshine soon gave way to dark brooding clouds and then snow flurries. These were accompanied by a strong, bitter wind from the west that buffeted me and tried to knock me off my feet. As expected, the going was slow and very wet as I squelched and splashed my way through the waterlogged fields. 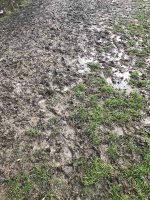 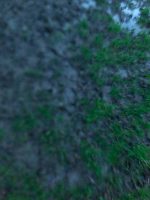 The second of these photos was a mistake, taken as I put my camera away, but I thought it quite nicely summed up the way things felt. At a farmhouse called ‘The Ditches’ I came across an out of place signpost that seemed to point to places in Ireland – surely I wasn’t that far off track? Thankfully not and the familiar acorn sign of the Offa’s Dyke Trail continued to point me toward Brompton Bridge. 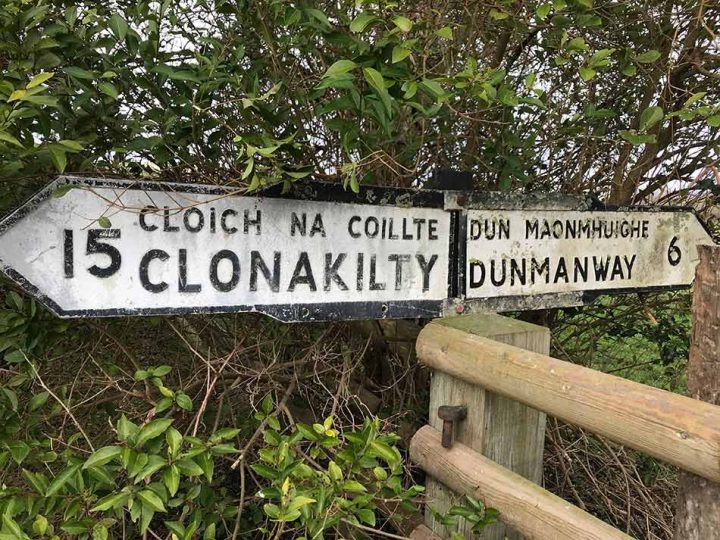 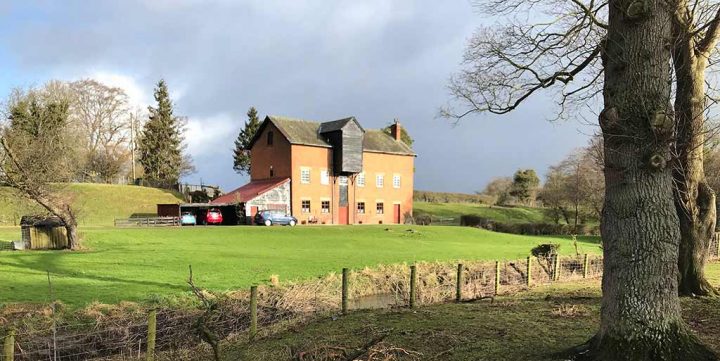 After a brief stretch of tarmac I was taken into the woodland of Mellington Hall. Snowdrops were out in force here and the going was a little easier as the ground was drier. Even the uphill section felt OK and the roots, twists and turns of the woodland paths always make for interesting running. There’s no time to look around as you have to keep your eyes on the ground as you leap over roots and look for the next footfall. I like these sorts of trails and as the trees whizz by you even feel as though you are moving at a decent pace. 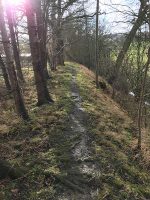 I passed a small caravan site, had various little flights of steps to negotiate and then a few more muddy fields with the dyke marking their boundary before I emerged out onto a minor road and it started snowing heavily. 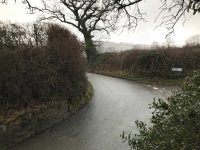 I had taken my hat, gloves and buff off earlier on the run but my gloves went back on now, my buff went on too and up went my hood as the snow got heavier and heavier. It continued to snow on and off for much of the day. Mainly on, with brief sunny spells in between.

The path headed steeply upwards here towards Crows Nest and the Kerry Ridgeway. I was feeling good though and making good time despite the steepness of the hill and the weather. I crossed the Kerry Ridgeway, a path that we rode along in 2015, and then crested the hill before descending a steep and very slippery path down through Nut Wood. It was hard to stay on my feet here. The steep off camber slope was slick with mud and almost every step led to a slip and a stumble to regain my balance. This was going to be par for the course for the rest of the day really.

There was a brief respite from the off-cmaber slippery slopes at the bottom of the valley as I crossed a little foot bridge. 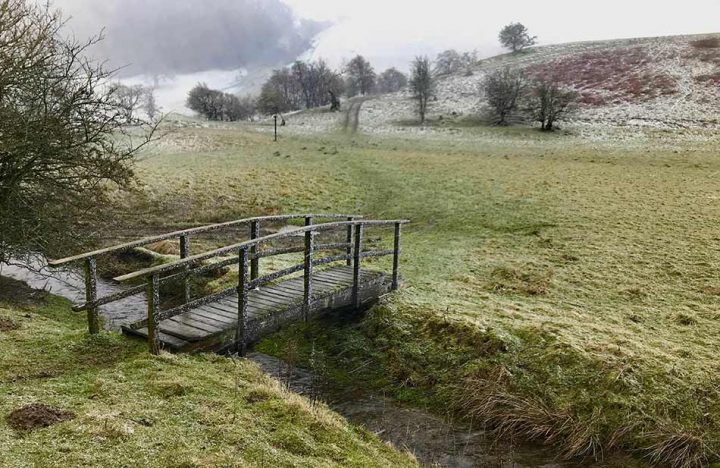 This slightly easier ground didn’t last long though as I was soon trudging my way up an equally steep and equally slippery slope on the other side of the valley. The wind had increased now too, or I was in a more exposed location. It was still snowing but there was a brief glimpse of blue sky as I looked behind me and back down into the valley.

Blue Sky through the Snow

As usual, the photo doesn’t do the slope justice and I was reduced to power-hiking up the top of the hill. From here, the path just went either straight up or straight down. Most of the time it was too steep to run properly whichever way the gradient was. The downhills were actually slower than the uphills as I struggled to stay on my feet. The snow kept coming, as did the wind and the contours were unrelenting too.

There were occasional tracks to follow but most of this was across water-logged, snowy, muddy grassland. Sometimes with mud up beyond my ankles.

The descent and climb through the woods at Churchtown were particular steep and troublesome. The Dyke was alongside for much of the way. Sometimes I’d be running on top of it, other times next to it and here and there in the ditch beside it. There were times when the slope was so steep that I’d end up weaving back and forth on the slopes either side of the ditch half-pipe style.

Eventually I reached a milestone, the halfway point of the Offa’s Dyke trail complete with a signpost to mark it. 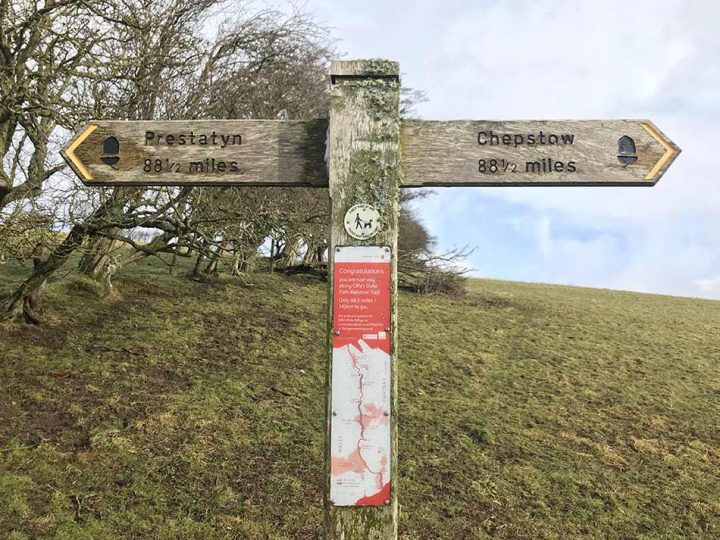 This also probably coincides with what is about halfway around the whole of Wales for me with just over 500 miles in total completed. Whilst on the subject of milestones, I’ve hit a few today:

I’m sure there must be others as well. I’m onto what I think is my 4th pair of shoes (I do run in them elsewhere in between my round Wales runs) and today I retired a rucksack that had been my trusty companion for the entire route so far. One of the zips finally succumbed so I’m onto a new rucksack now as well.

With the photo of the halfway point signpost taken it was ever onwards as the sun made an appearance again.

From here it was more of the same. Steep slippery ups onto the snow-covered hills and steep slippery downs where footing was difficult.

Offa’s Dyke marched across the countryside following the ups and downs. It can be seen cutting across the fields in the photo above.

It wasn’t the only thing marching across the countryside. When the sun came out, the snow clouds produced spectacular skies above the cold Shropshire Hills as snow-storms marched across the landscape too.

Snow Clouds over the Shropshire Hills

Skyscape above the Shropshire Hills

More climbs and more descents and then a nice bit of pace at last as the trail followed a snowy track with a decent surface around Llanfair Hill. 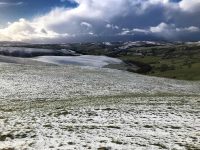 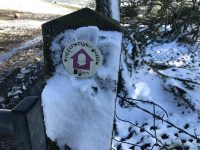 Signs in the Snow 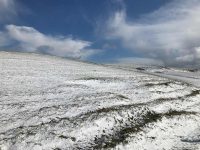 It was soon back to the sloppy, gloopy mud, off camber slopes and narrow tricky trails though. I was soon treated to some nice views from the trig point atop Cwm-sanaham Hill.

The weather soon closed in again though as I followed the contours around to Panpunton Hill. From here I caught sight of Knighton and my destination for the day in the valley ahead. 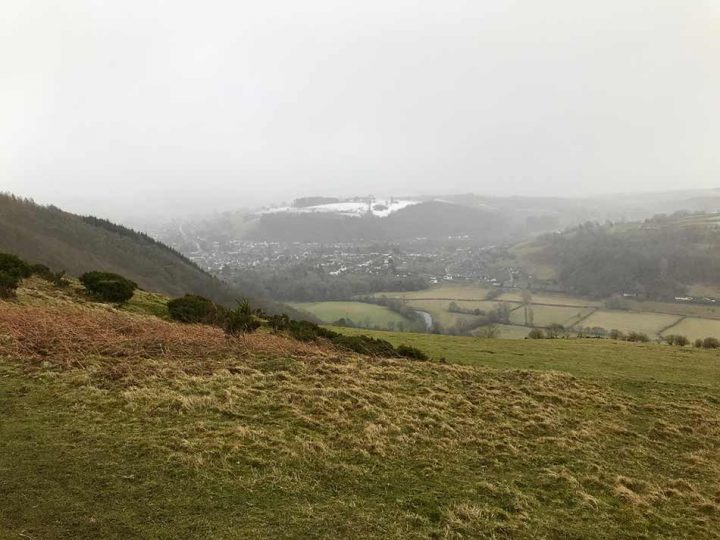 Knighton through the snow

Another steep descent into Knighton and I crossed the River Teme and yet again crossed the England Wales Border. 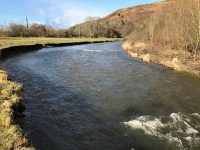 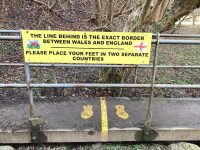 From here it was just a short little run up to the Offa’s Dyke Centre where Anna was waiting for me. She seemed to have had a pleasant enough day sat in the Visitor Centre and bought me a toasted teacake and a hot chocolate.

We sat and drank our drinks while I recovered from the days exertions. It had been quite a wild day on the Offa’s Dyke trail today with lots of difficult terrain covered. I’m making good progress though, even if my new shoes don’t look quite as new as they did when I started. They felt fine though, as did my feet.

Next time it’s Knighton to Kington which should be a little shorter, a little easier and has a decent bus to get me back as well.