With Anna away it was left to me to run the Scout Day camp on Saturday. We had decided that the Scouts hadn’t been camping for a while but we didn’t have time for a proper camp so a ‘Day Camp’ was needed. The idea was to let the Scouts have a fun day on the beach and to use it as a recruitment drive too. Scouts were told to bring a friend in the hope that maybe some of their friends would enjoy it and want to come along every week.

Planning and Organising a Day Camp

Plans were made, ideas for activities were hatched. Permission was gained from Natural Resources Wales and all was set. We had orginased for one of the wardens of the nature reserve to take the Scouts and their friends on a nature walk which included some activities too. We had some tools and equipment for making fidget spinners. Tents were to be erected, banners put up, cricket sets, rounders set and boules were at the ready. Cira had sorted out food for lunch, tables, gazebos and shelter were ready to go and I think everything was under control.

Not only that but it was looking like a gorgeous day. Blazing sunshine, golden sands, very little wind and the perfect temperature. Someone was looking out for us as it’s usually pouring with rain for such things!

Morgan and I were first at the beach so I popped over to the visitor centre with the various signed permission forms, risk assessments and other paperwork. There seemed to be quite a bit of it for such an event but everything was in place and Catherine the warden was ready to take them for a nature walk later. The beach was looking nice though and the camper looked to be in it’s element. 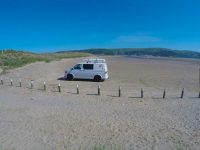 As the other leaders and helpers arrived we started putting up the shelter and gazebo but left the tents for the Scouts to do – they were supposed to be camping after all. Although saying that a few helpers and parents couldn’t resist having a go themselves. 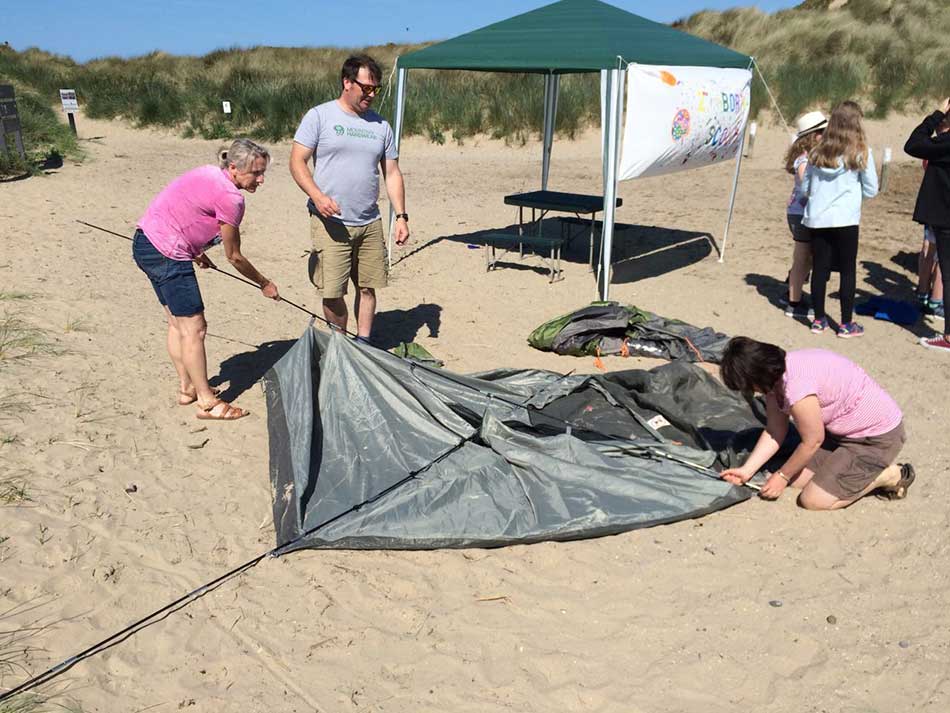 Once everyone was there we had 31 children and quite a few adults that were staying for the duration. A photographer from the  local newspaper the Cambrian News was there to take some photos so we all posed for those and then got busy putting up the tents. 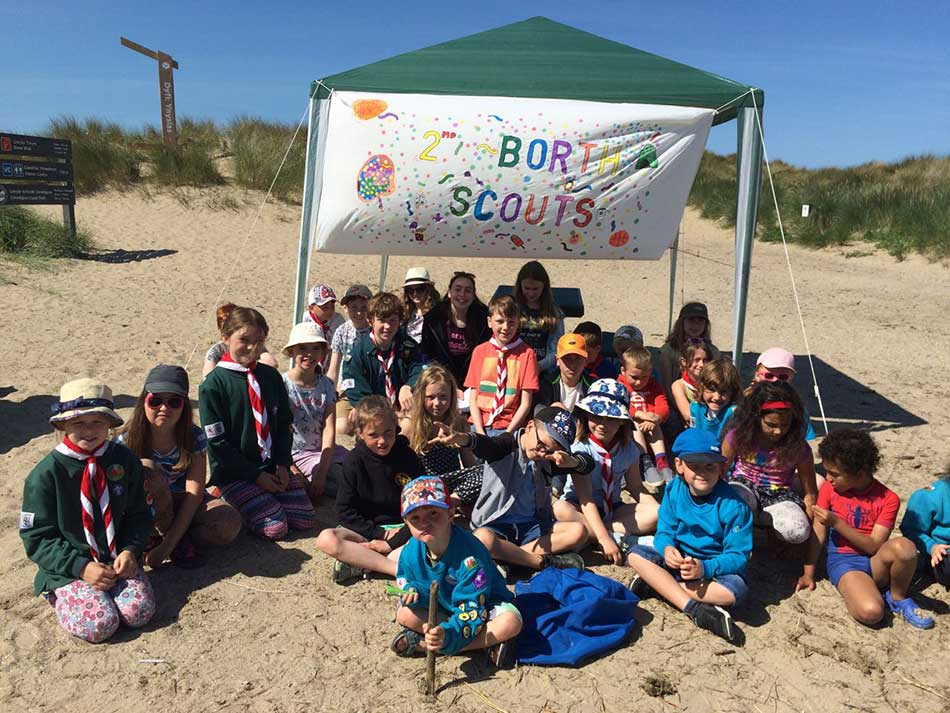 Before long one group headed off for the nature walk. This involved some activities and some running up and down a dune so they all returned hot and sweaty but saying that it was really good.

Playing in the Dunes 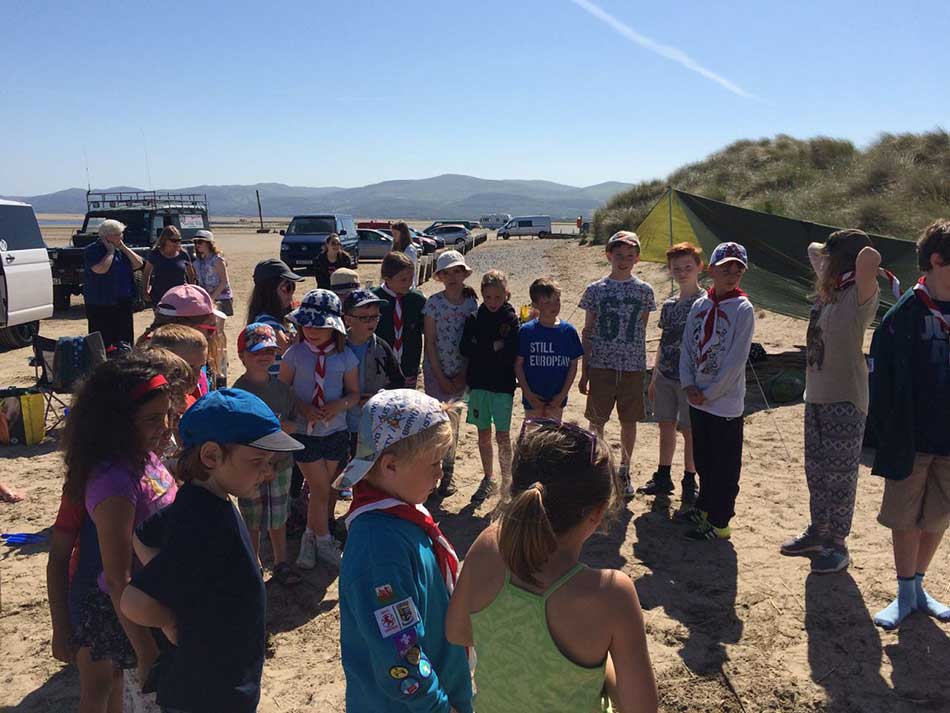 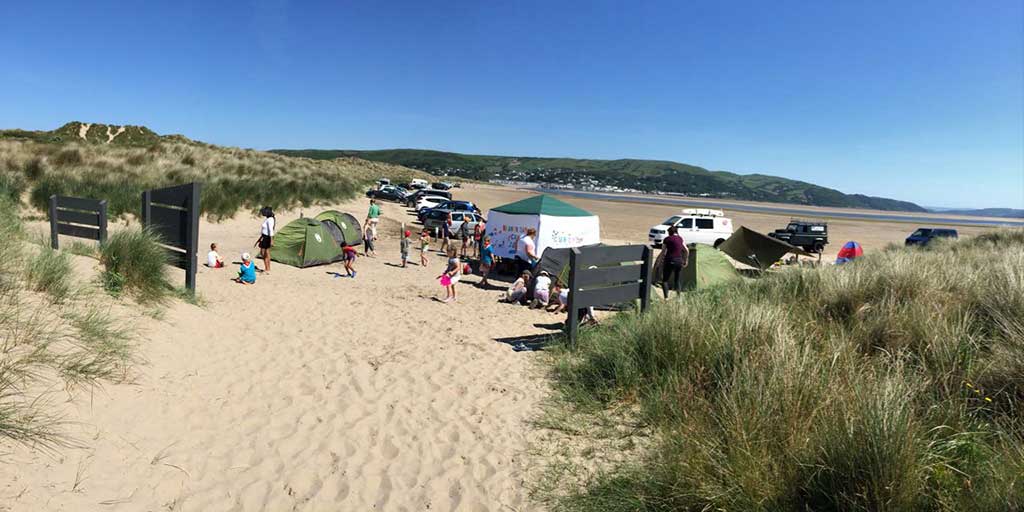 Meanwhile other groups were making fidget spinners in the gazebo whilst others played games on the sands. Everyone was busy and the camp area looked good with the gazebo bedecked in the banners the Scouts had made last week. 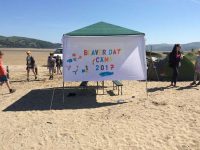 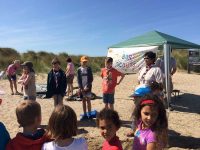 Lunch went down well and the activities continued. Sand-castle building and digging holes and games of ‘get the stick’. There was a little bit of drama when some a couple of children (completely unrelated to our group) got cut off by the tide on one of the sandbanks. Lee helped out with the coastguard as this went on and soon the lifeboat came out to them as well. They had been brought back to safety by a passing boat by then anyway.

Before long it was time to pack up once again, so our thank-yous and goodbyes and head off home. Although it wasn’t quite home time for us yet as we had to go to the station to meet anna off the train. She had been on the Isle of Man for a few days but was back home now having missed the day camp – I’m not sure if that was planned or not!

It all went well though and everyone had a good time, The weather couldn’t have been better and the activities were enjoyed by children and parents alike.