Back to it today with my Wales Coast Path run. I hadn’t been able to do a Coast Path run for a couple of weeks due to other commitments. This was probably a good thing as I had been having ankle issues on my last couple of Coast Path runs so an enforced rest was probably overdue. The word ‘rest’ is of course relative. I was still cycling a fair bit and running just as frequently, it’s just that the runs had all been around the 6 mile mark. My ankle had been fine with this, so today was going to be a bit of a test. The plan was to finally finish off Anglesey with a run from Red Wharf Bay to the Menai Bridge. This would be around 20 miles in total, but if my ankle was sore then I had a get out clause at Beaumaris which was 13 miles into the run.

I left the house in the dark at around 5am for the now familiar drive to Anglesey. Autumn was in full effect and it felt like I was driving through the scene of a car commercial. Leaves were flying everywhere as I sped through the  autumnal roads of Wales and there was barely another car insight. I arrived at Red Wharf Bay at around 6:40am, got changed and headed off into the gloom.

The route took me down a little lane and then out onto the sandy, muddy shores of Red Wharf Bay. I was being careful with my footing as it was still dark really. I could just about make out the muddy path that meandered its way around the edge of the estuary. However seeing what was under each footstep wasn’t so easy. This was ideal though as it meant I had a nice easy start at a relatively slow pace. The light improved as I made my way through the mud and sand and then up into some low dunes. 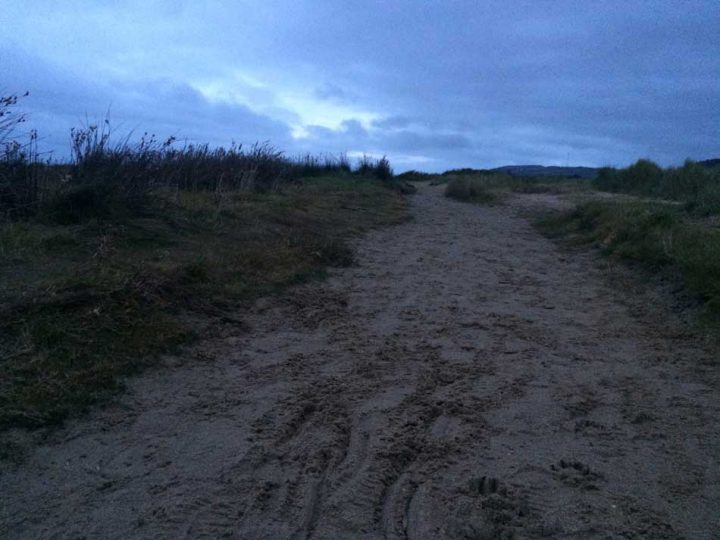 On and on Red Wharf Bay went with me weaving along the snaking path. I tried to avoid the soft sand as much as possible.

At times there were little sections of boardwalk over particularly marshy areas. There was also a long stretch of an old sea wall that I ran along. Eventually the path brought me back onto the sands and then out onto a small road at Llandona where a deserted car park and some locked toilets greeted me.

So far there had been no elevation gain at all, but a large hill loomed ahead of me, topped with a giant radio mast. Finally, Red Wharf Bay came to an end and the sea was in sight as I made my way along it’s eastern shore and up onto the hill.

The hill took me through a few fields and then up a steep set of stairs cut into the hillside. I emerged from these onto double tracks and through fields of long grass as I passed the large Radio Mast and continued on my way.

I was now about 5.5 miles into the run and all felt fine. My pace wasn’t fast but it was steady and my ankles felt fine. On I went through countless gates, over stiles and across fields, making my way ever closer to the Eastern point of Anglesey. Occasionally I could glimpse the distinctive outline of Puffin Island in the distance, and the Great Orme was just visible through the clouds on the horizon. It never really got properly light as low cloud kept the day grey and dreary. 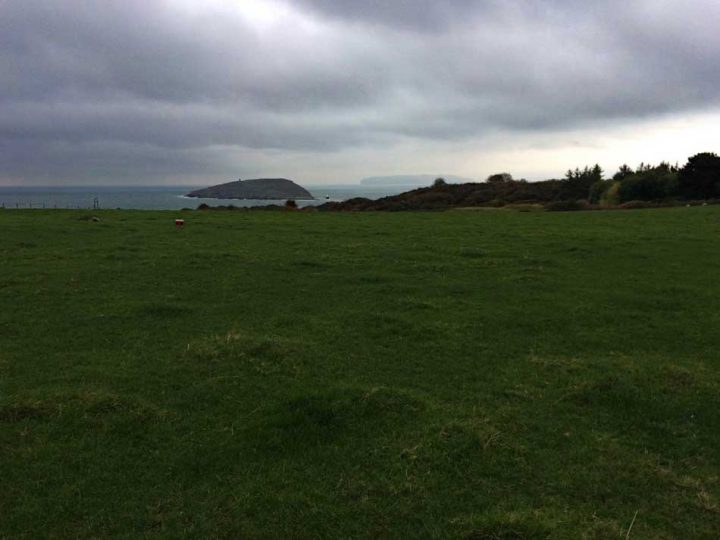 It was nice running conditions though with a cooling headwind and sensible temperatures. There was little of note along this stretch of the Coast Path. It ran a little inland along lanes and through fields. There were some nice houses and an interesting Windmill at one point but I never actually got close to it. The tracks were covered in autumn leaf fall but never too muddy. Sheep and cattle inhabited the fields I passed through but they largely ignored me as I made my way through the landscape. 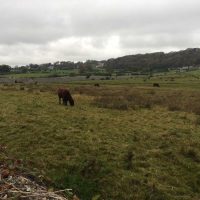 Cattle in the fields 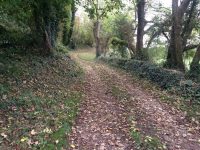 Eventually, Puffin Island came into view properly and soon the lighthouse and bell buoy on Perch Rock could be seen. I made my way down to sea level once again at the point overlooking Puffin Island and then doubled back along the road towards Penmon. I was now heading SW back towards Menai Bridge. 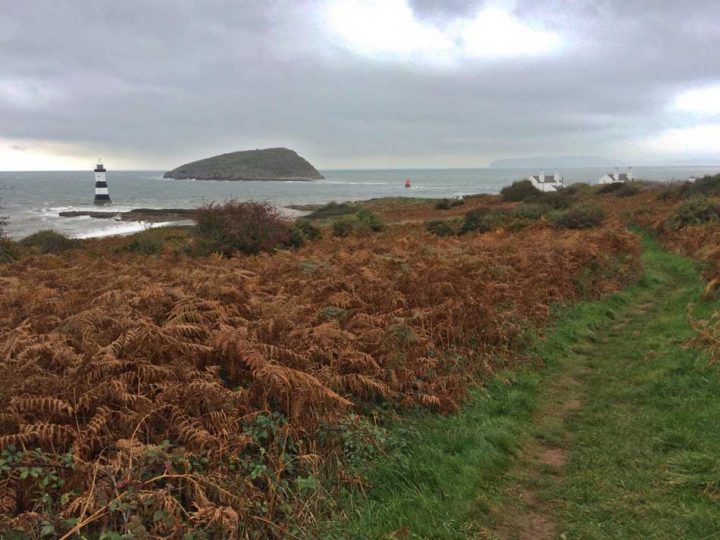 The point at Puffin Island

The remains of the old priory and a Dovecote at Penmon drew my attention as I passed through this little settlement. 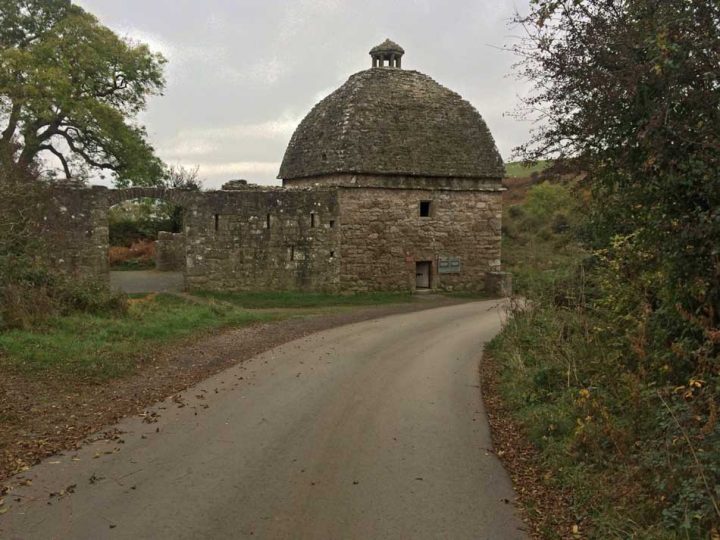 The Coast Path then followed the minor road for a while as it clung to the shore of Porth Penmon. There were a few camper vans and motor homes parked up in laybys along here and people were just beginning to stir from them. The autumn hedgerows were dripping with berries and ivy flowers as I followed the road. 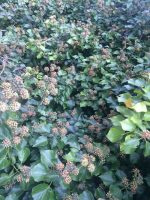 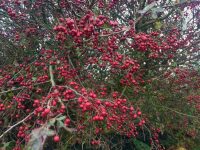 The Coast Path then took me down onto a sandy beach. This soon became a pebbly, boulder strewn beach. Running along here was next to impossible so I was forced to walk as I picked my way through the boulders with interesting red-conglomerate cliffs to my right. 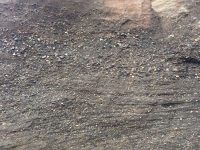 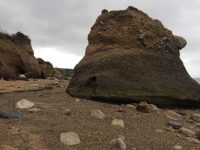 Not the best for running along 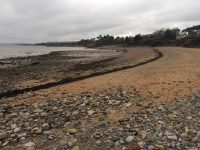 After a couple of miles of this I emerged onto a road and then followed the path up and over a grassy field and down into the town of Beaumaris.

It was quiet here today but seems as though it could be quite a lively place at times with some interesting architecture and some grand looking hotels. 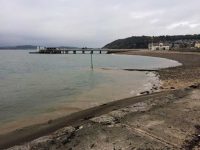 Out of Beaumaris, the Coast Path headed steeply uphill passed the Baron Hill Golf Course. It then weaved its way through a muddy woodland and emerged out onto a small road that gradually took me downhill through Llandegfan. 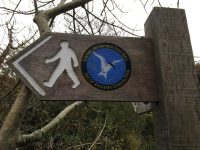 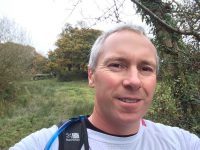 From here I caught my first sight of the Menai Bridge, my destination for the day. 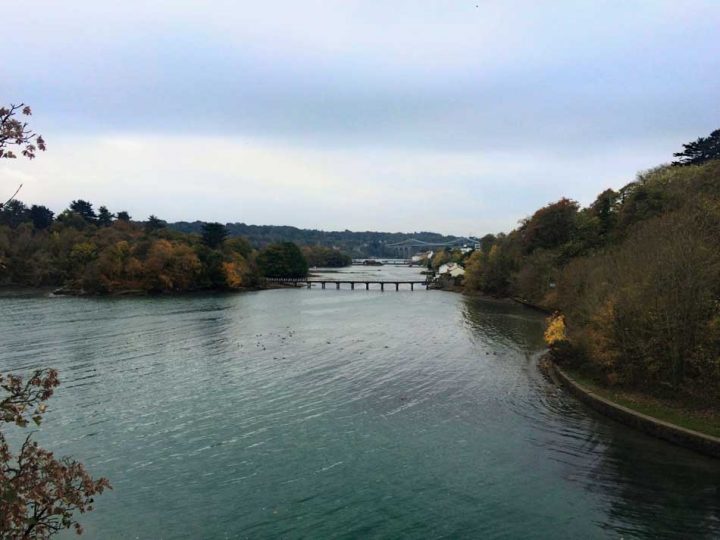 The road continued down into the town of Menai Bridge. The path then weaved it’s way through the town, hugging the coast of the Menai Straits. The massive towers that support the Menai Suspension Bridge dominated this part of the town. Built from Penmon Limestone they are 30m high. 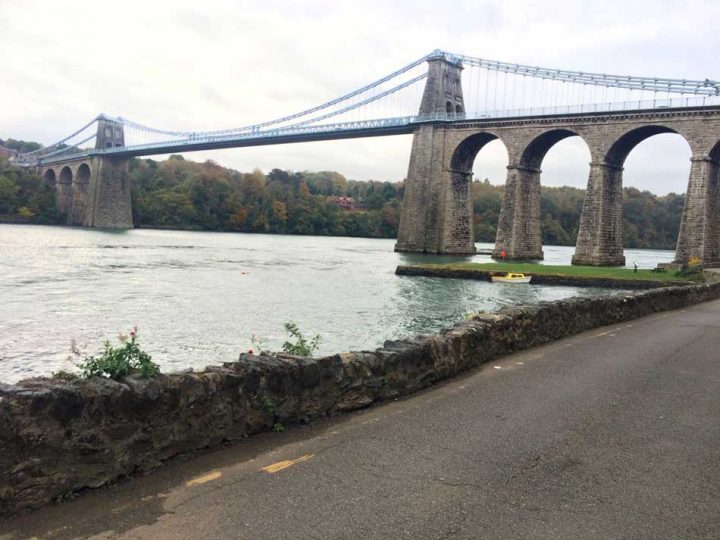 Back at the car, and all was well. Just the matter of the 2 hour drive home with a stop for petrol and a burger. Another good day on the Wales Coast Path. Another 20 miles ticked off without incident and a milestone completed in the form of Anglesey. Next up is the North Coast of Wales.