My training for the upcoming Ocean Lava Half-Ironman distance triathlon has been going from bad to worse. In fact as mentioned previously I haven’t really been ‘training’ this year, just exercising. I’ve had a shoulder injury so no swimming. I’ve had achilles problems which has stopped me running a little. Then last week I had some sort of lurgy which kept me off the bike. I haven’t been going to the gym, doing circuits or any other maintenance type workout either. All of which means I shall be winging it a little in this race and just seeing if I can go the distance – It is four times the distance that I usually do after all.

The lurgy seemed to have subsided a little on Sunday morning though and I wanted to see how my legs would feel on a run after a 56 mile bike ride. A little bit of race simulation was in order. I didn’t want to drive all the way to Fishguard though to ride around the actual course so decided to do it at home. I used TrainerRoad and Best Bike Split to replicate the course so that I could do it on the turbo trainer. Yep, 55 miles and therefore just over 3 hours on the turbo trainer – that’s dedication for you! 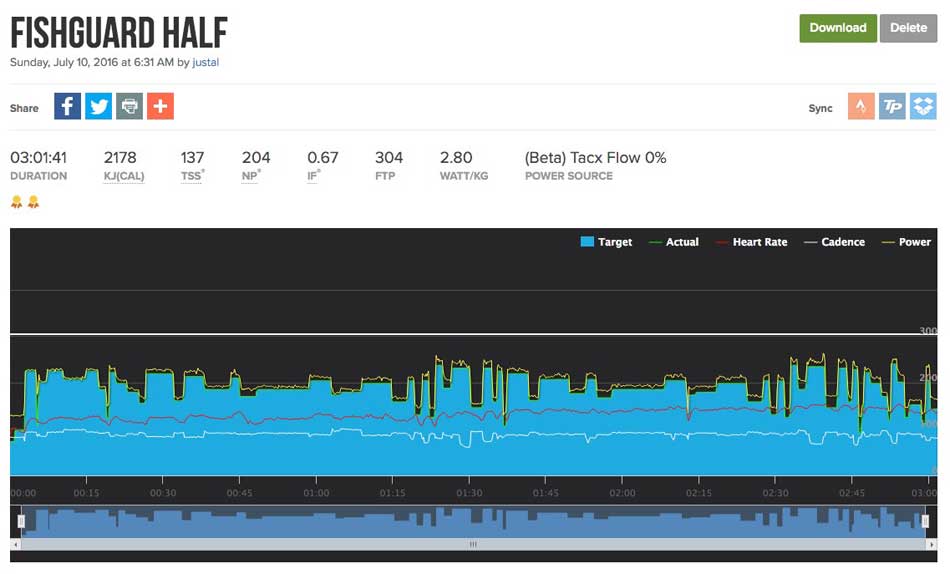 I then got straight off and went out for a short run around the Boat Yard Loop. The legs felt OK for the first mile or two, but I was pretty tired by the end of it. I certainly didn’t fancy running around another 4 times to make it close to the 13.1 miles I’ll be doing on race day.

Not quite a race simulation as I didn’t do the swim before hand and the run was only short but it did help. I think I’ll need to eat more on the bike and maybe take it just a little bit easier on the bike as well if I’m to run the whole half-marathon. If not, there may be some walking involved.

I did manage to go windsurfing in the afternoon as well in pretty big conditions which was good, but manage to twist my knee whilst walking back up the beach with my kit, so it looks as though I’ll be resting once again trying to sort that out. I’m definitely getting too old and fragile for all of this!