Our Santa Christmas Cake is ready.

Anna’s been busy playing in the band recently, concerts here, concerts there and various fund-raising sessions at Morrisons, so whilst she was out playing a concert to the Llanafan WI on what was a very wet Saturday afternoon, Morgan and I set about decorating our Christmas cake. I had already baked them weeks ago and had been feeding them with brandy ever since. Last weekend I covered them in marzipan and iced the first of the cakes with chocolate icing. The larger round cake was then left until this weekend when we had time to turn it into a proper Santa Christmas Cake.

marzipanned and ready for decorating 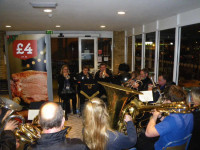 Anna playing in the band

Morgan and I spent about 2 hours covering it with white icing, making little bricks to build a chimney, making a Santa figure who is stuck in the chimney, adding arms, cuffs, hands, a beard and funky moustache and then his hat. It was then finished off with snow, snowflakes and a nice bow around the bottom. Morgan quite enjoyed it and the final result is pretty good too.  We hope you like our Santa Christmas Cake. 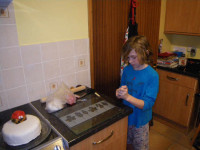 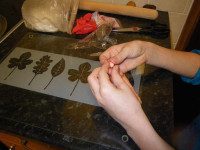 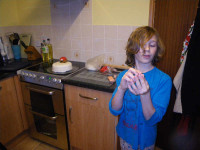 As well as decorating the cake we did some stop motion photography too, so as a festive treat here’s our Santa Christmas Cake in the making.

Now it’s just up to me to eat them both – Although with that amount of icing on top, I think I’ll let someone else eat Santa!