More interesting Internet ‘illiteration’ as the sea keeps giving. After a week of sensational submarine swims in Aberystwyth, it was time for some fabulous fishy fun at the weekend.

The clear starry skies that we enjoyed on Friday evening whilst playing in the dunes at Ynyslas with the Scouts had gone and our watery West Wales world was shrouded in haze and the sky full of cloud. There was still no wind though, the sea was calm and still crystal clear so Shem and I headed into Borth for a planned fishing session on our Stand Up Paddleboards. It was still a little chilly with no sun to warm the early morning air but as we got ourselves ready we could see dolphins out by the reef and the sea state looked perfect.

I’ve had no luck with fishing in the past having only had a few quick goes in the estuary at Ynyslas, but today we were kitted up to get some mackerel off the rocks of Borth. First though we headed out to the reefs to see the dolphins. They came fairly close to us, not as close as they have done, but certainly a lot closer than the only photo I managed to get of them would suggest. 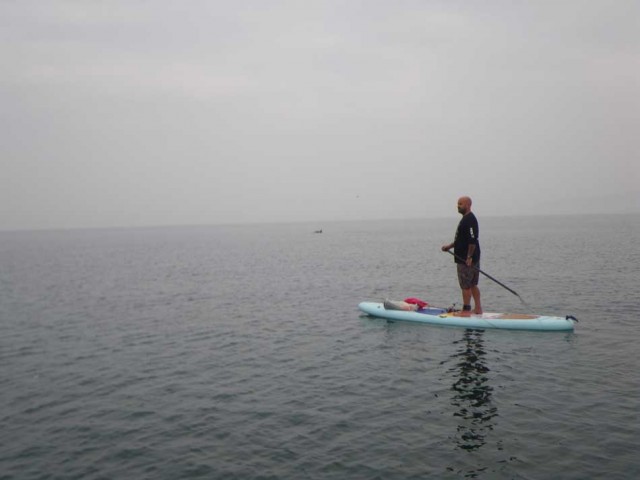 Shem with Dolphin in background

After a bit of time with the dolphins we tried our luck with the mackerel feathers just offshore from the buoy, but were unsuccessful here so headed over towards the rocks of the point. Still no joy here either so around the coast towards Aberwennol we went. There were a few people fishing from the shore here, but still no joy so we headed out into deeper water which is where we found them. Soon we were catching mackerel like mad and filling up our bags. Hooray, we were going to have a fantastic fishy feast from free food.

After a while we headed back over to the rocks and paddled around looking down through the clear waters to the world below. The water is about as clear as I’ve seen it and looks amazing at the moment. Shem had a quick go with a Bass lure that he had with him and straight away caught a nice 47cm long Bass. 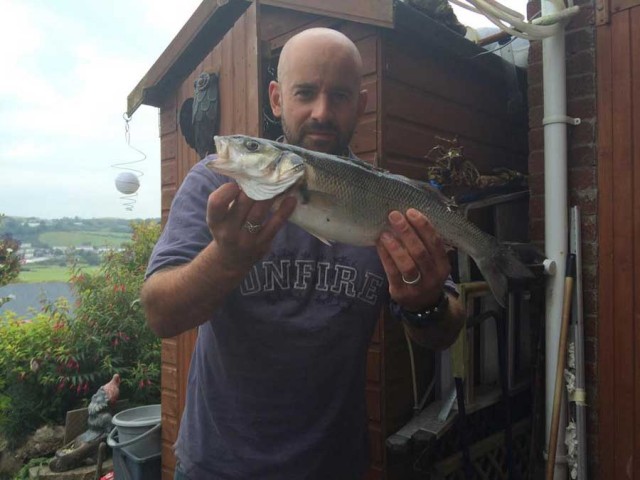 He tried to get another for a few minutes but it was now getting a little later in the morning so we headed back to the beach and were onced again joined by the dolphins for a little while. Not a bad way to start the day.

Back at home it was time to prepare the mackerel. I gutted them and removed their heads. Some were then left whole ready for stuffing and baking, others were filleted ready to be grilled. Some were placed in the fridge for dinner, the rest in the freezer for another day.

The afternoon wasn’t wasted either with a bike ride, a run and then lots of chores around the house. I mowed the lawn, got rid of the last bits of the old shed and installed some new outdoor lights. Then after some chores around the house it was time for our fishy feast. The whole mackerel were stuffed with herbs and butter, wrapped in foil and baked in the oven. The fillets were grilled with a homemade yoghurt, honey and mustard sauce and they were served with herbed baked potatoes, broccoli and a sautÃ©d  apple and onion relish. Mmmm Mmmm. 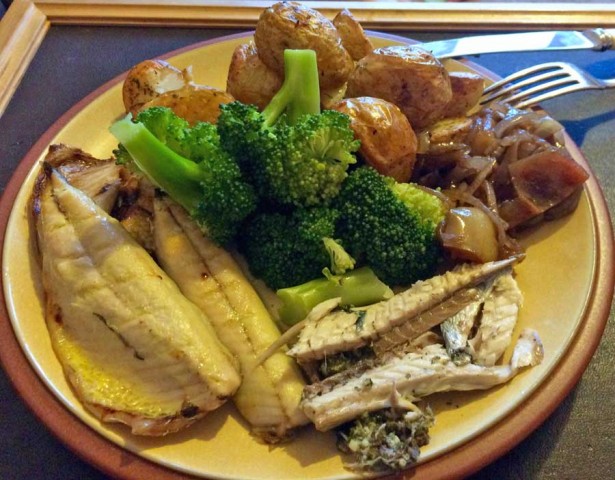