It was the last day of the school holidays on Tuesday and a day before Anna’s birthday so we had a busy day – or at least I did. Morgan was supposed to help out but the lazy boy didn’t actually do much other than play on his computer or when I told him to get off it, play on his iPad… Time to ban the technology I think.

After a bit of work and Anna heading off to work I started with some stretching in the morning as I need to start focussing on some training and conditioning again, then out for a little run – yes, my foot seems to be holding up for runs of up to 15 minutes at the moment. ‘Lazy Boy’ wouldn’t come with me though. Then off to the shop for some supplies, again without Morgan as he’s too lazy and it just wasn’t worth the hassle as it’s easier and quicker on my own.

Back at home it was time to knock up some delicious chocolate brownies, complete with white and milk chocolate buttons and flaked almonds for Anna to take to work for her birthday. 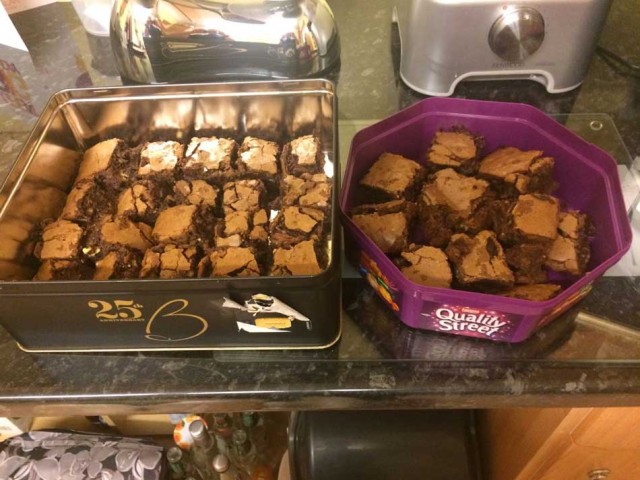 I was of course doing the laundry, cleaning and tidying at the same time. With the brownies in the oven it was time to get ready for my business meeting with a local author and former TV producer and director. This went well as he wants a website and paid the deposit there and then.

The brownies were cooling and the house was smelling nice. Time for lunch, tuna omelette for me but as Morgan is lazy he had half a Pot Noodle. Next on the agenda was some lawn mowing. Morgan was supposed to come out and help by emptying the clippings every now and then and said he’d be out in a minute. Of course, by the time I’d finished there was still no sign of him – lazy boy! So, once I’d finished in the garden I decided it was time to force him over to the beach. Have you ever heard of a child that needs to be forced to go to the beach?? The surf wasn’t up to much, but there was a breeze so I took his kite. He said he didn’t want to fly his kite though so I thought if I just got it out and flew it he’d want to have a go, but no, he just sat there on the pebbles watching. He did have one quick 30 second go on it and then decided that was enough. Whats the point of forcing him to have fun?

After a while we wandered home and I got to work on the new website I was to build. I’d given up with Morgan by now, I’m not sure what he was doing, I had told him not to go on his computer, but I think he was on his iPad instead, but I had work to do so decided not to bother making a fuss as it would only prevent me from getting on with my work. I guess I should have given him a long list of chores to do instead really.

Next it was time to cook dinner ready for Anna’s arrival home, but a phonecall from her to say she was running late meant that we didn’t eat together because as she arrived home I had to leave for the gym. Anna wasn’t at home long either as she and Morgan were heading off to band practise. A couple of hours at the gym and I collected Morgan halfway through the band practise to take him home to bed.

Back to school tomorrow and time for a new regime I think… No computer or iPad before he’s completely ready to go to school in the morning, and the same in the evening – no computer before dinner and no computer after 8pm. I suppose he did use it briefly to make Anna a birthday card, even if it was a simple one from a template…. Lazy Boy!