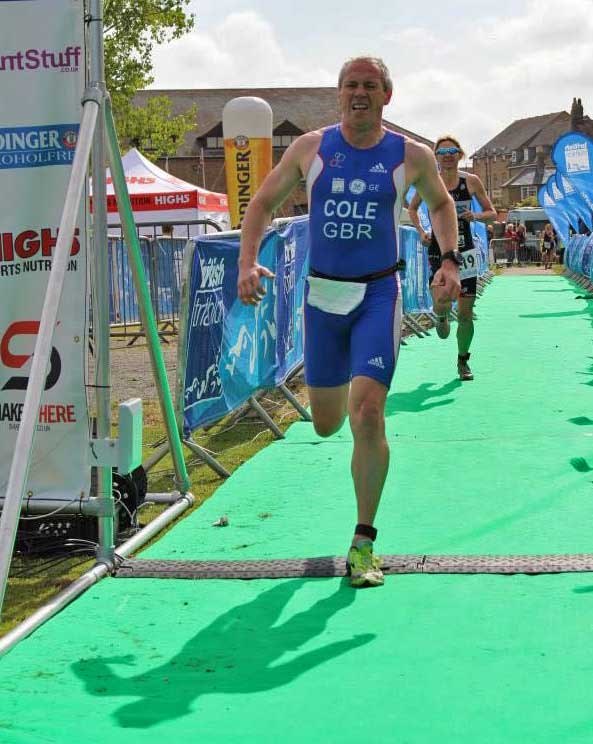 That pained expression is what it took this year to qualify for the World Champs later in the year and the 2016 European Champs.

Yep, I’ve just had confirmation that I have once again qualified for the 2015 World Triathlon Age-Group Championships that will be held in Chicago this September, and the 2016 European Triathlon Age-Group Championships in Lisbon next May. That’s nothing new as I’ve qualified for these for the past few years. I’m still quite pleased with it though, especially seeing as I haven’t really been taking my training that seriously this year and the fact that a foot injury in the qualifying race in St. Neots at the weekend slowed me down quite a bit on the final lap of the run – hence the pained expression in the photo above. I did at least manage to finish, and finish well enough to qualify for Team-GB. Trouble is, I haven’t been able to walk since!

Next on the agenda is to get my foot sorted, so I’m off to the sports injury clinic tomorrow to see if there’s anything that can be done to help speed the recovery. Then I have to decide what races I’m going to do next.

The World Champs are in Chicago in September. It would be nice to do them, but I don’t think I can afford to do so really, so maybe I should just focus on saving some money for the European Championships for next year and make a family holiday out of it too. I imagine that Lisbon can be quite nice in May.

I’m also supposed to be trying my first attempt at a longer distance race in August, jumping from Sprints to four times the distance at a half-Ironman. My foot injury may put pay to that as I can’t walk at the moment, let alone start upping the running mileage. I was hoping  to get in quite a few long bike-run brick sessions to prepare for the longer distance. I was planning to do some long 60+ miles bike rides followed by shorter < 5mile runs, and some shorter but harder 25-35 miles cycles followed by longer 8-12 miles runs. However, I’m expecting the main advice from the sport injury clinic tomorrow to be “rest”, “rest” and more “rest” so it looks as though I won’t be able to follow that plan. Four weeks of rest didn’t help my foot at all, so it looks as though run training might be out of the question for the Half-Ironman. ‘Winging-it’ on the 5km run in a sprint distance triathlon is one thing, I don’t think I can wing-it in a half marathon though.

Of course, I’m no sports injury specialist so they may be able to work some magic, but I’m expecting the diagnosis to be plantar fasciitis, and I’m expecting them to strap it up quite heavily, give me some plantar and calf stretches to do and tell me to rest it. I guess I could save myself £30 and just take my own advice anyway, but I’m half hoping for them to work a miracle. It’s unlikely that they will, but I figured that a £30 gamble is worth it just in case they can work miracles!