A Day out in St Neots

Racing in Triathlons tends to take us to places we haven’t been before, and St. Neots in Cambridgeshire was one of these places. We drove down after school and work on Friday evening and arrived at a nearby Premier Inn which was to be our bed for a couple of nights. It was quite late by the time we arrived and we had stopped en route for some food so once settled in it was straight to bed.

I didn’t really sleep so I was up and out on my bike for 6am in order to ride around the bike course for the race. The Premier Inn was only a couple of miles from the Race HQ, so I had an easy ride into St.Neots before heading out onto the bike course. I was taking it easy as this was a course recce and not a training session. I met another guy on the way out so had a chat with him for a while as we battled against a strong wind. I then turned off and followed the course around, before heading back to the hotel where I changed a slow puncture in the car park.

Once the others were up and out of bed, we headed into a supermarket in St. Neots to buy some supplies and get breakfast and then parked up on the edge of town to eat breakfast and then go for a little stroll around the park. We ended up doing about 7 geocaches whilst on a nice walk along the banks of the Great Ouse River. We stopped off to play in several playgrounds that we passed and stopped to play pooh sticks on the little bridges as well. It was a chilly morning and a little overcast at times but we had a nice family walk and some fresh air. 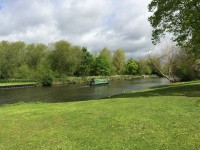 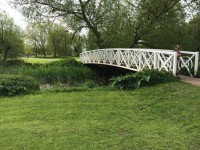 Back at the car, we popped into the cafe for a coffee and to plan our next move. This was another quick stop in the supermarket to buy a picnic lunch and then off to the Paxton Pits Nature Reserve to eat our lunch. It started pouring with rain whilst in the supermarket, but brightened up again by the time we got to the nature reserve. We passed through Little Paxton where there was a scarecrow competition going on so several houses had scarecrows in their front gardens, including a cool ‘Steve’ from Minecraft scarecrow that Morgan was obviously quite taken with.

After our picnic lunch Anna had a snooze in the car while Morgan played games on his iPad and I went for a stroll around the Nature Reserve. I sat watching the terns swooping over one of the lakes and Greylag Geese with chicks paddling around on the water before popping into the visitor centre for a look around. We then headed back into St. Neots and the ‘Eat ‘n’ Bowl’ centre where we had a game of ten-pin bowling. It was then back to one of the playgrounds where Anna and I sat on the bench watching Morgan play for a while and then he encouraged me to join him for a bit, before getting Anna to push him on the swings.

We then did a final geocache in St. Neots before heading back to the Premier Inn and then across to a Brewers Fayre pub next to a different Premier Inn for dinner. I decided to go for the Saturday night buffet which was a chicken feast and ended up having far too much to eat: Chicken fajitas and wedges to start, southern fried chicken with chips and coleslaw next, then chicken leek and potato bake with salad, followed by chicken curry with rice, chips, poppadom and mango chutney and some more southern fired chicken for good measure. Not bad! Chocolate brownie sundae for first pudding, chocolate fudge cake for second pudding and then hot chocolate back at the hotel room. It was then off to bed early ready for the British Sprint Triathlon Championships the following morning.