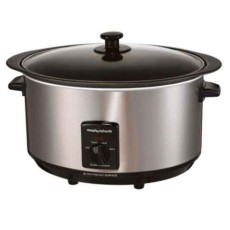 We’ve had a slow cooker for years and I have to admit it is lovely to head out for the day (whether that is off for a walk in the hills with Alan and Morgan or just a day at work) and have tea all ready to go when you walk through the door.

I have only ever made stew in our slow cooker. I have played with the variety of stew and we’ve had some lovely beef, pork and leek, beef and ale and chicken stews over the years.

I recently spotted a post from someone on facebook about a slow cooker lasagne they had made. I was intrigued but hadn’t plucked up the courage to give it a go. Then someone else linked to a facebook group all about slow cooking. I was amazed at the variety of things people were using their slow cookers for. Cooked breakfasts, cakes, roast chicken, pulled pork, rice pudding, bread and butter pudding, bread, omelettes and a huge variety of stews.

I had a nice new slow cooker for Christmas so decided it was time to give it a go. We started with a roast chicken. I put the whole raw chicken in the slowcooker on a bed of raw onions, potatoes and celery with half a cup of water. The recipes I had seen said to cook on high for an hour and then turn it down for about 5 hours either on a bed of vegetables or raised on some foil balls with no water but I wasn’t brave enough to not add any water at all. After an hour it didn’t look like much was happening so I left it on high and by 3 hours all the meat was falling off the bone and there was lots of juice to make gravy and all the veg was cooked. It was far too early for tea so I just turned it down and left it on low for another couple of hours. I gave the cooked potatoes and quick roast in the oven and made some gravy from the juices in the pan and served it all up with the other vegetables that had cooked with the chicken.
It was lovely. No waste from the chicken as all the meat completely fell off the bone with plenty left to make a pie with the following day.

I’m not sure I would bother with all the veg next time and would turn the slow cooker down to low after an hour. They did taste a little bit like stew rather than vegetables with a roast dinner but having them there did make a lovely gravy. Either way, something we would definitely try again.

What this space for our next attempts!