I’m doing my best to stick to my new plan of increasing my training a little as the race season gets ever closer.

As well as my large scale annual periodisation in which I’m trying something new, I also have a meso-scale pattern within my training where I do a 3 week cycle. This consists of a low volume and intensity week that I like to think of as a rest or recovery week. I’m saying ‘I like to think of it’ that way because to many people 10 hours of training comprising 3 swim sessions, 4 bike session, 3 run session and two trips to the gym would be far from resting, but it’s all relative. Relative that is to the week that follows it which is my ‘medium’ week where I do a similar number of sessions, but the duration and intensity is a little higher. If you haven’t guessed the pattern yet, then the third and final week of my 3 week cycle is a ‘high’ week where duration and intensity is pushed just a little higher.

The cycling aspect of my plan at the moment involves following the low volume 40k TT plan from TrainerRoad. It’s nice following a plan someone else has written, it keeps things varied and interesting and saves me having to think about it. I just see whats on the agenda for today, fire it up, jump on the turbo trainer and do as instructed. I picked a plan that would fit in with my overall plan and this one does so well as it too has a 3 week meso-cycle.

The first few weeks generally consist of 4 rides per week, with a supra-threshold interval session, a muscular endurance session, a tempo session and a recovery ride.

Last week was a high week and all was going well. Despite having a busy week at work and home along with lots of busy evenings and late nights, I had managed to fit in all of my sessions. That was until Friday afternoon after a day at work when I was supposed to do the muscular endurance ride when I got in. As with the other TrainerRoad sessions there was a weekly progression with these rides.

Such workout are never easy, but they are always good and I had completed them well in the past. On Friday though I felt tired and not really up for it before I started. Never a good frame of mind to tackle a difficult workout but I started it anyway. Trouble is, as soon as it come to the first of the intervals there was no way I was going to be able to do it. Psychological I was beaten before I started and when after just two minutes of the first interval I started dropping below my target power output I decided to just knock it on the head. I spun my legs for 10 minutes or so and gave up. 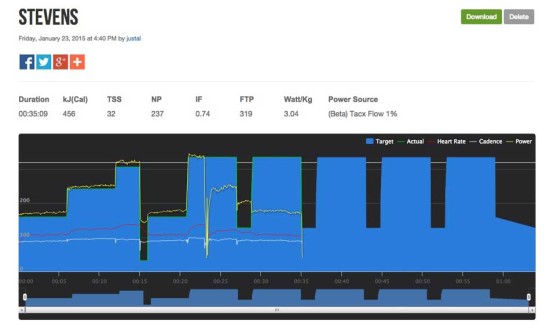 I could have tried to force it I suppose and completed the workout at lower power outputs but decided that rest and recovery after what had been a hard week was probably more beneficial than a bad workout. The plan from TrainerRoad does ramp up quite quickly which I guess is fine if all you are doing is cycling, but with the running, swimming and gym workout during the week too, this was just too much for me.

Not all is Lost

Saturday was a busy day dismantling a fishtank and other such household chores, so although no training was done it wasn’t the best of recoveries. Sunday turned out OK though. Running hill reps in the morning went well, as did my swim so hopefully I was back on track and my ‘High’ week had come to an end.

I was expecting a nice easy recovery ride on Monday morning, but when I checked my TrainerRoad plan it had me down to do a 30 minute Time Trial Test. I hadn’t expected that and as soon as I saw it started wondering if I’d be able to do it. Target power for the 30 minute Time Trial was anything above 315 Watts. When I’d tried to hit 334 Watts on Friday I had only lasted 2 minutes, so quite how I was going to hold higher than 315 Watts I had no idea. Once again I was starting the session in the wrong frame of mind, wondering if I’d survive rather than positively aiming high.

Once I got going though things felt quite easy and I soon settled into a decent rhythm with a decent power output. Time flew by when I was expecting it to drag and I finished strong. In fact it all seemed a little bit too easy really and I could probably have gone a little harder and my average heart rate of 139bpm for the 30 mins confirms this. I completed the 30 minute Time Trial with an average power output of 339 Watts. Yep, 30 minutes at 339 Watts when a few days before I couldn’t hold 334 Watts for more than 2 minutes. At least that shows that Friday was just a blip and I did the right thing by aborting the session before it got too ugly. 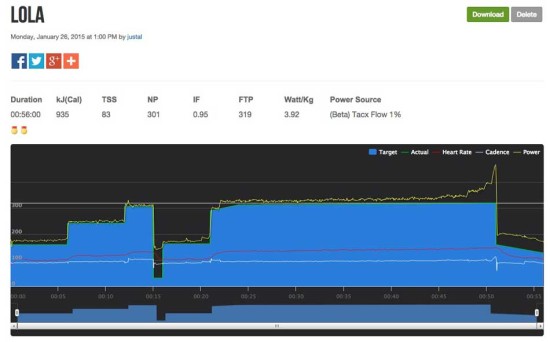 Hopefully I’m back on track and with a ‘recovery’ week to look forward to I’ll be fighting fit and ready to go once again. The aborted session on Friday may have been a little disappointing at the time, but hopefully it just shows that I was pushing hard and the ‘high’ week took me to my limits – for now of course – as I’ll be back to hammer out that particular workout in style sometime soon.