It seems to have been a week or so of re-locating ‘pets’. Last weekend it was relocating the beehives, this weekend, following on from the fish-tank leak it was time to re-locate the aquarium.

The latest news on the escalation of jobs associated with the fish-tank leak is that the new Aquatlantis Fusion 101 Aquarium set up complete with cabinet that I’ve ordered is due to arrive today. We’ve also ordered a new carpet for the office in which the new aquarium will go and so will start decorating the room this week. The first job on that front will be to box everything up and move all of the cupboards, bookshelves, desks, filing cabinets and computers out of the room. Quite where we’ll put it all is not yet known, but we’ll work something out. All of this was prompted by the fact that the leak in the fish-tank leak meant that it would have to be completely dismantled before a new one could take its place. That in itself was a major task and one that we don’t expect to do too often, so whilst that was being done the rest of the room may as well be decorated too. If we didn’t do it now, it could be another 10 years or so before it was done.

So, over the weekend, the task of dismantling the leaky tank was tackled. I bought a £20 second hand tank from someone in Aberystwyth and the plan was to take everything out of the leaky tank, move it into this 2nd hand tank temporarily. Then once we had redecorated the office we would have room to set up the brand new aquarium in place of the leaky one and move everything back.

It was going to be a lot of work but it had to be done and hopefully there would be very few if any casualties as far as fish and plants were concerned.

The first job after siphoning out some water was to remove all of the plants. With such a heavily planted tank there was no way I’d be able to catch any of the fish without first removing the plants. This is what it looked like before I did anything to it. It was a little overgrown as it had been running wild since the tank developed a leak. 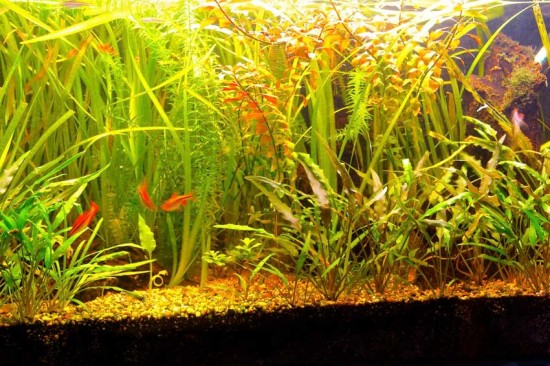 End of and Era – Before the Move

The plants were duly removed and placed in buckets, and then the fish were netted and placed in the buckets too. Some of the fish were a little difficult to catch, especially seeing as the water was now a dark brown mess so I ended up using some plastic chopping boards to section off areas of the tank to corner the fish before catching them. Once caught, they were placed in the buckets along with the plants and most of the aquarium water. I also discovered a tiny baby guppy that I didn’t know we had. 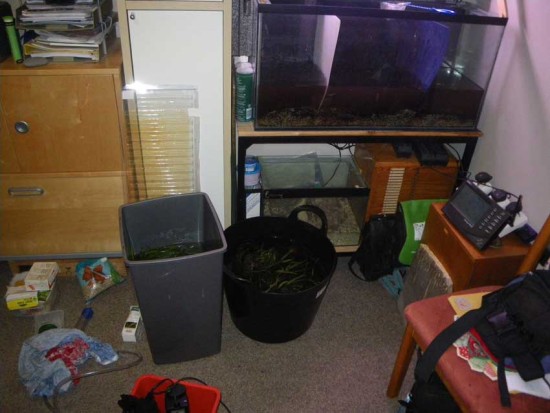 As I was going to be putting the fish straight back into a new tank, I wanted to save as much of the conditioned water as possible. Putting them into fresh tap-water wouldn’t be good for the fish. The water, and especially the gravel substrate contain huge populations of bacteria that breakdown toxins in the water and act as the primary source of biological filtration in the tank. The gravel however was quite mucky, so although rinsing it through with chlorinated tap-water was likely to kill off much of this essential bacteria, it had to be done. By now, there was chaos in the office, but my next job was to remove all of the gravel into yet another bucket and then sit outside in the freezing cold, rinsing it all through. 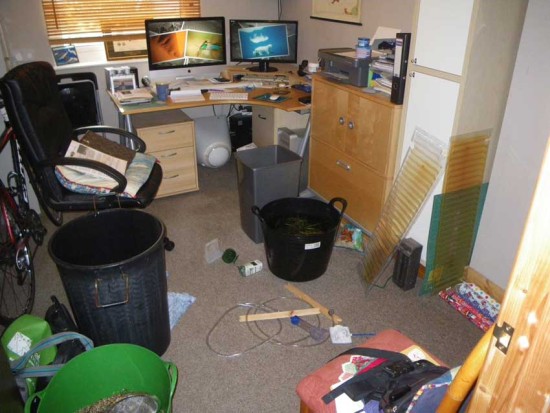 Chaos in my Office

The leaky tank was now finally empty and could be loaded into the car for a trip to the tip. The stand that it was now accessible and ready for clearing off and cleaning.

We had decided to temporarily place all of the fish, plants and other aquarium fixtures and fittings into the 2nd hand tank I had bought and to set it up in the ‘beach-room’. It would be out of the way here, allowing us to re-decorate the office. This of course meant moving a few things around in the beach-room to make some space. Aquariums take up more room than you think, but it would only be for a few weeks so we’d have to put up with a cramped beach-room for a bit. My turbo trainer was moved into the middle of the room and the aquarium stand put up in its place.

I then cleaned the 2nd hand tank and with some help from Anna man-handled it into place on the stand. The freshly washed gravel was placed into the tank and the process of setting it back up began. 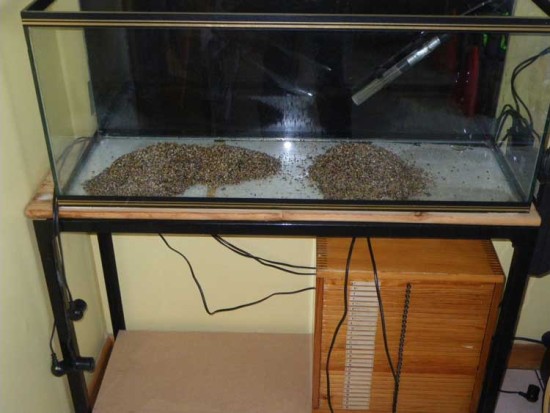 Once the gravel was in, the bogwood was arranged and then I moved the buckets of water containing the fish and plants into the beach-room ready for re-introduction to the tank. At least, that was the plan, but buckets of water this size are extremely heavy and with Anna and Morgan now out for the afternoon I had to decant some of the water into smaller buckets first. This did at least mean that I could lift these smaller buckets high enough to pour the water into the new tank. Once it was part full I started on the plants. There had been some luxuriant growth in the tank previously so I discarded about half of the plants, but replanted many of the healthier looking specimens. This is the fun bit, aqua-scaping a tank and trying to create a nice, natural looking environment that looks good to us and will provide a suitable home for the fish.

Once this was done it was time to catch the fish again and put them into the new tank. This was easier said than done. They were difficult enough to catch from the old tank, but trying to fish them out of a round bucket is more difficult as you can’t corner them. Nor can you see anything if the bucket is black. In the end I had no option but to simply pour some of them into the tank along with the last bits of water in the buckets.

Eventually the gravel, plants, water and fish from the old tank were now in a new tank in the beach-room. All that was left was to install the heater, filter and lights and let things settle down. 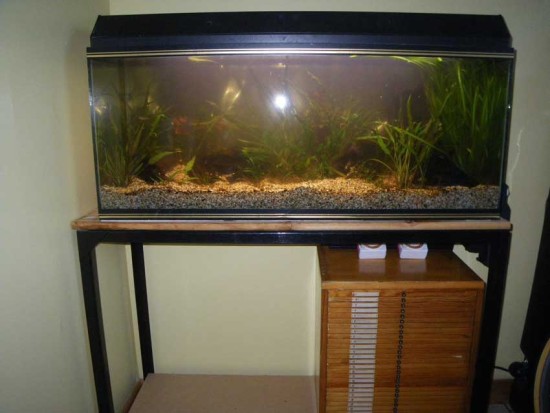 The filter wouldn’t fire back up at first. I took it apart, cleaned it all and put it back together again but that didn’t work. I changed the fuse in the plug but still no joy. I thought that the expense may grow as I’d have to buy a new filter for the tank, but in the end I cut the plug off and put a new one on and for some reason that fixed it. I don’t even know what prompted me to do that but it worked, even if the filter was a little noisier than it used to be.

Next I spent ages re-arranging the beach-room to fit things in as best I could. I had a good idea with the turbo trainer that allows me to store it vertically but simply lower it down for use. Thanks to this and a few other storage idea somehow I had the beach-room not only re-arranged and ready for use as a home gym, but it seemed more spacious than before despite now having an additional fishtank in the corner.

It didn’t take long for the water to clear and the fish seemed quite settled in no time. Now, I’ve mentioned several times that this was only a temporary solution. The next stage of the game will be to decorate the office, set up the brand new aquarium and cabinet in the office and then move all of the gravel, water, fish and plants back again. Yet another weekend of work.

A Change of Plan

However, I may have changed the plan. The aquarium in the beach-room actually looks quite nice. It’s all up and running and thanks to my re-arranging in there it is still a useable room, just one with an aquarium in the corner. So far there have been no casualties to fish or plants in the beach-room tank which is a good thing. I’ll let it settle down before making a few final adjustments to the layout and may just keep it here.

The brand new aquarium that will be arriving today should have everything needed to set it up. It comes with its own, filter, lighting and heating so there’s no reason why I can’t set that up and leave the one in the beach-room where it is. It will add some expense as I’ll have to buy new substrate, some new tank furnishings such as bogwood or rocks and of course new plants and fish. It’ll also mean that we are running two tanks in the house which will add a little to electricity consumption, but it’ll save having to move everything again and it means I’ll be able to start from scratch and maybe have a different style of tank with some different fish.

With this in mind I’ve been trying to get some inspiration. I always like natural looking, planted aquariums but have been looking at some ‘landscape-style’ aquariums too. I don’t think I’ll go down this route as I imagine such a tank takes huge amounts of maintenance to keep it looking this way, but check out these landscape style aquariums. Some of them are amazing!