Christmas Eve was a nice quiet one. The house was cleaned and ready for Santa, but there wasn;t much to do as far as that was concerned as we’d been getting on top of most things anyway. That meant we had a fairly quiet day. After a quick little spin on the turbo trainer I headed off to the beach for a windsurf – The first one for ages and it was good to see Michelle out there kitesurfing too. Anna and Morgan came to the beach for a walk and then we all relaxed together, waiting for the big day.

We had a lovely day on Christmas Day. Morgan was excited as usual and woke up at around 4.20am – Just after I’d fallen to sleep. Santa had been and there was a sticking at the bottom of his bed stuffed full of presents so he opened these and we all tried to get back to sleep for a while. Morgan succeeded until 7am, Anna and I didn’t!

So, up we got for breakfast and a coffee and to open the presents. Santa had left a note saying that he had only just managed to find Morgan who was sleeping in the ‘glass house’ rather than his own bed and that he’d taken some of the cake decorations left for him home as a treat for the elves. There were loads of presents under the tree and Morgan couldn’t wait to get started on them, so much so that he almost got a little grumpy when I said I was going to warm the croissants up in the oven rather than the microwave. He thought they were going to take ages and we’d have to wait for them!

Presents under the tree

We were soon opening presents though and had fun doing so. Morgan had loads of course, Lego, a unicycle, cycling clothes and gadgets, toys, books, games and plenty of other things including a new breed of hexbugs that can now climb vertical tubes! He even had a feather duster!

Anna and I had lots of pots and pans for the kitchen. After being given a free one a while back from the Raymond Blanc range by John Lewis we decided we wanted more like it so now have an almost full range. Anna also had some nice clothes and a nice bright insulated jacket from me, along with plenty of smellies, books and others bits and bobs.

I had a vicious looking rumble roller and a balance board, coffee, chocolates, some old fashioned sweets including some sweet tobacco – remember that? – and even some ‘bear claw’ meat pullers. The pots and pans were mine too of course, but Anna got to use them first as she was soon off and cooking dinner.

Dinner was delicious even without the red cabbage – which was due to a worldwide shortage of the purple vegetable it would seem – we certainly couldn’t find any. Anna did get two hats in her cracker though! We managed to squeeze in some pudding afterwards before we all had a game of ‘Pointless’ which Santa had left for us all. We then lazed around, watched ‘Chitty Chitty Bang Bang’ and had a snooze, built some lego, built the unicycle and played with our various toys before deciding that it was time to squeeze in a little more food. I also ate loads of sweets as well. 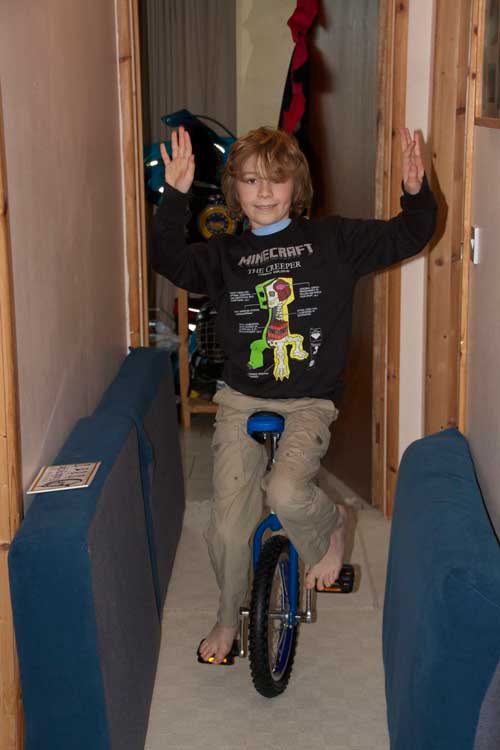 The padding in the hall in the photo above isn’t for Morgan’s sake by the way, it’s to protect the house!

Morgan fought off tiredness to stay up quite late again, and we all headed off to sleep after a lovely family day at home – We will have to make an effort to get outside for a little bit on Boxing Day I think though.