Time for a Swarm?

Just a quick update on our bees now that Summer is on it’s way.

We currently have two colonies, Leri and Clettwr and both seem to have made it through the winter. Our plan this year – if you can make ‘plans’ when beekeeping is to make increase. That’s to say we want to split the colonies so that we end up with 4 by the end of the year. We will then keep some of these in out apiaries so as to give us a little bit more of a chance of getting through subsequent winters with them. With a few more hives we should be able to suffer some losses but hopefully not lose everything eagain. That’s never guaranteed of course and splitting colonies does of course halve their numbers and therefore weakens them. This means that ideally we would do this early in the season so that the bees have plenty of time to raise a new queen and build up their numbers, stores and strength ready for the winter.

The bees may of course have other ideas, but splitting the colony is usually done by waiting for them to swarm in early summer and then using the swarm to create a new colony. The ideal way is by performing and artificial swarm just before the bees themselves actually swarm. If you miss this you can catch the swarm once it leaves the hive, but the latter method is a little hit and miss and more often then not the swarm gets away. We have therefore been vigilantly inspecting our bees looking for signs of swarming so that we can perform an artificial swarm at just the right time.

This was the strongest of the colonies coming out of winter and has been doing well. All of the literature on beekeeping says that bees swarm when they start running out of room in their hive. This isn’t entirely true as in years past ours have all swarmed even when they had loads of room in the hive. With 11 brood frames in the brood box I don’t think we’ve ever (until now) had the bees covering more than 6 or 7 of them and still they have swarmed several times in a year. I think they swarm whenever they can, maybe just in an attempt to move location to somewhere better than Ynyslas. Somewhere less windy and with more forage. 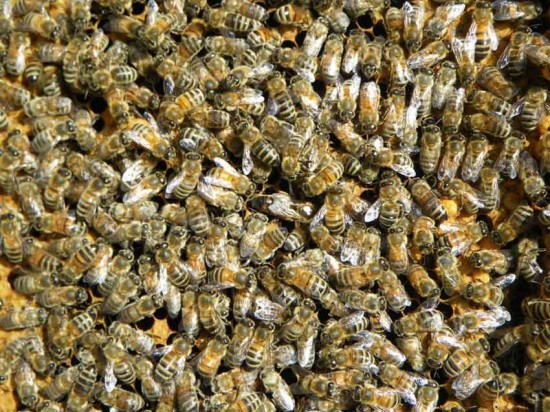 This year things are a little different in Leri. They have been really strong and have been covering around 9-10 frames with about 8 of those full of eggs and brood. There’s barely any room for stores and the hive seems to have been bursting with bees for weeks now. However, there is still no sign of swarming. The number of drones in the colony is finally increasing though which can be the first signs, but there are still no queen cells which is when swarming is really beginning to get underway.

We’re fed up of waiting now though so plan to inspect again on Monday and split them whether or not they have queen cells. We want to give them all of the summer to increase in strength and collect stores for the winter afterall. The plan will be to remove a few frames with eggs into a new hive, along with a couple of frames of pollen and honey, shake in a few nurse bees and then move that new colony to a new location. The hope will be that the bees in this now queenless colony will be able to use the eggs in the frames to create an emergency queen cell from which to raise a new queen. The queen from the original hive will remain where she is but with a depleted colony. Hopefully that will lessen the urge for them to swarm and we will end up with two colonies from the one we had before. It’ll take a few weeks for the queen to hatch in the new colony so it’ll be a fraught time but fingers crossed it will all work out OK. We have raised new queens before but seem to have trouble getting them to mate and start laying here. so hopefully moving the queenless colony to a new location will prove more fruitful.

This colony isn’t so strong and had very little in the way of stores despite the fact that we kept feeding them. We couldn’t see any signs of robbing going on, but we had out suspicions that Leri was getting so strong because bees from it were robbing stores from Clettwr. We therefore moved the hive to one of our new out apiaries a week or so ago. I went to check on them last week in their new location and they were quite out of character.

Our bees have always been really docile in the past. I’ve started inspecting them without gloves on and they rarely ever launch a full scale attack. They usually barely take any notice of us whilst we are inspecting them and the only time they get a little grumpy is when I’m mowing the lawn. Even then they just send out one or two bees to see me off. This wasn’t the case with Clettwr last week. I was only going to do a quick inspection so nearly just wore my jacket but thankfully my full bee suit came out of the box first so I put that on.

As soon as I opened the hive the bees were on the attack. I’ve never seen so many bees leave the hive, it seemed as though every single bee flew out to attack me and the noise was incredible. I stuck with it and had a quick look through the hive, but they weren’t happy with me being there so I soon closed them back up. They didn’t let up though with bees following me for quite a while. I sat there with my smoker waiting for them to calm down, but in the end had to jump into the car with my bee-suit on and not take it off until I was sure no bees had got into the car with me. 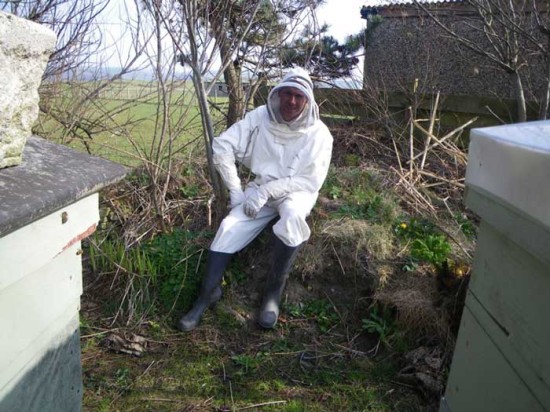 I’m not sure if they were unsettled having been moved, if it was a little too chilly for an inspection or it was something else that had upset them but they certainly weren’t happy about it. I like to think that’s it’s because the new location of their hive is much better than before and they now feel as though they have something to protect. I’m going to take a look at them again later today though, so I’m hoping they have calmed down a bit. I shall be wearing all of my protective clothing though just in case.

It’s good that beekeeping season is well underway though and nice to be making plans for the bees, even if I know full well that the bees will have plans of their own and will do what they want to do, not what we want them to do!