First Look at the Bees 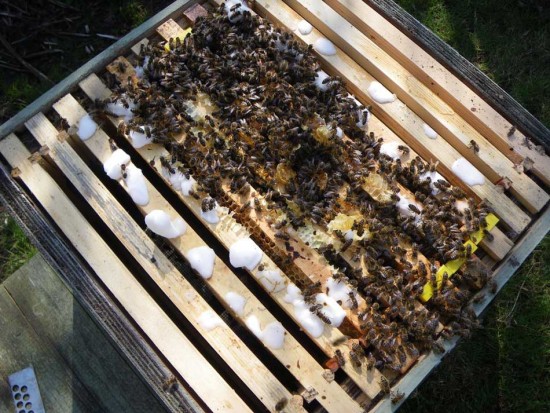 At last, the temperature made it into double figures this morning although it has dropped again now to 9.7ºC. I have loads to do in the garden and just about managed to squeeze in some time out there today. The first job was to dig out the compost bins and bag up the compost ready for using as a mulch on the flower beds. I can’t mulch them yet though as I need to cut all of the deadwood back first and weed them. Maybe I’ll get around to that at the weekend? I only managed to dig out one of the compost bins so still need to do the other, but it’s nice to have made a start. The bins themselves could do with some attention as well as the wood they are made from is beginning to rot. I think rather than empty them out completely and rebuild them I might build a new set on the other side of the garden and then transfer over to using those.

The bees were quite busy while I was working on the compost bins which are right next to the hives, so I wore my bee-suit making it pretty hot work. I also had chance to have a quick look at the bees. Both hives seemed quite busy and packed full of bees, although there was still quite a bit of fondant on the frames which made looking through them a little difficult. I did have a proper look at one of the hives until I saw eggs which as always a good sign. Once I’d seen the eggs I closed up the hive and gave them some sugar syrup. I didn’t look through the second hive just fed them with some sugar syrup as it’s still fairly chilly out there so I didn’t want to disturb them too much. It’ll soon be full-on beekeeping weather again soon though so time to get things ready and start making some proper, more frequent inspections and feeding.