Bank Holiday Monday proved to be perfect weather for beekeeping. Fortunate really as we needed to check on the status of our bees following the recent manipulations. It was sunny, warm(ish) at around 16°C and not too windy.

First on the list were the two hives in the apiary at the bottom of the garden. So, after a quick bike ride in the morning Morgan and I fired up the smoker and we all donned our bee-suits. Anna and I are taking the WBKA Basic Bee-Keeping Assessment later in the year, and Morgan is taking the Junior assessment so we’re trying to encourage him to be a little more confident with it all, and that includes tasks such as lighting the smoker. We’ve also let him adopt one of our hives that is becoming his hive. The plan is that he will inspect this hive himself, make some of the decisions about what we do with the hive and of course keep the records for the hive and a diary for his assessment.

We started with our newest colony though, a small colony in a hive we’ve called Dyfi. 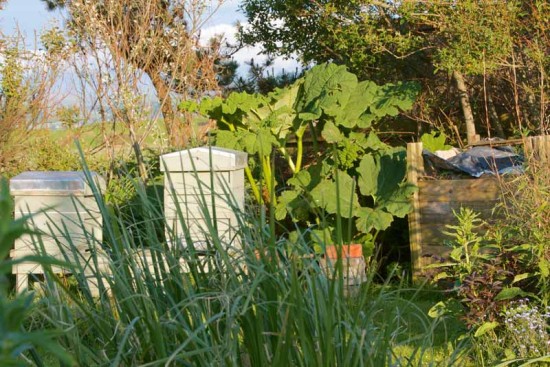 Hives in the garden

This is a new hive that we set up last week with a small nuc that we obtained from a fellow beekeeper. The nuc only cost us £30, but is quite small so we just wanted to have our first proper look at it today. All seemed well, we saw the queen, some eggs and larvae and a small amount in the way of pollen and honey stores. It is quite a weak colony at the moment though so we decided to feed it with sugar syrup to hopefully help it build up over the summer. The bees seem to be doing what they should be doing and the colony has settled in well to it’s new home. Ynyslas might not be the best of places to build up a weak colony so we will keep a close eye on it over the next few weeks.

This is the hive that Morgan has adopted. Before we inspected it contained the product of an artificial swarm we performed last week. This half of the split had the original queen, two frames of brood, all of the flying bees and the honey stores. Performing an artificial swarm is supposed to prevent swarming but  I was convinced that the colony was still swarmy so wanted to check it carefully for queen cells or other signs of swarming.

Sure enough, as Morgan went through the hive frame by frame there were several formative queen cups on a couple of the frames, many of which had larave and royal jelly in them. He only had about 5 or 6 frames to check, but that showed that they had built up a little since last week already as they only started with 3. The trouble was they were still thinking of swarming and with only a few full frames of bees there just weren’t enough bees in there for us to split them again. Similarly we didn’t want them to swarm on their own as there weren’t really enough bees to lose a swarm either. Morgan didn’t manage to spot the queen, so once he had been through the hive I had a quick look too and soon found her.

We weren’t sure of the exact age of the queen, but she was at least 2 years old, maybe more so we were planning on replacing her next year anyway. We hatched an evil plan. An unorthodox plan at that and not one we’ve ever seen documented elsewhere, but with little choice we decided to cull the queen and let them raise a new one from the queen cells. The idea here is that without a queen they won’t be able to swarm, and by the time a new one has hatched, mated and started laying their swarming urges will have subsided. It’s quite a risk of course as we have made the colony queenless, but it might just work.

We do have some concerns though. First of all it simply didn’t feel right killing the queen. Secondly, no-one else ever does this, and there must be a reason for that as it would seem as though it could be a good method of swarm control, and thirdly the bees will no doubt have their own ideas whatever we do!

Time will tell if we’ve done the right thing tough. We’ll check later in the week that they have built some decent queen cells and if they have we’ll leave them for a few weeks to allow the queen to hatch, mate and start laying. If  that doesn’t happen then we’ll have to try introducing a new mated queen, but hopefully, fingers crossed they’ll be able to raise a new one on their own.

No doubt some more experienced beekeepers will now point out why this won’t work, but with too few bees to split the colony and swarmy bees we didn’t know what else to do.

With the bees at our house inspected it was time to take a look at the colony we have in our out-apiary in Llandre. This colony had been moved here a few weeks ago. Before we moved it, the colony had been fairly weak and had lovely, docile friendly bees. Since moving it though the bees had become really aggressive. On my past two inspections they had been buzzing, stingy monsters, so much so that I’d been unable to do a proper inspection. I was hoping they had calmed down a little now as I was planning on splitting the colony if there were enough bees. Also, the owner of the garden in which they are sited (a friend called John) wanted a look so I loaned him a suit and warned him that they had been pretty nasty lately.

Anna and Morgan watched on from the car.

Thankfully they were fine today and were doing really well. The brood box was pretty much full with loads of brood, there was plenty of pollen coming in and there was even some honey in the super. Just what I wanted to see. The hive was full of bees and there were bees everywhere in the garden too. The Escallonia was covered in them, as was the Cotoneastar and John and his wife had noticed the increased number of bees and were loving the buzz of them in the garden.

With swarm season upon us I was expected these to swarm soon so wanted to perform a pre-emptive split. Leaving them until they actually start building queen cells and then performing an artificial swarm as the books instruct doesn’t seem to work for us. It works as far as making increase goes but just simply doesn’t seem to stop the swarming urges of the bees with the queen. Once they’ve started building queen cells, they continue to build them and want to swarm even after the split when they are now part of a small colony with loads of room for expansion. This is exactly what has happened in Leri which led us to cull the queen as mentioned above.

My plan here therefore was to split them before they got the urge to swarm and hopefully the pre-emptive split would prevent swarming.

It took a while to find the queen but I found her eventually and then performed an artificial swarm in the usual fashion. We now have two colonies in Llandre, one containing the original queen, a couple of fames of brood, all of the flying bees and the stores. This is in the original position in the apiary. Next to it we have a new hive with a new colony containing most of the brood and nurse bees from the original colony.We also fed this new colony with some sugar syrup as they have very few stores and no flying bees to collect any either.  There were a few queen cups on the brood frames in the new colony, but none of them had royal jelly in them. Hopefully they’ll rectify this and build them into proper queen cells, or will create some emergency queen cells from the eggs present in the frames so that they can raise a new queen. I’ll check on them in a few days time to check that this is indeed the case adn then, as with our other queenless colonies, will leave them for 3-4 weeks to allow the queen to hatch out, mate and start laying.

So, that’s 3 queenless colonies that we have at the moment, and two with queens, one of which is quite a weak colony from a nuc. Things never go to plan when beekeeping, but if they do we’ll end up with 5 strong, helathy and productive hives and will even get some honey. If not, all could be lost!