Sorry for the lack of posts here recently, but I was busy working all week last week, invigilating exams at the university, so fitting that in with everything else didn’t leave much time for blogging. It also meant that we didn’t really do much other than the normal routine.

A Week of Training Tired

I did manage to fit in most of my training though, which started last Sunday with a training day in Machynlleth. This was supposed to kick start my training off thanks to a swim with some video analysis, an 80 minute turbo trainer session and a hilly run. It all went well and did set me up for the week, even if I am still feeling fairly fat. I was quite tired in a number of session through the week though, mainly due to the early mornings, late nights and trying to cram everything in I think rather than any real physical fatigue from the training.

We were fairly busy all weekend as well. I hadn’t managed to do any training on Friday due to work commitments so had a bike ride and a run to do. As usual for this time of year I did the ride indoors on my turbo trainer thanks to a TrainerRoad workout called Ragged. It was actually quite a hard ride consisting of 5 zero-recovery, 14-minute steps from 60-100% FTP. As is often the case with such workouts I was feeling it buy the 2nd interval and thinking that there would be no chance that I complete it. But, after 80 minutes in the saddle I was done and I had hit the targets throughout. 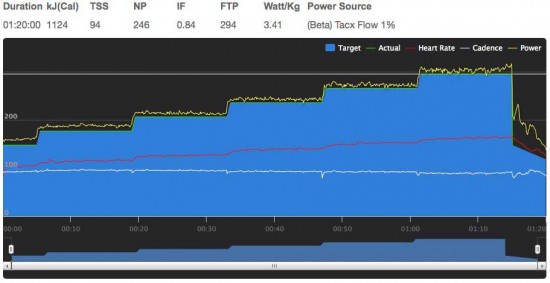 I then had a 40 minute run to do but after a long week and a hard turbo trainer session I was feeling pretty tired and it ended up being one of my slowest runs ever.

Sunday was another busy day as well. It started early as usual with a run from Machynlleth. I was out on my own in the early morning darkness, armed with my head torch as a guide around a nice hilly trail run. It was pretty damp and soggy underfoot in the hills and I fell over a few times when not quite spotting boggy areas in the dim light, but it was a good long run with some lovely scenery. The views from the top with the mist in the valleys and the lights of Machynlleth just shining through it were amazing. It was pretty much a long slog up to the top, followed by a long descent and then some flat running tagged onto the end to make it up to a 1 hour 15 minute run, covering just over 9 miles.

Next up was a swim in the pool. It felt really warm when I got in and I thought it was going to be a horrible slog in hot water which always feels as though you are swimming through treacle, but I think it cooled down and I acclimatised to it so I was feeling OK by the time I’d finished my warm up and drills set. It was then into lots of 100m reps, holding 1:30 for all of them with 15 seconds rest and the occasional flat out effort.

I had deserved my bacon sandwich and coffee by the end of it, but still had a bike ride to do.

I haven’t been out in the real world on my bike for ages (since Septmeber I think), but had arranged to meet Gary for a ride. He was leaving Borth at midday so I wrapped up warm, prepped my bike which isn’t working too well and set off from Mach at 11:30 to meet him. I wasn’t feeling great on the bike. My legs were a little heavy from the hard session yesterday and the morning run and swim had taken their toll. I’m sure that my bike isn’t running too well mechanically either. The drag from the bottom bracket and free hub must be slowing me down. I hope so anyway as I wasn’t fast at all!

I made it all the way to Ynyslas before meeting Gary though, so turned around to join him and we headed back to Machynlleth and then onto Aberdovey. It was a lovely day, cool, bright and sunny with just a gentle breeze. The estuary was looking nice as we approached Aberdovey and we stopped in the cafe for coffee and cake. It’s always nice to refuel and I was in need of the energy by then, but getting going again after stopping is never easy.

We were soon on our way back though and I stopped at Machynlleth where my car was as Gary headed back to Borth. Somehow it was only a 43 mile ride. I’m sure Aberdovey and Back used to be just over 50 miles, and although I started and finished in Machynlleth not at home, I still did the section between Machynlleth and home in both directions so I’m not sure what happened to the rest of the miles.

It was good to be out on the bike in the real world though, even if I did have a bit of chaffing and some discomfort in the saddle region. The day was finished off with a big feed courtesy of a late Xmas dinner at Dave and Sarah’s.