This is actually really nice, unfortunately I don’t have a spare one to give away. The non-stick works really well, it seems to distribute heat evenly and it has a nice reassuring weight to it. You can get a lid for it, but we don’t have one which is a shame, but it seems well built and durable. The fact that it can go in the oven is quite good too. The handle is a little thin for me, but that’s just nit-picking as it is fine to use and suits Anna perfectly. 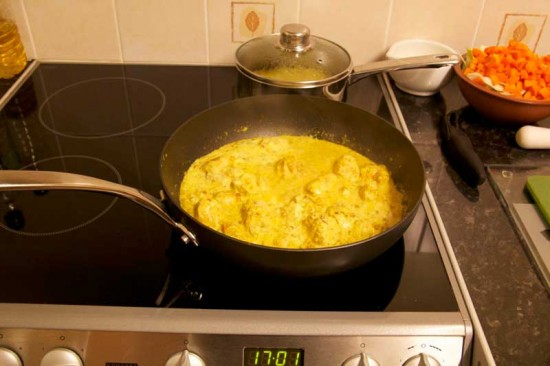 This works well, and does indeed make slicing bananas easy and provides you with slices of banana of a consistent, even thickness. It does seem a little unnecessary though as I can’t say I’ve ever had too many problems slicing bananas with a knife, or even a spoon for that matter. I usually have a banana for breakfast along with some homemade yoghurt and tend to just chop the banana up with a spoon. I guess it has a use when you need nice even slices of banana for decorating a cake with but otherwise I think it’ll sit at the back of the cutlery drawer most of the time. It’s a fun little gift for those cake bakers who have everything though.

I wasn’t particularly impressed with this. It was easy to use and chopped both my garlic and ginger perfectly well, but you can’t fit much into it and extracting the garlic from it afterwards wasn’t that easy. Garlic is a little sticky once chopped and therefore sticks to the sides, lid and blades making it difficult to get out. Ginger was a little easier but you could fit so little in it that it took several rounds of chopping to get the amount I needed for my recipe last night – A delicious chicken passanda and a dry curry of cabbage, carrot and coconut, both courtesy of Rick Steins India cookbook that I received for my birthday recently.

You also have to peel the garlic before putting it into the garlic zoom, by which time you may as well just chop it with a knife anyway. I find a garlic press much more convenient as they will peel and chop your garlic all with one simple motion. The garliczoom may look funky but I don’t think it is particularly useful.

This works well and Morgan certainly enjoys using it. He likes the fact that he gets to eat the nicely sliced apple flesh, Anna gets the peel to eat and I get the core to eat! It certainly peels and cores the apple with ease at the moment and is pretty easy to rinse off afterwards as well. The inbuilt suction cup is a good idea too. It doesn’t actually seem to slice the apple though, instead it produces a nice spiral corkscrew effect, kind of turning the apple into a slinky. It dopes tend to break up into slices as you pull it apart concertina fashion though, so you do end up with slices I suppose.

The apple peeler, corer and slicer works well and may end up having a permanent place in our kitchen. It isn’t the prettiest of things though and is quite large from a storage point of view. I think Morgan will only use it if it is out rather than put away in a cupboard, and I’m not so sure that we want it out all of the time. 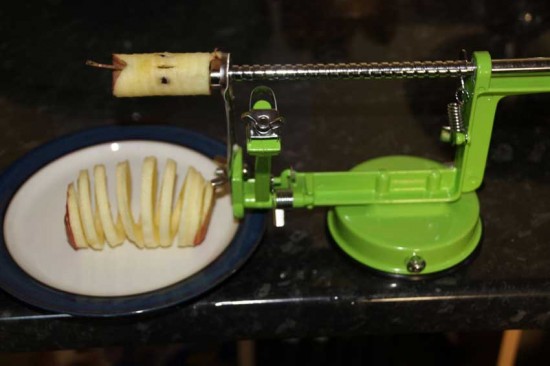 I can’t complain seeing as I got them all for free, but as with many kitchen gadgets, its often easier just to do things by hand the tried and tested way using a knife and a chopping board. Don’t get me wrong, they are fun to have and do have their uses, but there’s only so many gadgets a person can own. Finding room in the cupboards for all of them is an issue, so pick wisely and only buy those that you will use regularly. The Raymond Blanc Skillet however is certainly worth buying. I wouldn’t class this as a ‘gadget’ as it is simply a large non-stick frying pan that doesn’t claim to revolutionise the way you do anything. It’s a must-have item of cookware rather than a kitchen gadget. It is however good quality and much nicer then the old stainless steel sautÃ© pan we had been using for such tasks. The chicken passanda that I cooked in it last night was very nice indeed!

Don’t forget, if you want to try these kitchen gadgets out for yourself then check out my Free Kitchen Gadget Giveaway and you could well win one… At the moment all you need to do is post a comment on the post and you are almost guaranteed to get something!