All my blog posts about cooking and cake recipes seem to have been getting some attention. I was emailed the other day by a marketing company working on behalf of John Lewis asking if I would like to receive some free cookware from their range to test and review. It all seemed quite interesting to me and who can say no to free kitchen gadgets?

The gadgets have just arrived. I haven’t tried them all out yet but I will do over the next few days and will write my reviews here. Better still, there are doubles of some of the products so I shall do some giveaways to readers of our blog as well. 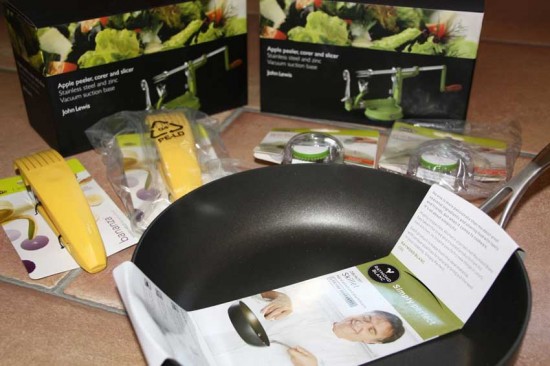 The Raymond Blanc skillet looks really nice. We’ve been wanting some new non-stick pans and as coincidence would have it, were actually looking at them the other day in John Lewis. Funds didn’t allow us to buy any though, so this one could well come in useful. It’s pretty large, non-stick and is both dishwasher and oven safe. We generally use large pans such as this for creating meals such as curries and chilli con carne and currently use a large sautÃ© pan which is getting a little old. They allow us to sear the meat, fry up the veggies and simmer the sauce all in one pan so keeping washing up to a minimum. It didn’t come with a lid which is a shame and our largest lid isn’t quite big enough to cover it but I shall put it through its paces soon.

I’ve given the Apple Peeler a quick trial and it certainly does the job. It was easy to use, peeled, cored and sliced my apple and made a pretty good job of it to. I generally eat apples with the skin on them and quite often eat the core as well, but Morgan is quite fussy and always wants his apples peeled, cored and chopped so it will be quite useful for him. It’s certainly easier and quicker than doing it by hand and the end result is quite pretty too. I think Morgan will enjoy it. Who knows, he may even prepare the apples himself with it.

The Garliczoom looks quite funky. I’ve always chopped garlic by hand or used a garlic press, but this looks a little different. It’s kind of like a hand propelled blender really. You pop the garlic (or ginger) into the container then roll it along a kitchen surface. Doing so moves the blades inside the chopper which chop up your garlic or ginger. It’s dishwasher safe too which is always a bonus.

The Bananza is a hand held banana slicer. Again it’s dishwasher safe and looks like fun to use, especially for children. I can’t say that I’ve ever really had problems slicing bananas, but this will at least produce slices of uniform thickness which could be useful when slicing bananas to decorate the tops of desserts such as banofee pies.

I’ll let you know how well they perform once I’ve used them and washed them in the dishwasher a few times, and I’ll do a kitchen gadget giveaway here on the weblog soon… Keep an eye out for how to get your hands on these cool kitchen gadgets