What better way to start the day than a hill-reps induced endorphin rush!

A 50 minute hilly run was on the training plan and seeing as it is a 20 minute run to the nearest hills I usually drive to the foot of them and run from Borth. My car is in the garage being repaired (hopefully) so I had to use Anna’s car which meant that an early run was the order of the day so that I could get her car back to her in time for her to head off to work. So, after a little bit of work on the computer I drove into Borth and headed off into the hills on my run.

These are the hills I was headed for – As you can see it’s fairly flat around here until you get to them. 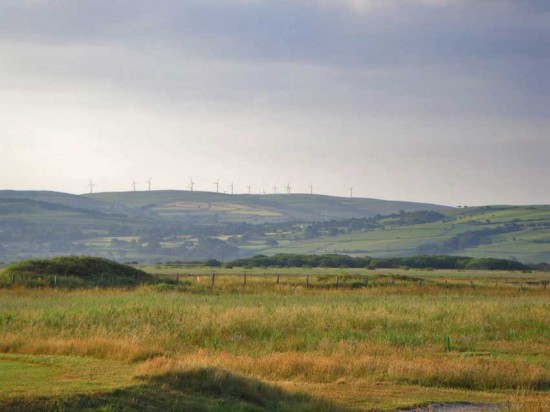 It was once again a glorious day, the sun was shining, the sky was blue and temperatures were already getting up towards 20°C. I start my run by the Animalarium in Borth and run up towards the church and then along the banks of the River Leri before hitting the hills. This gives me a nice 10 minute warm up as I run through the long grass along the riverside and then up into the hills.

I then did 4x 2 minute hill reps which were pretty hard before continuing up over the hill towards the radio mast which affords some spectacular views over the flat expanse of Borth Bog below. The rest of the run was a hilly affair taking me around the country lanes above Borth Bog, past a couple of apiaries before dropping back down to the banks of the Leri for an easy jog home.

I was back at home before 8am so Anna and Morgan could have the car to head off to work and school. I then showered, stretched, foam rolled and did my chores before settling down to work. It turned out to be quite a productive day work-wise as well. I got loads done and almost finished off a website. I sent the work-in-progres to my clients and they seemed impressed. Their response was:

Alan its looking great, were all here together now looking at it and we’re really, really pleased. So very excited now to get it finished.

Thank you so much,

It’s always good when my clients are happy, so I decided to treat myself to a nice little bike ride to top up my tan in the later afternoon sunshine. Actually, it had clouded over quite a bit so wasn’t that sunny but it was still a nice little spin.

Anna and Morgan arrived home just after I did and just in time for a delicious banana curry for dinner followed by doughnuts and some birthday before we sat down to watch the Tour de France highlights and chilled on the sofa with some tortillas and dips.