Part of Saturdays activities included a visit to Penparcau Summer Fete as Anna was plying in the Sliver Band there.

It was a glorious day for a fete, clear blue skies, warm with just a light cooling breeze and there was plenty going on. The band was playing, there were competitions and stalls all around the field, fancy dress competitions, Zumba, Historic Re-enactments, football competitions, ice-creams, sweets, cycling competitions and much much more. 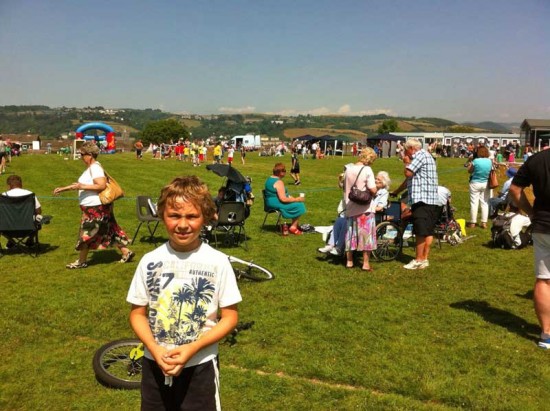 Morgan and I chilled whilst Anna played. We had a look around the stalls but there wasn’t actually that much that Morgan either wanted to buy or do so we sat on the grass listening to the band and eating sweets and cakes. We bumped into a few people we knew and had a chat too.

Morgan wanted to have go on the bikes but wanted to wait for Anna as well. We did of course know the people running the bike course as they were promoting the West Wales Cycle Racing Club – A cycling clubs aimed at children and getting them into racing. Morgan would like to go really, but it’s on a Friday evening in Aberystwyth and we just can’t fit it in what with Cubs and Scouts too.

He did have a go around the times course though, his first ever ride on a road bike and did pretty well. He completed the course in 53 seconds, Only 5 seconds off the leader in his age-group which of course meant he wanted another go. He paid another 50p jumped on the bike and prepared to ‘give it some’. I could tell he was going to try to hard so told him to take it easy on the tight bends, but did he listen? Nope, he flew around the bend and his front wheel slid out on the grass just as I had predicted. Never-mind, up he jumped and it was time for another go – not that he’s at all competitive!

Ready for the start

This time he was much more controlled but put some effort in on the straights as he got used to the bike and posted a time of 42 seconds, putting him in the lead by 6 seconds! He was happy with that and we could now leave. I was quite impressed with his bike-handling though, especially through the slalom where he was super-smooth.