There must be something wrong with Morgan – he didn’t want the cake mixture scrapings from the mixing bowl!! Not to worry, more for me. His tune soon changed once he got to smell the date cake cooking though and I’m not surprised as you’ve never smelt anything so nice. I’m salivating too whilst waiting for it to cool down enough to eat.

It’s another recipe from the Volcanic Kitchen cookbook that we brought back from New Zealand and judging by the smell its going to be a keeper. It’s a sticky, moist date cake with a crispy coconut treacle topping, just what we need after a busy day.

My day started last night really as at 4 am after about 5 hours of trying without success to get to sleep I gave up on the idea and got up. I blamed it on the 2 cups of Green Tea that I’d drunk yesterday as I’ve been caffeine free for a while and didn’t realise that Green Tea was caffeinated. Once it got light at around 6am I was out in the greenhouse finishing off the work we started the night before and spent a couple of hours gardening before having breakfast with Anna. It was then lots of household chores before we had some lunch and headed into Aberystwyth to drop Morgan off at a cinema birthday party.

Anna and I then did some shopping, had a free coffee from MacDonalds with chocolate chip cookies from Morrisons bakery, swapped her hire cars over, did some more shopping and collected Morgan again. Once at home I set to baking. First an Oystermouth Pie which is a traditional Welsh recipe – basically a fish pie which in my version contained haddock, salmon and boiled eggs – and then the Date Cake. The pie went down well, even with Anna who isn’t that keen on fish, but we haven;t tasted the date cake yet as we’re waiting for it to cool down. It has sunk just a little in the middle. You have to take it out of the oven just before it is cooked through and add the topping before baking it for another 10 minutes of so. The first time I took it out it wasn’t quite ready but there is only minimal sinkage and I’m sure it won’t affect the taste.

The cake itself is a rich, moist date cake just like a super sticky, sticky toffee pudding. The topping is a think layer of melted butter, brown sugar and coconut first caramelised on the stove and has then bubbled and gone treacely before setting to a crispy crumble in the oven.

UPDATE: We’ve just tasted it, served with fresh home made yoghurt and it’s tastes even better than it smells and looks. Morgan even gave it 97.5% (he’s into percents at the moment so also pointed out that that was 9 and three quarters out of ten)- High praise indeed from Morgan! 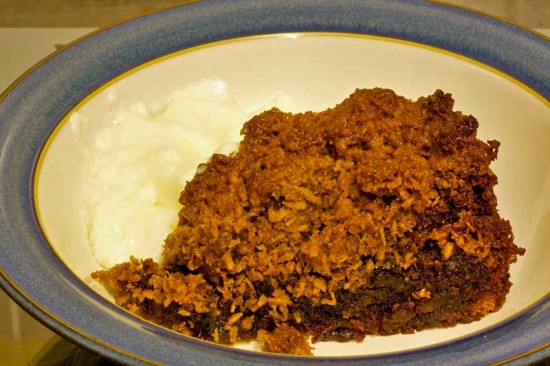