The Swarm that Got Away

Our bees made the most of the warm weather on Tuesday and decided to swarm. I was just getting ready to go out when I had a phone-call from the neighbours saying

I’m not sure what your bees are up to but they seem to be doing something, they may be swarming.

Indeed they were and they seemed to be congregating around our little oak tree. Time to make some changes to my plans and don my bee suit ready to catch them.

The bees soon settled down in the oak tree into a nice sized cluster. They wrapped themselves around the trunk so I couldn’t cut them free and instead I had to position a nuc box below them and shake them into it. They were very docile as is to be expected from a swarm, and although I had my bee suit on I’m sure I could have completed the whole process in nothing by my shorts and ‘T’-shirt. 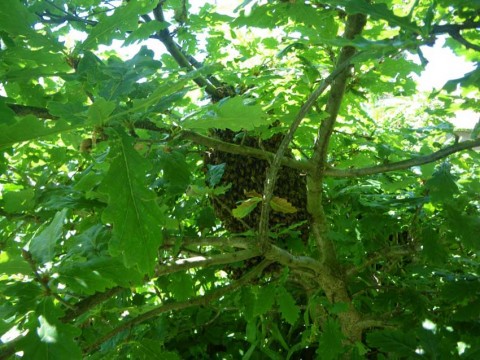 I positioned the nuc box under the tree, removed a few little branches that were in the way and then shook the bees into the box. Most of them went in, but they then started flying back up to where they were before. I tired again, and again they flew back up to the tree. I gave it a third go and this time smoked the area in the tree that they kept going to as well and that seemed to do the trick. The bees were now congregating in the nuc box where I wanted them. 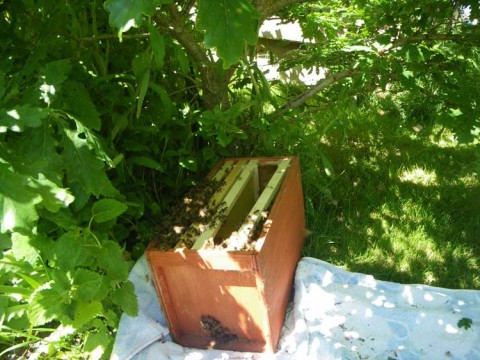 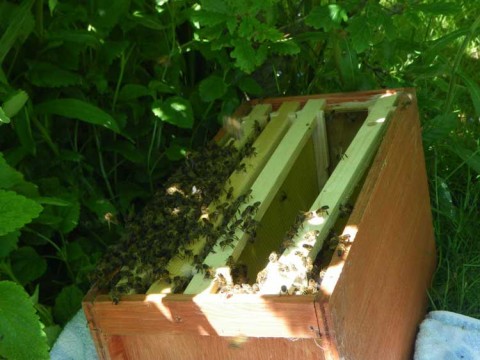 Into the Nuc Box

I scooped a few of the stragglers in and left them for a while to settle down. Once they had I was able to move the nuc box out from under the tree and put it in a more accessible location. I then put the lid on them and left them to it. Within an hour, all seemed well, the bees were coming and going from the nuc box and looked as though they had settled in nicely.

I left them overnight so that any stragglers would find their way back at dusk and then checked on them again in the morning. Trouble is, by the time morning came around there were no bees in the box. Well, that’s a lie there were some, but only about 10, not the 10,000 that were there yesterday. Ooops, I appear to have mislaid 10,000 stinging insects and their egg-laying queen. No doubt they decided that the nice cosy, safe nuc box that would have been the perfect place to start a new, successful colony wasn’t to their liking and they flew off to die in a tree somewhere instead.

Oh well, you can’t win them all and hopefully the remaining bees in the hive that they swarmed from will raise a new queen and continue the lineage.