Where are all the moths?

The second half of our night-time science experiments didn’t go so well. After the success of viewing Saturn, we put the moth trap out. I wasn’t expecting loads of moths in the trap as it has been so cold lately, but with clear, fairly dark skies, light winds and temperatures only dropping to 6°C I thought we might at least get something.

This time last year and the year before we were getting moth trap counts in the region of 10-30 moths from over 20 different species with some particularly busy nights moth-wise such as the one on May 20th 2010. Once again last night though there wasn’t a single moth in the trap. Maybe its time to change the bulb?

Things are definitely taking a while to warm up this Spring though. Looking back through the blog from last May and May 2010, things were much more advanced.

It wasn’t all good though as the garden did take a bit of a battering towards the end of May.

So far this year things are quite a way behind. The garden has quite a bit of catching up to do, we’ve barely been able to inspect the bees (although we hope to do that today), there isn’t any sign of the caterpillar nests yet, temperatures have barely reached double figures for a while and there aren’t any moths at all.

It does look as though we are going to have a nice day today though.

Come on Spring, get your act together. 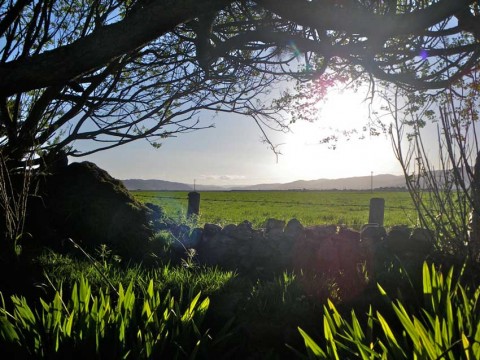 View up the Dyfi Valley this Morning