Work progressed well with our new conservatory yesterday. We’re having it built by Mid Wales Windows, who weren’t supposed to be starting until next week. They phone us up a couple of days ago asking if they could start this week so we said yes.

They arrived as promised on Wednesday morning to a perfect day for building. Cold but dry and sunny. After a quick chat and a coffee they set to work and had soon dug out a hole for the foundations. 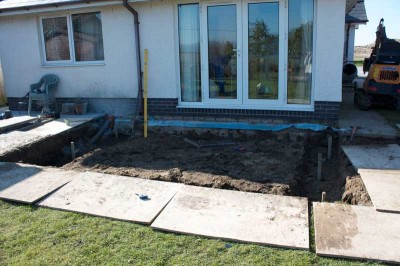 Hole for the Foundations

They worked pretty quickly and tidily, putting down boards to walk and drive on so as not to damage the lawn too much. They had to move a rain gulley a little bit which was quite a messy, noisy jon as it meant cutting through some of the concrete foundation of the house. All the sand that was dug out of the hole was loaded onto a skip that was soon taken away and replaced with a big blue concrete mixer.

It wasn’t long therefore before the concrete started to flow and the hole was filled up. 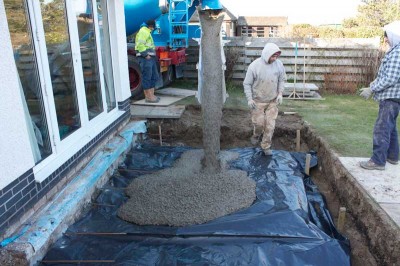 In with the Concrete

As our house is built on sand it has a raft foundation, which means it effectively sits on a large slab of reinforced concrete that can float on top of the sand. Any slight shifts in the unstable sand below means that the whole house moves rather than just part of it if it was on more traditional foundations. The new conservatory therefore needed to be on a raft foundation as well, so the entire hole that they’d dug out had to be filled with concrete and reinforced. 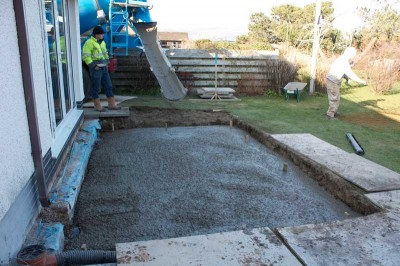 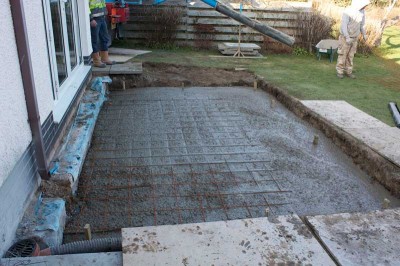 I had to leave at this stage to go to Morgan’s 6th birthday party but by the time we got back, the hole was completely full and hopefully setting ready for the guys to start work on the brickwork, which the should be starting today. So far, so good.