I was dying to get out for a MTB ride last night. I’d been at home all day without much work to do so had been willing the wind to pick up so that I could go windsurfing – It never did, so I was champing at the bit to get out and do something. At least I had a night ride to look forward to.

I got to our usual parking spot by Angler’s Retreat pretty early and as usual it was cold, windy and bleak there. Typically the wind had started to pick up properly now, just as it was getting dark. Pete and John soon arrived and after complaining about how cold it was there we headed off with the wind on our backs pushing us up towards the brow of the hill. We then headed off down ‘Al’s Descent’ (yep, it is named after me!) into Artists Valley. Just as I came to the end of the loose slaty bit at the bottom of the first section I heard a big Phhooooshhh! noise and knew immediately that I had a flat tyre.

That’s the second time I’ve done that on that section. It isn’t why the descent is named Al’s descent (that’s simply because I introduced it to our riding group), however it is now becoming my nemesis. The first time I had a flat here was the flat that finally encouraged me to go ghetto tubeless on my tyres to prevent pinch flats. That was a while a go and since then I’ve had a new bike and a new rear wheel that is tubeless ready. This means that my front wheel is ghetto tubeless still but there’s no need for the ‘ghetto’ approach on the rear wheel as I can just run it tubeless. However, don’t ask why, but for some reason my rear wheel had a tube in it.

It’s not a huge problem as I had spare tubes but I immediately assumed that I’d had another pinch flat because I wasn’t tubeless on the rear wheel. However, once I’d actually taken a look at the tyre it was clear that this was no pinch flat and certainly not something that a tubeless system would have coped with.

There was a huge 3 inch gash in the tyre from one bead right across and over the top of the tyre, almost splitting it in two. Needless to say I wasn’t going to be able to continue the ride with a tyre like that. I was going to patch it up with a tyre boot and some energy bar wrappers but Pete had a piece of toothpaste tube with him so I used that instead, put in a new tube and took it easy on the way back to the car, sticking to the fire-roads. 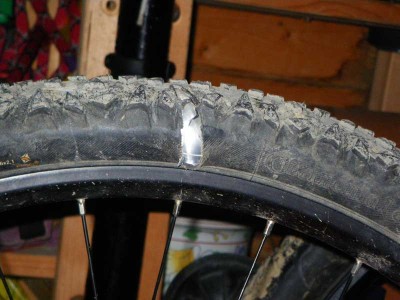 John and Pete continued down into Artists Valley on our proposed route – Although I did feel a little uncomfortable leaving them in the woods to find their own way around as Pete is new to the area so had no idea where he was and John doesn’t have the best sense of direction and never really seems to know where he is – I’m sure that’s all just for show really and no doubt they had a good ride.

My ride was only 5 miles in total, but I guess that serves me right for buying a cheap £6.99 Continental Vapour tyre. Think I’ll go with the more expensive ones with sidewall protection next time, even if they are 5 times the price. Question is, what should I get? Any recommendations?