Isle of Man Castles and Heritage

Whilst on the Isle of Man this year we visited a couple of castles and tourist attractions. The good news is that as members of the National Trust, our National Trust card is accepted in Manx national Heritage sites giving us free entry. Free is always good but it actually means we enjoy them more. If we’d paid full price for entry we should feel as though we had to stay there for half a day to get our moneys worth. At least with free entry we don’t mind popping in for and hour for a quick look around.

Our first stop as it was a sunny day was a walk around Peel Castle. Originally built by the Vikings in the 11th Century it stands on St. Michaels Isle and has been expanded and enhanced over the years. We were given recorded tour guides as we entered and listened to a few of them at certain locations but generally we just wandered around and explored for ourselves.

As well as the buildings within the castle grounds it also provides good views out over the town of Peel and its harbour.

Next stop was the House of Mannanan, also in peel. This museum traces the history of Man on the Isle of Man. As well as displays of artefacts there are various rooms with stories to listen to and videos to watch and the highlight is the full size replica of a viking longboat. Morgan is quite into Vikings at the moment so that is what we went in to see really. Once again, as a Manx Heritage site we had free entry so didn’t mind skipping many of the displays to get to the bits Morgan wanted to see. The Viking Longboat displays actually protrudes out of the front of the building too so Morgan was able to help them beach their longboat! 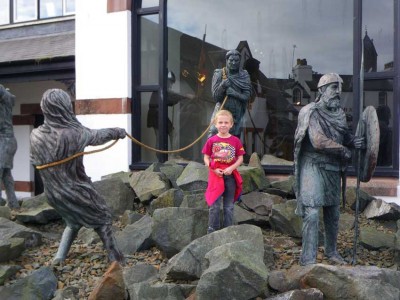 We also went to Castle Rushen, a medieval castle located in the Isle of Man’s historic capital, Castletown, not far from where we were staying with Anna’s Mum. The castle itself is very well preserved and now has a walk around it showing you how it would have been used throughout the ages.

Anna wasn’t so keen on this one though due to the heights involved. Once again though these heights provided good views out across Castletown Harbour, the town and the surrounding countryside and coast. 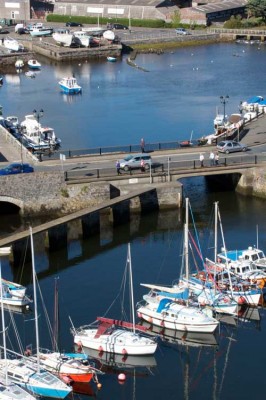