I’ve been Twittering using Tweetdeck for a while, but now that I administer several Twitter accounts (a personal account, accounts for websites I maintain and company accounts, as well as one for ‘Designing Libraries’ where I work on Monday’s and Wednesdays), it was getting used less and less and I tended to rely on Twitterfox or the Twitter website a little more.

The latest version of Tweetdeck however does provide support for multiple accounts, along with a host of other new features, so its time to see how it works. I’ve downloaded the next version and the multiple account feature seems to be working well. Just add accounts and from there on you can determine which account a particular column is associated with whenever you create a new column in Tweetdeck. 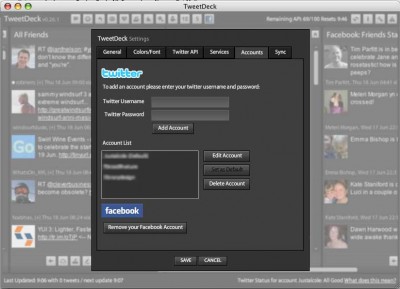 You can of course also Tweet from any of your accounts from within the normal Tweetdeck interface.

I’m still not completely convinced by the overall interface though as you can end up with loads of columns and finding your way around them can be a little confusing ang take a while. I’m really after something small and unobtrusive that will allow me to do all of this. Twitterfox is good, small, unobtrusive and allows for the management of multiple accounts, but obviously isn’t as full featured as Tweetdeck.

Some other features of Tweetdeck that I like are the ‘Mentions’ column that shows you Tweets that mention you, The ability to create ‘Groups’ so that you can easily follow friends, colleagues or other interest groups, and the synchronization with Facebook, which allows you to update your Facebook status everytime you tweet from TweetDeck. (Or choose to publish to both Facebook and Twitter or just one or the other)

Plus with a Facebook column you can stay up to date with all your friends’ status updates in TweetDeck.

I’m not completely overwhelemd with it, but now that it allows for multiple account management it may once again become my Twitter tool of choice