I had another action packed weekend here in Wales.

Now that I have a new bike, my brother Jay came to visit so that he could borrow my old bike and come out for a couple of mountain-bike rides with me. He used to be a fairly handy cyclist, racing on and off the road, but hadn’t been on a bike for a few years. I didn’t expect that to hold him back too much as it wasn’t that long ago that I hadn’t been on a bike for around 10 years, so I thought I’d know how he felt. My first ride back on a bike was around the northern half of the Syfyddrin Trail, but I thought I’d make it easy for Jay and start with the Pendam Trail on Saturday.

We started off OK, a nice easy ride along the first few bits of single track from Pendam and then up the first small climb. Jay was lagging behind and puffing and panting a bit but looked OK. Next up was another little bit of single-track followed by a short steep rocky climb. Jay lost traction on this bit and had to get off, and then at the next junction, just short of two miles into the ride he had to stop to throw-up! Nice one Jay, I think you may have lost some fitness!

In all fairness, he did get back on the bike afterwards and finished the ride, albeit at quite a slow pace. Only 6.5 miles in total, but at least he got around in one piece!

Just goes to show how quickly you can loose some fitness though.. Use it or Lose it! It doesn’t take that much to keep it though, I hadn’t been on a bike for over 10 years but obviously keep relatively fit from windsurfing, surfing, and even gardening. It took Jay 1hr 24 to get around the Pendam Trail whereas my first attempt a couple of weeks after getting back on a bike took 42 minutes. Just goes to show, you don’t need to do that much to maintain some fitness, but stop altogether and its a slippery slope. 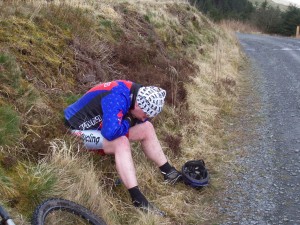