A Surf Ski instructor (Benjamin) that I met at the Mawddach Marathon messaged me a while ago about a Surf Ski Course that he was running in Fishguard, asking if I’d like to go along. I declined at first as I thought it sounded a little too basic for me but Benjamin said that it would be tailored to an individuals needs so in the end I decided to go along. It was only a couple of hours down the road after all and a weekend playing on surf skis was bound to be fun.

Saturday in Fishguard and Newport

Saturday morning therefore saw me with the camper packed ready to go and on the road to Fishguard. It was a dreary day with SW winds and drizzle. I wasn’t really sure what the plan was for the weekend but I was expecting to get wet and there was talk of a downwinder from Fishguard to Newport on Sunday. Before long 7 of us and Benjamin were sat in a cosy cafÃ© on the quay side. We had coffee and cakes and were doing the usual introductory talks.

We were quite an eclectic mix really. The others all had years of experience paddling either surf skis, sea kayaks or whitewater playboats. Most didn’t have much experience in the sea though and everyone wanted to get better. I of course was fairly new to paddling but had spent plenty of time in the sea. Benjamin has been paddling all his life it seems as has been national champ and competed at various disciplines around the world throughout his career.

After some talk about safety kit and such like we were soon kitted up for a paddle out into Fishguard Bay. This was a chance for Benjamin to see what level we were all at and for us to prove to him that we could paddle and more importantly remount our skis. Having spent the majority of my first surf ski session on my new ski doing nothing but falling off, remounting is at least one thing I’m quite good at! A few of the others did struggle a little but not to the extent that they couldn’t do it. We paddled across to Goodwick as well where there was a bit of wind to contend with.

Back on dry land and it was time for some paddling technique on the ergo. This was a one sided ergo that did tend to exaggerate peoples weaker points of their paddling technique. I’m not quite sure how much we took away from this though. Benjamin is also quite into martial arts and was big on visualisation and being in the moment. I’m sure that sort of thing works for many people and I’ve always thought I should do something along the lines of yoga or Tai Chi to make me a more rounded person. I just don’t tend to have the time to fit it in. I think I would benefit more on an ergo from some actual physical, mechanical drills that I could do to address the weaker points of my technique and to unlearn bad habits. Simply visualising it doesn’t really help me – What I think I look like and what I actually look like are often two completely different things. I think I’m doing it correctly until I actually see myself in action. Once I do see myself I know that it’s wrong and why it’s wrong but don’t necessarily know how to go about correcting it.

We then headed off to Newport beach where we paddled out to play in some waves and then paddled out to another little beach which involved a bit of a slog upwind followed by a nice run back to the beach.


We spent the evening together in an Indian restaurant eating curry and chatting about surf skiing too.

A nice night (not really) sleeping in the van while the wind howled outside and the rain fell brought us to Sunday. I went out for a coast path run in the morning as we weren’t due to meet until 10am. It was nice to be running along the coast path again as I haven’t done so for a while. It was a little dreary in the wind and rain but the views over Fishguard were nice and the out and back run was good.

A quick ‘shower’ under the hosepipe at the end of the quay and then it was time to meet up in the cafÃ© again. Today Benjamin was talking more about getting the feeling for the waves and the moods of the sea. Again, I was trying to find something useful to take away from this but I don’t think I quite clicked with his way of teaching. I agreed with what he was saying but it all seemed like common sense to me rather than anything I could use to actually improve. I guess that having spent most days of my life in or on the sea in one form or another then I’m quite familiar with it’s various moods and such things are common sense to me – I suppose that isn’t the case for everyone.

With coffee’s, cakes and flapjacks dispensed and Benjamin’s talk over with for the day it was time to leave the ski’s on the quayside and drive cars and vans to Newport. We left them there and got a lift back in just two of the cars so that we could do shuttle runs back after paddling downwind for the day.

Dowinder from Goodwick to Newport

At exactly 1pm as planned, we all left Fishguard for the short paddle across to Goodwick. There we met up with a RIB that was to be our safety cover for the day and then started our downwind run to Newport Beach. The wind had eased off quite a bit by now and the sea-state was fairly benign. It was still good fun to have the wind at our backs and a slight swell from the left hand side.

It did get a little lumpier around Dinas Head where the swell was reflecting off the headland and the back eddy from the tide was meeting the main tidal flow but it was never too bumpy. Gareth who I was buddied with for the day fell in a few times so I had to double back a number of times to make sure he was OK. This made it a little more challenging for me as sitting still or going slowly is more difficult than paddling along with the wind and swell. It did of course mean that I paddled in all directions so had times with wind and waves at all angles. In the end Gareth fell off a few too many times and couldn’t get back on so decided that a little trip around the headland in the RIB would be a good idea. He climbed aboard and I was able to paddle off enjoying the runners as we headed for Newport Beach.

By now the sun was shining and it was a lovely day. I was a little over-dressed and getting hot so whilst chatting to the others and looking around to see where the RIB was I decided to have a little swim too! Just what I needed to cool off and I was soon back on and paddling my way into the beach.


Once we were all there it was time to pack up and head off on our separate ways. First there were a few more flapjacks and chatting of course. It was surprising to find that a few of the people on the course actually knew of and sometimes visit Ynyslas so maybe they’ll catch up with me next time they are out this way so that we can go for a paddle.

A good weekend away with some nice surf ski sessions. I’m not sure how much actual tangible benefit I got from it but I’m sure I picked up one or two things along the way. It was good to do a down-winder as well, even if the conditions weren’t that extreme. It’s not really something that is that easy to organise and do on your own.

For some reason I failed to take any photos and forgot to put my GoPro on my boat, so here’s the only photo I have. The vans lined up with Surf Ski’s on them, Gareth chatting to Benjamin who is eating one of his flapjacks! 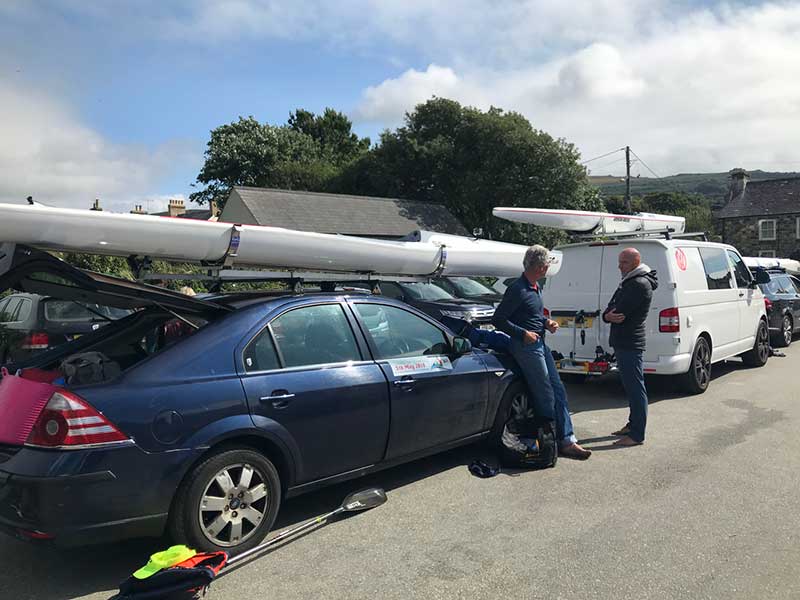