I’m all about maximising Time on the Wave (TOW). Usually TOW stands for Time on Water and you all know that I already do that. Surfing, Windsurfing, Kitesurfing, Swimming, Kayaking, Surf Skiing, Canoeing, Stand-up-Paddle boarding have all got me out on the water as much as I possibly can whatever the weather. The conditions are almost always OK for one of them, if not perfect. All on my front door too so there’s no time wasted travelling to the beach or waiting for the right conditions. The Borth & Ynsylas weather station even sends me notifications if the weather conditions reach certain parameters. With kit ready to go, loads of wetsuits so one is always dry and a work / life balance that allows for plenty of time on the sea then Time on the Water is not a problem. 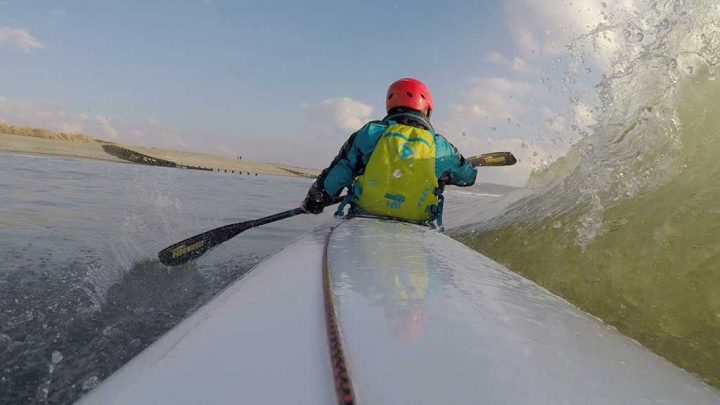 With that sorted, it’s time to maximise my time on the wave. Surfing is OK for this, but there’s a lot of time spent paddling out and sitting around waiting for waves. The waves are generally quite short around here too. Windsurfing and kitesurfing up the Time on the Wave to a certain extent. Stand-up Paddle boarding gives you the same surfing feeling but with a quicker paddle out and the ability to catch waves earlier you get more rides and longer waves. Best of all though for Time on the Wave is Surf Skiing. You can motor out through the waves. This is quite a thrill in itself as you get launched off the top of them as you paddle over the waves. Catching waves is easy and you have the ability to catch them much further out than you can on anything else so the rides go on forever.

Take yesterdays session as an example. The sun was shining but we’d been out in Chester all day.  I had a small window of time once we got back. The waves were only small but were plenty of fun and the going was easy. I was out on the water for less than an hour (56 minutes) but in that time I caught 22 waves. That’s more that one wave every 3 minutes. Most of these wave rides were around 200 yards in length, some up 250 yards. Not massive up to some of the rides I’ve been getting recently which have been around 400 yards long but not bad either considering how small the surf was. That’s a pretty good wave count if you ask me and all packed into an hour on the water. Surf skiing is certainly one way to maximise your time on the wave. Here’s a few of the fun little waves I caught.