With no Welsh Series Cyclocross race on the calendar I headed North this weekend instead of South. First stop after a drive through the rain, mist and murk was Porth Eirias in Colwyn Bay where I met up with the North Wales Surf Ski Paddlers Group.

The rain, mist and murk had lifted a bit here on the coast. Out across what looked like a fairly calm sea the 160 wind turbines the Gwynt y Mor windfarm could be seen slowly turning in the breeze. This is the second largest operational wind farm in the World, producing enough electricity to power 30% of the homes in Wales.

We soon kitted up and headed off. There was 7 of us in total; Martin, Rik, James, Ben, Jeff, Alex and myself. 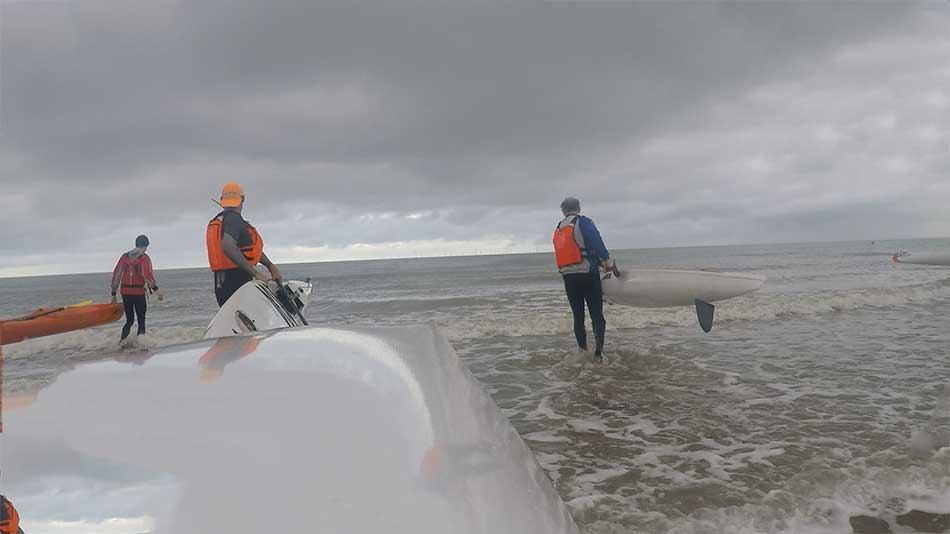 Off for a Paddle

We made our way across Colwyn Bay to the point at Rhos on Sea where there was a tiny bit of messy swell to play on. Nothing too exciting but we did a couple of out and backs to the green shipping buoy. We then headed off across the slightly choppy waters of Penrhyn Bay.

The Little Orme loomed closer and soon we were in the presence of it’s tall limestone cliffs. The sea was a little rougher here though with waves and current causing plenty of confused chop and swell in several directions. Unpredictable conditions so concentration was needed.

We’d now been paddling for a little over an hour so James decided it was time to turn around and head back. We followed our route back and were joined by a couple of seals this time. No dolphins today though like last time we paddled this route. All in all a nice relaxed 8.5 mile paddle with good company.

Back on shore it was time to pack up and then head off to Port Eirias for the 3 C’s – Coffee, Cake and a Chat. We then headed off in our separate ways vowing to do the same again sometime soon. I headed towards Llandegla via the lovely looking Nant y Garth Pass which was fiery orange with autumnal leaves.

I haven’t been to Llandegla for a few years. I did contemplate parking outside of the centre and riding in to save the parking fee but with little time before it got dark decided it would be quicker to head straight to the trail centre. It was just gone 3:30pm and the gates were due to close at 6pm so I didn’t expect them to be charging full price for parking, but that they were. It’s not cheap either at £4.50. I had little choice now though so paid the fee, parked up and headed out on my bike.

I had my full suspension Commencal Meta 5.5 with me today which I haven’t ridden for a while. The trails were wet and muddy and the mist and murk had regained a hold over North Wales. I soon got into the flow of things though and it appeared as though I had the trails to myself. The climb out from the trail centre seemed the same as it always has been. I was following the signs of the 19km red route. Once onto the single track sections though I couldn’t remember any of it. I don’t know if it has changed significantly since I rode here or if I just don’t remember it. I think the former as my Strava segments for the ride seem to suggest that this was my first time riding them. It was a good trail though with nothing too technical and some nice flowing sections.

Towards the end of the ride I started to catch and overtake people and sooner than I expected I was back at the car park. I headed into the Trail Centre to have a shower, only to find that they don’t have showers. I’m sure they used to. I was caked in mud so had to wash in water from a water bottle and then have a wet-wipe bath in the camper before I could head off.

A Brit Stop for the Night

I was staying over as I had plans in Chester the following day. I had identified a Brit Stop pub not far from Llandegla that looked perfect. The Butcher’s Arms near Nercwys was a family run country pub pretty much in the middle of nowhere with views out across open countryside. I arrived a little early for dinner so parked up in an area of the car park that looked as though it was dedicated to campers. It even had electric hookups. I sat in the van for a while reading a book as darkness fell, before heading into the pub for dinner. I checked with the landlord that it was OK to park up there for the night and soon had a lovely plate of liver and onions complete with mashed root veggies, chips, carrots, peas and gravy waiting for me on a table besides the log fire. Perfect! 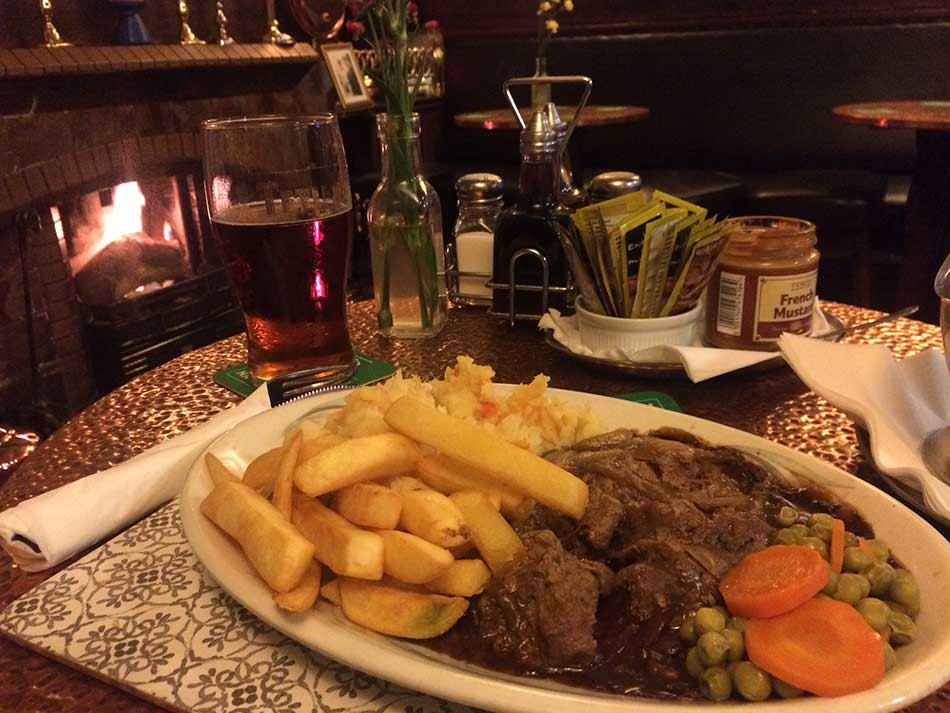 After pudding and another beer I sat there for a bit in front of the fire reading my book before heading back out to the van for the night. I could have stayed in front of the fire longer but as the only person in the pub I thought if I left maybe they could do their own thing for the evening. As I was leaving another couple came in though. 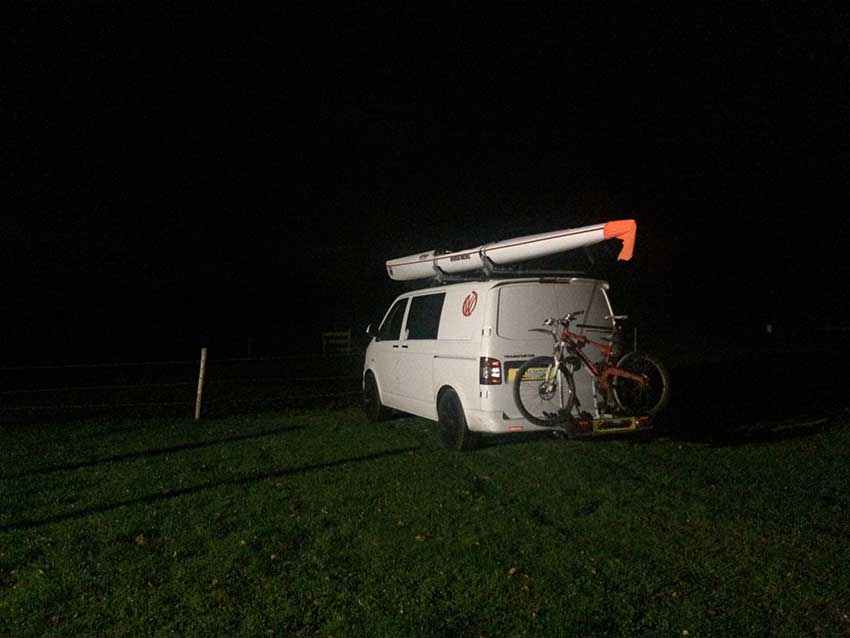 It was cold outside by now so I soon had the bed out in the van and went to sleep. I slept pretty well, despite the hammering rain on the roof and didn’t get up and out of bed (other than for a 3am wee) until 7am. It was pouring with rain, blowing a hoolie, only 4ºC and looking pretty miserable. I managed to have a coffee and pack things up without leaving the van and then headed off towards Chester. The weather was atrocious and certainly wasn’t looking particularly inviting for a morning paddling on the River Dee.

I soon found my destination in Chester. A small, discrete gateway with a ‘Chester Canoe Club’ sign on it. Once people arrived and it was open it led down a steep flight of steps to a lovely looking club house right on the banks of the River Dee. There were racks of Kayaks all around it and the building itself looked perfect for a clubhouse. Inside there were changing rooms, showers, toilets and a nice big club room with panoramic views out over the river. 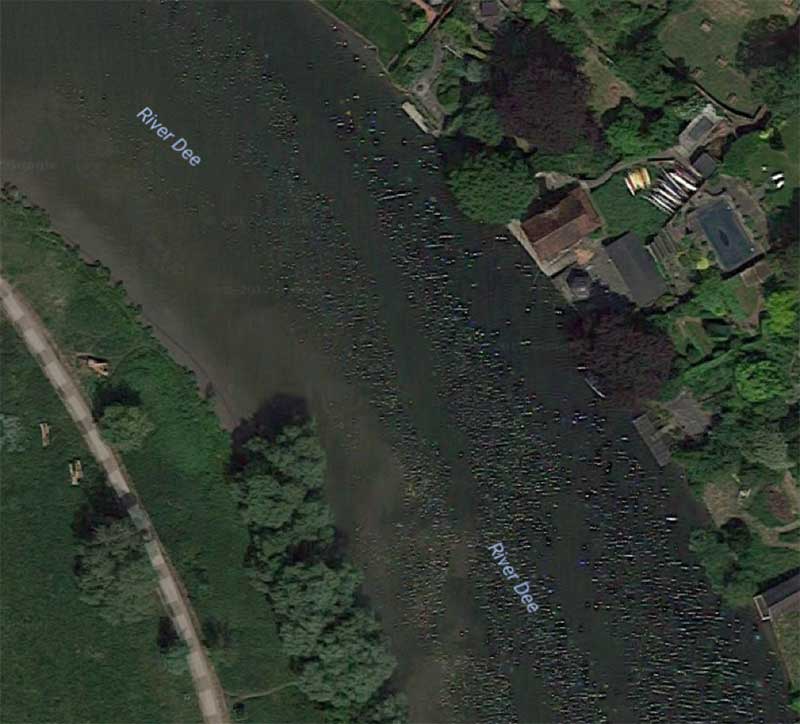 I chatted with a few people until Jean arrived and she soon sorted me out with a nice stable K1. Having never really paddled a K1 before it made sense to start in something quite stable. The conditions were quite wild too apparently so everyone was opting for the more stable options if they could. It looked quite calm to me now, but there was still a strong wind. Although the rain had cleared for a while there was still the threat with dark clouds looming overhead. The river itself looked quite sheltered but I guessed it could be more exposed outside of the town.

The plan was to head upstream to the ‘road bridge’ where we would start the race. I felt comfortable enough in my Kirton Tempest boat and paddled up alongside Simon who was in an identical boat. At the road bridge we assembled for the start. The heavens opened and the rain lashed the waters of the Dee as gusts of wind rippled its surface.

As with most time trials those likely to be slowest were set off first. Simon went off before me and then a couple of minutes later Bob and I set off together. The rain had turned to hail by now, so it was head down and get on with it. I was taking it fairly easy as I didn’t really know what to expect. We paddled upstream for a bit, then turned around and headed back downstream into the wind. I’ve had sore wrist and thumb recently so have set my paddles up with zero feather. This seems to help my wrist but does make matters a little more difficult when paddling into a strong headwind. It was OK though and I was soon paddling under the road bridge and heading back towards Chester. Faster paddlers were beginning to overtake me now though so on I plodded.

The Time Trial is split into two. The first part finishes back at the club house, but many people continue on and do a second time trial from the clubhouse, into Chester and back. I continued on, slowing a little and taking in the scenery as I went. The river here was quite busy. I found out later that there is a public access byelaw along this stretch of the River Dee so you don’t need a license to paddle on it. As well as us in our K1’s there were plenty of people out rowing in fast looking rowing boats. There was a sailing club, and lots of people in canoes or kayaks too. It’s a lovely spot and one I’ll have to try to get Anna and Morgan too along with the canoe that we built.

I was last back to the clubhouse. I wasn’t too far behind though and had enjoyed my paddle on the Dee. The boat I was in felt plenty stable enough – much more stable than my ski so maybe next time I’ll try something a little sleaker. That said, a nice stable platform might be just what I need to actually improve my paddling technique. Based on my speed today there must be plenty of room for improvement!

Once changed, we headed up into the main club room where I was provided with a couple of mugs of soup and some bread along with a nice chat to some of the members. I left a donation in the pot, vowed to come back for more sometime soon and have hopefully arranged a coaching session or two for sometime early next year with their coach. It’ll be good to have someone dissect my paddling stroke and give me some tips.

The sun was now shining for my trip home. Two hours or so through Wales. At home there was a nice stew bubbling away in the slow cooker for me and a parcel containing a second hand iPhone 7. An action packed weekend as usual for me.